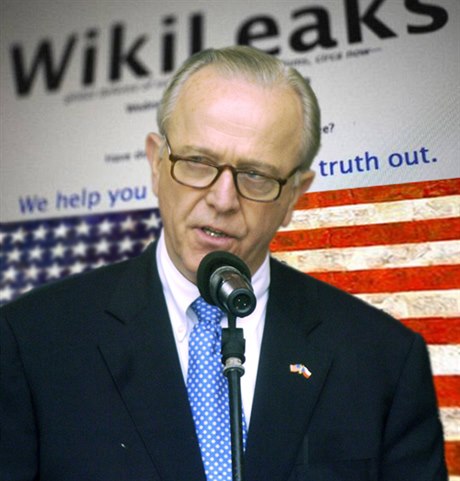 Since signing off on the leaked cables, former US Ambassador to the Czech Republic William J. Cabaniss, Jr. claimed a Czech official solicited a multi-million dollar bribe from him over the Tatra deal foto: © ČTK, CZECHPOSITION, Česká pozice 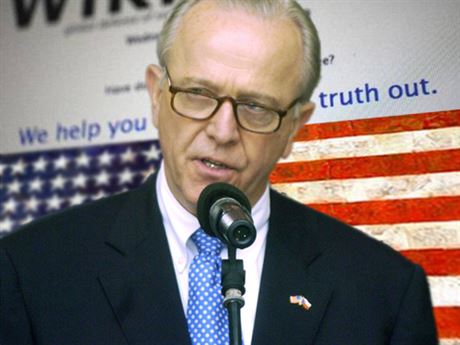 Nearly six years ago, US embassy personnel compiled an unclassified cable under the title “CZECH CORRUPTION: BAD, AND UNLIKELY TO GET BETTER SOON” signed off on by then US Ambassador to the Czech Republic William J. “Bill” Cabaniss, Jr. The dispatch has proven to be prescient.

The Sept. 14, 2005, cable, leaked by the controversial whistle-blower site WikiLeaks on Thursday — along with 658 dispatches from the US embassy in Prague over the past ten years — drew on internal statistics, as well as findings by anti-corruption watchdog groups like Transparency International and global institutions such as the World Bank to create a “snapshot” of the issue in the Czech Republic. The outlook wasn’t rosy.

While there had been a reduction in petty corruption — such as the perceived need to bribe office clerks in government offices or town halls to expedite paperwork, or to traffic police to get off fines — in part thanks to the introduction of new technology, “malfeasance by high-level officials, particularly with large public procurements” remained problematic.

Oldřich Kulík, a Czech official at the Ministry of Interior, “offered many reasons why it is unlikely that corruption in procurement, the judiciary, and the legislative process is going to be reduced in the near future,” the cable said, and went on to outline the “many ways of avoiding honest tenders”:

Part of the problem, it said, is that the Czech state seems:

Under the heading “EXPOSED DOESN’T MEAN PROSECUTED,” the US embassy cable noted that “almost without exception, headline grabbing stories quickly die down, or are replaced by the next sensational scandal, and nobody is ever held to account.”

Among those cases cited were the fact that the Ministry of Defense was looking into a no-bid contract for more than $80 million that went to an engineering firm run by a former MoD employee and controlled by arms trader Omnipol.

The Omnipol boss at the time was paying the rent on the house of the Deputy Defense Minister, who was the supervisor of the former MoD employee — and none other than current Finance Minister Miroslav Kalousek, deputy chairman of the TOP 09 party.

Meanwhile, prosecution of run-of-the-mill bribery, or abuse of power, is left to lower level district prosecutors, who typically have more than 200 cases to work on, must be in court three to four days a week and have “neither the time, the resources, nor the training to conduct investigations into allegations of corruption.”

Part of the problem is that in the Czech Republic, political parties have shielded each other from investigation. “In the current coalition of 101 members in a 200 seat chamber, the coalition cannot afford to alienate a single member. In the previous electoral term, the two main parties signed what became known as the opposition agreement and to a large extent split up the spoils,” it reads.

But the voters must also take their share of the blame.

Under the heading “IRRITATED, NOT INCENSED” the cable notes that while under the Communist regime, everyone in Czechoslovakia had to engage in “some sort of fiddle just to get by” but with the development of a robust market economy, corruption is increasingly becoming the reserve of the politically powerful and their business cronies. ‘The fact that corruption is widely acknowledged, yet tolerated, might be the most discouraging news of all.’

“The public resents that. A poll on September 6 [2005] found that the one thing that bothered Czechs most was corruption. … But the voters don’t seem outraged enough to force the parties currently in power into taking meaningful steps to reduce corruption, punish wrongdoers, or throw crooked politicians out of office. … The fact that corruption is widely acknowledged, yet tolerated, might be the most discouraging news of all.”

Betting on the Greens

A separate US embassy cable from Prague dated Feb. 14, 2006 and titled “CZECH CORRUPTION: HOW MUCH IS TOO MUCH FOR VOTERS?” noted rising and surprising support for the Czech Green Party (SZ), seen as “a promoter of clean government” a year after center-left Social Democrat (ČSSD) chairman Stanislav Gross was forced to step down as prime minister over questions about the source of money used to pay for his private residence.

Several others in the cabinet, parliament and government service were also forced to resign because of alleged ethical misconduct, noted the cable, also signed by Amb. Cabaniss, while the center-right Civic Democrats (ODS), then in opposition, were dogged by persistent allegations of corruption.

“In addition, the nation’s top prosecutor and her deputy have resigned in disgust, saying there was no political will to fight corruption. There seems to be general agreement that corruption is a serious and widespread problem. Whether officials feel threatened enough to change their rules and practices, or whether the public is incensed enough to vote for new, untainted parties remains to be seen,” it reads. ‘It is unclear whether the normally tolerant Czech electorate will see corruption, admittedly widespread, as an important election issue and vote for the Greens.’

“It is unclear whether the normally tolerant Czech electorate will see corruption, admittedly widespread, as an important election issue and vote for the Greens or some other new party promoting cleaner government, or whether an increase in the coverage of scandals could lead to greater support for the Communists, who, because they have been kept outside the corridors of power, are still untainted by corruption,” the cable says.

In fact, the Greens did garner enough support to enter parliament for the first time — but, due to infighting, they failed to repeat the feat in the 2010 elections, but the mantle was seemingly picked up by the centrist Public Affairs (VV) party, which ran on an anti-corruption ticket.

VV’s founder and de facto chairman, Vít Bárta, was forced to step down as transport minister in April over alleged attempts to bribe fellow party MPs in the so-called “cash-for-loyalty” affair, and is expected to face criminal charges if his immunity from prosecution is lifted, as he has requested.

But back to the Feb. 14, 2006 cable: The US embassy notes that government officials who fight corruption say politics plays too much of a role in the prosecution of official wrongdoing.

State Supreme Prosecutor Marie Benesová left her post in September 2005, after nearly six years of leading the fight against corruption and organized crime. In December 2005, her former Deputy, Jaroslav Fenýk, also resigned. “Both have cited insufficient will to fight organized crime and corruption, as well as political interference in the prosecution of high profile cases, as the main reasons for their departures,” the cable said.

ČSSD Prime Minister Jiří Paroubek, it said, had “done an adequate job” of defusing criticism by expeditiously sacking any party member connected to a scandal. “He has also promised to set up a bipartisan commission to make legislative and policy recommendations to fight corruption, if he is reelected.” He was not.

Jump to an October 17, 2007 (there are presumably interim cables that Wikileaks did not get hold of for publishing) signed by then US Ambassador Richard W. Graber, titled “CZECH POLITICAL DEJA VU: KLAUS, CORRUPTION, AND BACKROOM DEALS” and labeled “sensitive but unclassified” issued ahead of the presidential elections that saw Vacláv Klaus elected to a second five-year term (by parliamentarians, not through direct elections).

“In the past few weeks, Czech political circles have been seized with stories about questionable financial dealings of several leaders in both major parties, ODS and ČSSD. PM [Mirek Topolánek, ODS] has been in the headlines because of the less than transparent arrangements concerning a Volvo SUV, which he has been seen driving for well over a year.”

“After initial obfuscations, Topolánek revealed that he had borrowed the car initially and that his partner, Lucie Talmanová (ODS, Deputy Speaker of the lower house of the parliament), bought the car in the summer. Unsatisfied with this explanation, Czech media continued to pursue ‘Volvogate’ for several weeks, especially given the apparent involvement of Marek Dalik, Topolánek’s ubiquitous and unofficial adviser, fixer, and the current eminence grise of ODS politics.”

In the meantime, the main opposition ČSSD faced its own share of probing questions regarding the less-than-transparent finances of its two former prime ministers and party leaders — Paroubek and Gross. “Paroubek’s personal income became an issue because his basic salary as a deputy in the Czech parliament barely seems to cover his home loans, car payments, and living expenses. The story continues to be fueled by Paroubek’s creative accounting and explanations, some of them contradictory,” the cable says.

“At one point, Paroubek’s ČSSD colleagues even offered to open up their party’s coffers to help out their chairman with living expenses. Paroubek, however, rejected the offer, realizing that such an arrangement would only add to the media and public criticism.” ‘Topolánek and Paroubek’s problems, however, pale in comparison to those of Stanislav Gross.’

“Topolánek and Paroubek’s problems, however, pale in comparison to those of Stanislav Gross … who has worked for a law firm over the past two years, has apparently failed to learn from his ignoble departure from high-level politics. A public and political furor erupted over his acquisition and a quick sale of shares of Moravia Energo, a Czech energy company.

“The deal reportedly netted him over 100 million KC (over USD 5 million). Gross has been unable to explain satisfactorily his new-found wealth, and his investing activities are now being investigated by the anti-corruption unit of the Czech police.”

Accusations in the media never led to criminal charges against Topolánek, Paroubek or Gross; after leaving the post of US Ambassador to Prague, William J. Cabaniss claims Martin Barták (ODS), a former Czech minister of defense — now on leave from his post as deputy finance minister — solicited a bribe from him in February 2008 to smooth over a military order regarding Czech-made Tatra all-terrain trucks.

David Ondráčka, director of the Czech branch of anticorruption watchdog Transparency International, told Czech Position that no one wants to see the Barták case investigated because it could mean further opening the books on a decade of dodgy deals at the Ministry of Defense when two of the most powerful men in the country — Prime Minister Petr Nečas (ODS) and Finance Minister Miroslav Kalousek — were aware of if not themselves directly involved in corrupt practices.