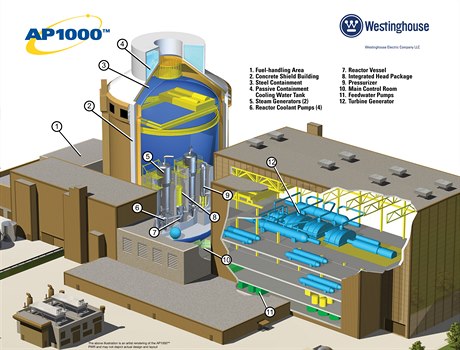 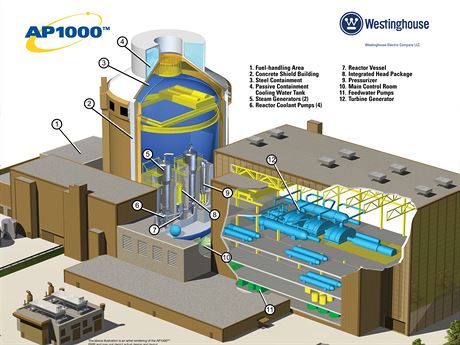 US-based nuclear power plant company Westinghouse has signed up the Czech Republic’s biggest home grown construction firm, Metrostav, in an exclusive partnership under which the Czech firm should land around a third of the value of work expanding the current Temelín nuclear power plant.

Under the exclusive deal, Metroslav will carry out basic civil construction work if Westinghouse wins the tender for building two new nuclear reactors in southern Bohemia. The total tender value is estimated at around Kč 200 billion.

The deal was described on Monday as a “milestone” in Westinghouse’s ongoing efforts to put itself ahead of rivals for the contract, French-based Areva, and a consortium of Russia's Atomstrojexport and Czech engineering group Škoda JS. The Westinghouse–Metrostav deal is the biggest exclusive partnership signed up by any of the Temelín bidders so far.

‘This agreement between Westinghouse and Metrostrav means a significant Czech content in this bid, and this bid will be an extremely competitive one from Westinghouse.’

Offers to build the reactors should be submitted to ČEZ, the 70-percent state-owned Czech electricity company that owns and operates Temelín, by July 2 this year with the power company due to make a decision on the winning bidder by the end of 2013.

US ambassador to the Czech Republic Norman Eisen said Monday that the memorandum of understanding between the companies signaled that Westinghouse meant to live up to its motto of buying where it builds.

“This agreement between Westinghouse and Metrostrav means a significant Czech content in this bid, and this bid will be an extremely competitive one from Westinghouse,” Eisen, who has made landing the Temelín contract for the US bidder one of his priorities, commented.

Westinghouse’s president for Europe, the Middle East and Africa, Yves Brachet, stressed the fact that Metrostav will be much more than just a simple sub-contracter. “Partnership means risk-sharing and profit-sharing. This is according to the delivery of each company in their part of the construction project,” Brachet said. “We expect Metrostav to have responsibility for the construction of Temelín, with construction typically accounting for 30 percent of all of the work.”

Metrostav, a company created 40 years ago for the building of Prague’s subway system, has no previous nuclear construction credentials but has experience helping build and refit conventional coal-fired power plants for ČEZ. Westinghouse does not view this as a handicap, pointing to the lack of know-how of most construction companies where it is currently building nuclear plant, such as in China.

“This is an opportunity for use to get nuclear know-how,” Metrostav general manager Pavel Pilát commented. He added that the company was also approached to team up with the other Temelín bidders. “This was the most interesting bid that we had with regard to the realization of the Temelín project,” he said, adding that the exclusive nature of the deal closed the door on cooperation with the other bidders even if they are chosen ahead of Westinghouse as the contract winner.

Metrostav’s slice of the potential work on Temelín covers most of the construction work on site, expected to require around 3,000 workers at its peak, in which its local connections will be exploited in the selection of sub-contractors.

‘This is an opportunity for use to get nuclear know-how.’

One aspect of construction that will not be covered is the production of modular sections of the plant, for which Westinghouse still has to make a decision where this work will be sited in Europe with regard to the Czech tender and other nuclear construction planned in Britain and Poland. “The Czech Republic will be considered for this as well,” Westinghouse’s Brachet said. Site selection did not need to take place before Westinghouse submitted its bid because the costs could easily be estimated, he added.

The prefabricated module units, such as the base of the reactor, account for around 10 percent of the overall reactor construction and help to ensure that construction deadlines are met, say Westinghouse managers.

One awkward moment in Monday’s news conference over the announcement of the MOU came with a question about Metrostav’s tarnished reputation with regard to time and cost overruns and suspicion that it had been involved in corrupt contracts.

The most embarrassing recent episode for the company came with a series of collapses at the Blanka tunnel complex, the biggest ongoing construction work in Prague which should help complete part of an unfinished  motorway ring around the capital. The costs of the project has soared from an original Kč 26 billion to Kč 36 billion. Metrostav’s Pilát said the higher costs were the result of extra demands being introduced by the client, Prague City Hall, and said that there was no suggestion of negligence on behalf of the company.

Metrostav would be helped by any major construction projects coming its way. It has seen profits in 2010 falling to Kč 714 million from Kč  718 million in 2009 and  Kč 814 million in 2008. The workforce was cut in 2010 to 3,071 from 3,199. Nevertheless, Metrostav claims to have fared better than most rivals during the downturn, which is estimated at having resulted in an 8.0 percent contraction in the sector in 2010. Metrostav is majority owned by the DDM Group company.

Previously, Westinghouse signed an exclusive contract with Czech cables firm I&C Energo for it to be the sole supplier for the Temelín contract. While ČEZ has not put down any criteria for local contracts in its contract terms, a former Czech minister of industry said that a high amount of work being offered to local companies would be looked at favorably when Temelín bidders were being compared.