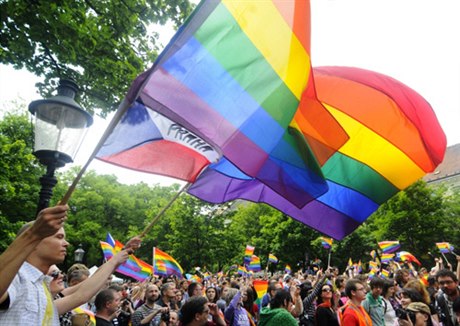 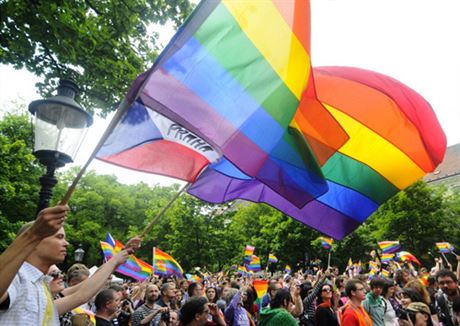 Ladislav Bátora, the Czech Education Ministry head of human resources whose appointment sparked outrage among human rights activists due to his ties to a far-right party, has co-authored a letter to US Ambassador Norman Eisen condemning the American embassy’s support for Prague Pride, the capital’s first gay and lesbian festival that kicks of this week.

“This event is organized by groups of homosexuals and lesbians whose demands against the Czech public significantly exceed the framework of mere tolerance,” Bátora said in a letter to Eisen co-signed by other representatives of the conservative initiative D.O.S.T. (“Trust, Objectivity, Freedom and Tradition”) whose acronym translates as “enough.” The signatories also called on Prague Mayor Bohuslav Svoboda (Civic Democrats, ODS) to withdraw his office’s auspices from the event.

It was the latest salvo in the escalating war of words among Czech politicians over the event. Earlier last week, the deputy head of the Presidential Office, Petr Hájek, attacked fellow center-right politicians for lending their support to Prague Pride, which he called a “political demonstration … for a world in which sexual or any other deviation becomes virtue,” and called for Mayor Svoboda to resign for supporting the event.

“This is a serious political demonstration of certain worldwide value visions. There are visions where the classical family plays no role, where deep rooted national and cultural traditions collide with multiculturalism,” Hájek, who recently made headlines for suggesting Osama Bin Laden’s death and life were nothing but “a media fiction,” wrote on the website ParlamentníListy.cz last week. “It’s a world where sexual or any other type of deviance is raised into a virtue, abnormality as the norm and the destruction of society as sacred progress.”

The Festival of Tolerance or Prague Pride 2011 event, organized by the PROUD platform, takes place from August 10-14, culminating on August 13 with a march through the Czech capital. Organizers have said they could not have hoped for a better advertisement for their showing of concerts, film screenings, and the parade than the statements made by Hájek and later by President Václav Klaus in his defense.

Svoboda, meanwhile, has said the city is not lending financial support to the event but he had lent his name to back it and would not withdraw it. “Homosexuals live among us, and there is no point in pretending they don’t. Moreover, it goes against my soul to create divisions between people because of their sexual orientation, skin color or religion. In the past such divisions have proven to be more than disastrous,” the Prague mayor said.

All major gay pride events in the Czech Republic have been subject to attack or counter demonstrations from extreme right-wing groups since the first major event staged in the Czech Republic’s second city, Brno, in 2008. Around 150 extremists showed up for that event with tear gas being thrown at the gay, lesbian and trans-gender marchers during the main parade.

Czech President Václav Klaus, meanwhile, has refused demands by the main opposition Social Democrats (ČSSD) and centrist junior coalition party Public Affairs (VV) to distance himself from Hájek’s remarks. “The statements were not made by me, and I would probably have chosen different words. However, I also feel no ‘pride’ about this event,” Klaus said in a statement on his website. “It is one thing to tolerate something, but it is quite another to give it public support in the name of an important institution.”

Klaus went on to say that he considered Hájek’s use of the word “deviants” to describe homosexuals as value-neutral. “In any event, while homosexuality is something that is markedly in the minority and therefore deserves our protection, it does not necessarily deserve to be celebrated,” the Czech president said, stressing that it is one thing to respect homosexuality and quite another to promote “homosexualism.”

“Prague Pride is not a demonstration of homosexuality but of homosexualism, about which I am very concerned, as I am about many other fashionable -isms. This is also the position I publicly took when I vetoed the law on registered partnerships in 2006,” said Klaus, who has not commented on the open letter by D.O.S.T. and Bátora, whom he has publicly defended in the past.

For his part, the chairman of the Prague Pride event, declined to take the bait. “There is no point in responding to this latest ‘Klausism,’” said Czeslaw Walek, a former Czech Deputy Minister for Human Rights, who stressed that the event is not “a festival about ideology but about entertainment and respect.”‘Prague Pride is not a demonstration of homosexuality but of homosexualism, about which I am very concerned, as I am about many other fashionable -isms’

The Embassies of Austria, Belgium, Canada, Denmark, Estonia, Germany, the Netherlands, Norway, Spain, Sweden, Switzerland, the United Kingdom and the United States in an open letter on Friday expressed their support for the rights of Prague Pride participants to hold a legal, peaceful march to raise awareness about specific topics concerning them.

“We express our solidarity with the lesbian, gay, bisexual and transgender communities in the Czech Republic, supporting their right to use this occasion to march together peacefully and lawfully, in order to raise awareness of the specific issues that affect them,” the embassies said in their joint statement.

The British Embassy said that the joint statement was not connected to the statements by Klaus and Hájek, the Czech news agency ČTK reported. On Monday, the Czech president said he considered the embassies’ letter an “unprecedented step” and that he could not imagine any Czech ambassador would dare try to use a petition to influence political discussion in any democratic country.

“The ambassadors should know that the debate in our country was not about whether or not to permit this manifest action of homosexuals but about its public support by a prominent member of a right-wing conservative party, the Mayor of the city,” Klaus said on his website.

In the past, the US embassy has supported the work of Queer Film Festival Mezipatra, a specialized competitive film festival focusing on gay, lesbian, bisexual, and transgender (GLBT) related films.

Early last week, a group of Czech senators called on Prime Minister Petr Nečas (ODS) to secure the dismissal of Bátora from his post at the Education Ministry over his connections to the extremist National Party (NS) and participation in lectures organized by the ultra-nationalist Patriotic Front (Vlastenecká fronta).

In the 2006 elections, although technically an independent, Bátora was the election leader of the NS, which openly denied the Holocaust of the Roma minority and advocated the “emigration of the Gypsies currently living in the territory of the Czech Republic to India.” In 2007, the NS’s youth organization planned a march through Prague’s Jewish Quarter to mark the anniversary of the anti-Jewish pogrom in the Third Reich known as Kristallnacht, the Night of Broken Glass.

“It is unacceptable that people with such extremist pasts can occupy high-level government posts and participate in the governing of our country. It is unacceptable for the government to tolerate and approve such persons in these posts,” senators from the ČSSD, Christian Democrats (KDU-ČSL) and ODS wrote in their open letter to Nečas.

Czech Education Minister Josef Dobeš (Public Affairs, VV) has defended Bátora as a “loyal scholar of the nation” and a Catholic and claims there is no evidence that he is a racist.