Czech composer Viktor Ullmann was killed in the gas chambers of Auschwitz; new performances give his music a new and vibrant life 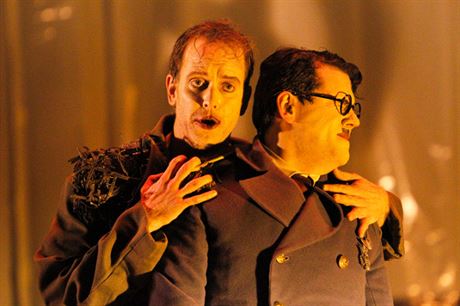 Of all the art forms that experienced a modernist renaissance in Central Europe in the first few decades of the 20th century, music was paramount, simultaneously advancing on and reconnecting with the German musical tradition of Bach, Mozart and Beethoven. The Czech contribution to this artistic flowering was considerable, ranging from Prague and Brno’s rich musical life, to Czechs gravitating to the artistic mecca of Vienna, to the exceptional generation of Jewish composers whose tragic ends coincided with the end of modern music’s golden age.

While the music of the era’s most prominent composers, such as Arnold Schoenberg and Alban Berg, has long been part of the repertoire, there remain many talented, even brilliant, composers whose work is much less widely known. Viktor Ullmann, born in Český Těšín in 1898, is one of these composers, and pianist Jeanne Golan, in performing and recording all of Ullmann’s piano sonatas, is trying to restore the composer to his rightful place while turning a spotlight on the tremendous bravery and artistic vision he and his fellow inmates of Terezín showed in creating art up to the very end.

Golan’s introduction to Ullmann’s music didn’t come about by her looking into the darkness of Europe’s past but through a musical affinity.

“I work a lot with living composers and one of them came across the scores of the Ullmann sonatas and looked at them and thought of me. So he called me and said, ‘I think I have a composer that you should play.’ It was a little bit of matchmaking, and it’s worked out beautifully,” Golan told Czech Position.

Even without taking his murder by the Nazis into account, Ullmann’s career was extraordinary. His family moved to Vienna when he was nine to further his education. Ullmann served in the army in the First World War, after which he returned to Vienna to study law and continue his musical education, with his musical skill confirmed by acceptance into Arnold Schoenberg's Composition Seminar.

Just a year later though, Ullmann married fellow composition seminar student Martha Koref and moved with her back to her native Prague. Immersing himself into the rich musical life of the newly established Czechoslovak capital he worked at the New German Theater under Alexander Zemlinsky.

Ullmann continued composing throughout the decade, seeing his work performed in one case on an “Evening of Prague Composers” together with composer Hans Krása, who would later join him at Terezín and Auschwitz. The other Czech-Jewish musical figures transported to the gas chambers in October 1944 were Pavel Haas and Gideon Klein.

In the late ‘20s a personal and spiritual crisis caused Ullmann to turn away from music as he explored psychoanalysis, spiritualism and especially Rudolf Steiner’s anthroposophy movement. This led to his attempt to run an anthroposophical bookstore in Stuttgart, a venture that failed and sent him back to music with what Golan says was an renewed and strengthened seriousness.

Golan says that while she considers Ullman’s sonatas accessible they contain a striking number of levels of reference, a modernist characteristic he was able to draw on due to his thorough and wide-ranging musical education. “Ullmann studied with Schoenberg, so he was well-schooled in that, but was equally well-schooled in all of the German Romantics, and Haydn, Beethoven and Bach, as well as cabaret. And he folds it all into the sonatas.”

Ullmann was sent to Terezín, or Theresienstadt, in September 1942, and Golan says that among the artistic detainees his arrival was seen as a coup. Remarkably, Ullmann became extremely active in the camp’s artistic life, a life that was allowed to go ahead because of the Nazi’s attempts to have Terezín viewed as a humanitarian relocation camp. Regardless of its rational Ullmann was extremely active at the camp, being in charge of assigning practice rooms for musicians, writing music reviews in a camp journal and starting evenings of new music to give exposure to Terezín’s young composers.

Nevertheless, the sinister outside world couldn’t be kept out altogether. “Ullmann lost his wife in the first few months that they were there. In that autobiographical way the first sonata he wrote when he was there was dedicated to her memory. The slow movement is absolutely heartbreaking,” Golan said.

Considering the brutality they faced it is amazing that such exceptional music was composed and performed at all. One characteristic of Ullman’s music that broke through the harsh emotional and physical conditions at Terezín is humor. “He must have had a wickedly funny sense of humor because there are some really clever things that he does,” Golan said. “I think the thing that surprises people who knew what Terezín was is how much joy there is in the music, even charm, and how much defiance or triumph in the ways he brings the music round.”

Golan acknowledges that it can be helpful to know the circumstances in which Ullmann composed and performed his music in Terezín, but it is not as fundamental as the music itself. Performing all of Ullman’s piano sonatas means she is reuniting music composed in freedom in Prague with that composed at Terezín.

“It’s always been my approach to let the score reveal itself. And if there’s something in the score I don’t understand that I can better understand by knowing the circumstances surrounding the piece, then absolutely I’ll look at that, too.”

Golan says she usually gives audiences an introduction so they have a better idea of what they are listening to as well as some features to listen for. One of the paths to enter into Ullmann’s music was provided by the composer through his use of recognizable melodies adapted into his work.

While Ullmann’s music is Golan’s top priority, one aspect of devoting so much time to it that Golan cherishes has been the opportunity to meet Holocaust survivors who knew the composer. Having contact with people that can bear witness to his performances as well as to the demeanor with which he faced the murder going on around him is all the more valuable as the window of opportunity to have first-hand contact with survivors is closing almost 70 years after the end of the war.

Not only has Golan met audiences of Ullman’s music, she has even come to know one of its performers. Pianist Alice Herz Sommer was born in Prague in 1903 and at 108 years old is considered to be the oldest Holocaust survivor alive. One aspect that Sommer’s testament brought home was the sheer amount of music played at Terezín. In the three and a half years Sommer was at Terezín she played up to 300 concerts.

What emerges from this dark chapter of history is a powerful chapter in music and cultural history, a small renaissance of Central European Jewish art carried out with heroism, creating beauty in a world in which it was in short supply. With their fate sealed a group of extremely talented musicians used their art to keep themselves human. Ullmann said as much himself, writing:

“It must be emphasized that Theresienstadt has served to enhance, not to impede, my musical activities, that by no means did we sit weeping on the banks of the waters of Babylon, and that our endeavor with respect to Arts was commensurate with our will to live. And I am convinced that all those who, in life and in art, were fighting to force form upon resisting matter, will agree with me.”

To listen to Ullmann’s seventh and final piano sonata, composed less than two months before he was killed at Auschwitz click here.