Czech politics has developed quite differently from how Havel imagined, but he said we’ll manage. Thanks for your faith, Mr. President! 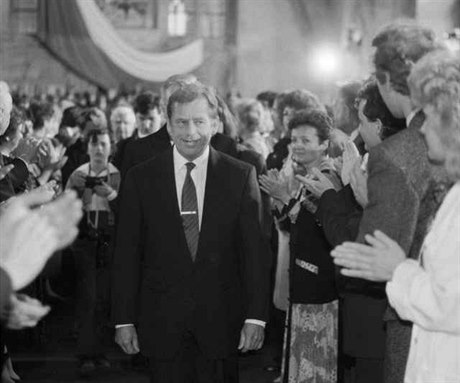 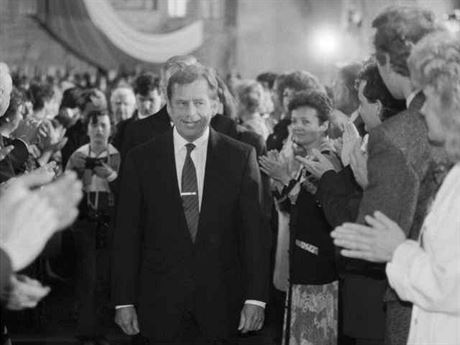 Former Czechoslovak president Alexandr Dubček was also considered, but on December 8, 1989, the Civic Forum (OF) nominated Václav Havel as their presidential candidate. On December 10, communist president Gustáv Husák officially appointed the federal government then stepped down. The same day the Civic Forum (OF) publically announced their choice of Havel, the dissident playwright and anointed leader of the Velvet Revolution.

Marián Čalfa, a member of the previous communist government headed by Ladislav Adamec, was appointed chairman of the first post-communist federal government. Although still a member of the Communist Party of Czechoslovakia (KSČ), it was Čalfa who behind the scenes engineered the election of Havel as president by the Federal Assembly of Czechoslovakia, including the hitherto all-powerful apparatchiks of the KSČ, on December 29.

When sworn in as president, Havel took the presidential oath according to the Constitution of the Czechoslovak Socialist Republic (ČSSR), which guaranteed the leading position of the KSČ in society and the federal status of the joint state of the Czech and Slovak peoples. Havel was soon to initiate the abolition of these provisions.

The division of Czechoslovakia

Havel didn’t want to assist in the breakup of Czechoslovakia and when the freshly-elected Federal Assembly repeatedly did not endorse his role as president of the ČSFR, he resigned on July 20, 1992.The clause of the Constitution guaranteeing the leading role of the KSČ was soon dropped with ease. However, Havel’s proposal to reinstitute the country’s original name, the Czechoslovak Republic, sparked the so-called hyphen war in the spring of 1990. Eventually, the country was renamed the Czech and Slovak Federative Republic, but in terms of the rules of Czech grammar, the name was incorrect: “Slovak” and “Federative” should be spelled with small initial letters, but the error was allowed so as to satisfy the Slovaks’ ambition to be a genuinely equal partner. Eventually, it proved not to be nearly sufficient.

It can be said that while hyphen war accelerated the Slovak’s move towards emancipation, the process was inadvertently initiated on October 28 with the declaration with the imposition of the so-called “normalization” policy following Soviet-led invasion of Czechoslovakia. Obviously the normalization period also served to delay the process.

Twenty-four years later, in conditions that were no longer totalitarian in any way but still not completely democratic, there was no one to put the brakes on the process and following the parliamentary elections in 1992, Czechoslovakia moved unstoppably towards its demise. Havel didn’t want to assist in the breakup of Czechoslovakia, and when the freshly-elected Federal Assembly repeatedly did not endorse his role as president of the ČSFR, he resigned on July 20, 1992.

Although Havel did not wish for the breakup of Czechoslovakia, it nevertheless took place peacefully and orderly, and because he was a serious potential candidate for the post of President of the Czech Republic he eventually accepted it as the only solution in the given circumstances. However, several Czech politicians played an underhand game with him. Not only the Civic Democrats (ODS), but also the Czechoslovak People’s Party and especially the Christian Democrats’ Josef Lux, suggested that the last prime minister of the ČSFR, Jan Stráský, could became the first President of the Czech Republic.

The first and second Klaus governments

Thanks to Havel’s international profile which held the promise of opening doors to the rest of the world to the newly formed Czech state, he was elected president on January 26, 1993, and was reelected for a second term on January 20, 1998. In comparison to the Czechoslovak presidential post, however, his powers were limited: he could not formerly initiate legislation, for example. Therefore, Havel had to “smuggle” his own initiatives into parliament via several of the coalition parties. His “own” party, the Civic Movement (OH), however, struggled within the coalition governments it joined.

Havel’s relations with the new prime minister Václav Klaus were mostly tenseIn the elections of 1992, the OH failed to win any seats in parliament and Havel’s relations with the new prime minister Václav Klaus (ODS) were mostly tense, in sharp contrast to those with Klaus’ predecessor, Čalfa. As of the summer of 1994, the Civic Democratic Alliance (ODA) and the People’s Party (already in alliance with the Christian Democrats, KDÚ–ČSL) moved somewhat closer to Havel after confidence in Klaus’ coalition government plummeted. The ties strengthened under Klaus’ second government, which did not have a majority. Soon after the elections of 1996, Klaus’ party, the Civic Democrats (ODS), was thrown into crisis and eventually fell in November 1997 after phantom sponsors were exposed and the KDU-ČSL and ODA refused to continue cooperating with them.

Due to the 1996 election results, in which the ODS won more votes than any other party, Václav Klaus should have had first choice to attempt to assemble a new government. However, the leaders of the ODA and KDU-ČSL, Jiří Skalický and Josef Lux, told Havel that they could not enter a new government led by Klaus because he had been compromised. At the same time, the Czech National Bank (ČNB) warned the president about the impact another political crisis could have upon the exchange rate of the Czech crown and other economic consequences.

In 1999 and 2000 Havel confided to several friends that he was considering resigning.The following interim government comprised of several experts from the ODA, KDU-ČSL and ODS defectors to the newly founded Freedom Union (US) and headed by the head of the ČNB Josef Tošovský. Had Havel named Klaus prime minister, given the atmosphere at the time, he would probably not have succeeded and would have been defeated in front of the public eye for the first time.

As a consequence of Havel shunning Klaus, the ODS was able to wear the crown of thorns of a martyr and the party began to rebuild its support base. In the early elections in June 1998, the ODS won 27.7 percent of the vote, finishing a close second behind the center-left Social Democrats (ČSSD) headed by Miloš Zeman.

With the ČSSD collecting 74 of the 200 seats in the lower house of the Czech parliament Zeman formed a minority government but sealed a cooperation agreement, dubbed the opposition contract, with Klaus and the ODS. Together Klaus and Zeman pressed the depressed president into a corner, made his life difficult and drafted changes to the Constitution considerably limiting presidential powers and to the election laws which served to squeeze smaller parties out of contention for parliamentary representation.

In 1999 and 2000 Havel confided to several friends that he was considering resigning. At a meeting at the official presidential country residence in Lány, one wise man who is a prominent member of the current government reportedly told him something along the following lines: “President Václav! You are performing a service which you chose of your own free will when you stood as a candidate for a second time, in 1998. Unless there are genuinely serious and insurmountable reasons, it is your duty to carry the burden.”

Development in a different direction

The tentacles of corruption, which he spoke about in his famous speech at the Rudolfinum in Prague on December 9, 1997, that immediately lost him the support of the ODS, took deeper root under the so-called opposition contract. Despite of all this, Havel didn’t succumb to pessimism.

As a private citizen following his presidency as a renowned figure around the world, Havel rarely commented on domestic politics, but when he did he did not only criticize, he was encouraging and expressed hope. In one of his last appearances on television he voiced his opinion that a challenging time lay ahead, but it wouldn’t be catastrophic. In his judgment we’re moving in the right direction and we shouldn’t be afraid because we’ll eventually manage. Thanks for your faith, President Havel!