Utopia at a Prague museum

Curator Milan Knížák’s contribution to ‘Spare Time’ is uninspiring, yet the exhibit showcases a clever array of out-of-the-ordinary artworks 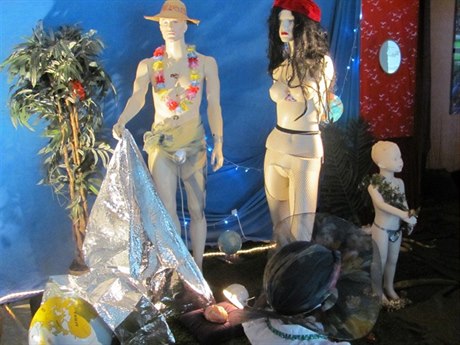 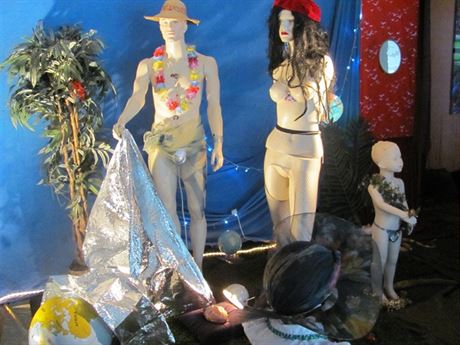 Spare Time (Volný čas) is an exhibition at the Veletržní Palace in Prague meant to show artworks that fit outside the bounds of traditional notions of art. The project comes out of a broad international cooperation with arts institutions in Latvia, Bulgaria and Sweden, and also contains significant contributions from Russia, the Netherlands and Switzerland.

The Czech focus of the project is on the phenomenon of “tramping.” Curated by Milan Knížák, the former head of the Czech National Gallery, the exhibition blandly domesticates a phenomenon of the outdoors by lining the museum’s white walls with photographs of tramping activities. The building of cabin-like structures to take up some of the empty, unused floor space only adds to the sterile effect and shows what a missed opportunity this was.

Tramping has a distinguished history among Czech artists and writers. The photographs showing artists relaxing and clowning around at their summer settlements in the 1930s are a virtual “Who’s Who” of Czech interwar culture. Seeing painter Emil Filla and composer Hans Krása, for example, passing carefree hours in the Bohemian forest — knowing that within a decade they would both be sent to German concentration camps — is particularly poignant (Filla survived confinement at Dachau and Buchenwald; Krása died at Auschwitz).

At the opposite end of the spectrum from the detached contemplation of photographs on white walls is the show “Utopia on the Abyss,” an exhibition primarily consisting of Czech and Swiss artists, curated by Zurich artist Mark Divo.

Divo calls it “inhabited sculpture” and explains it as a break from the accepted western notion of the art work as commodity. “What does it mean — we buy a Rembrandt, a Picasso, a Warhol. Then we bring it home, open a bottle of Chateau Mouton Rothschild 1962, look at the painting, smile and then put it back in the bank safe where it belongs.”

Inhabited sculpture diverges from this model in a number of ways. One, you are meant to spend time around and even in contact with the art itself. Petr Motyčka’s work “Doctor Sadofsky’s Archive” is essentially a small office room collecting posters, photographs, recorded meeting and an array of documents from the Global Student Union, a communist-fronted youth organization that more or less disappeared with the end of the Cold War. Visitors to the exhibition are encouraged to sit at the desk and browse through the old black and white photos and sheaves of documents.

Darina Alster’s video-automat takes audience participation one step further, being essentially a background that visitors can linger in while a camera films them and shows the results on the gallery floor below. The exhibition also includes work by Markéta Jáchimová, whose ice bust of President Vaclav Klaus led to some controversy when it was exhibited in 2010, as well as a large portrait of Karl Marx composed of sponges created by Divo himself, titled “soft communist.”

One of the most striking works in the show, though in many ways as off-putting as the other pieces are inviting, is “Naturleza Muerta,” in which Swiss artist Thomas Hammerli restages the gory press photos of Mexico’s drug wars with the artist posing as the various corpses.

Another way the exhibition veers from standard notions of art is the emphasis on collective authorship. Divo pointed out examples where one of the artists had finished their work and then painted or otherwise put their hand to another artist’s piece. “There are some pieces that have no recognizable authorship,” Divo said. “This is art that brings people together and breaks down borders.”

One aspect of the exhibition that Divo was plainly discontent with was the lack of support and cooperation from the National Gallery — something he says had become standard procedure under Knížák. “They end up creating chaos, making agreements with people and not sticking to them,” Divo said. The “Utopia on the Abyss” exhibition has a couple large-scale pieces that were simply left from a previous show without being removed.

Oddly, the Czech exhibition website has more information and photography relating to the shows in Latvia, Bulgaria and Sweden than the current exhibition in Prague. And while the “Utopia on the Abyss” blog site has information on all its participating artists and a full range of concerts, seminars and events, the same cannot be said for the rest of the “Spare Time.” In fact, for the other shows, the only information available are the titles of the exhibition sections and curators’ names. The press section of the website remains under development.

Under the very loose umbrella of the theme of free time, the exhibition contains a number of other interesting sections. Czech-born Canadian émigré artist Lumir Halik curated a small yet bizarre section with variations on the practice of stuffing dead animals. An exhibition section titled “Russian Roulette,” curated Tomáš Glanc, includes not only photographs of DIY objects from Vladimir Arkhipov, such as those included in the recently opened Ostalgia exhibition in New York’s New Museum, but actual objects and the stories behind them.

The show is rounded out with a photographic display of the role of nudism in Germany and a much more substantial collection documenting youth movements and counterculture scenes in the Netherlands through posters and photographs called Be a Rebel! Youth Movements in the Netherlands since 1965 curated by Gerrit Jan De Rook.