US astronaut who took Krtek (‘Little Mole’) puppet on board the space shuttle Endeavour says it was in fact a six-man, two-mole mission 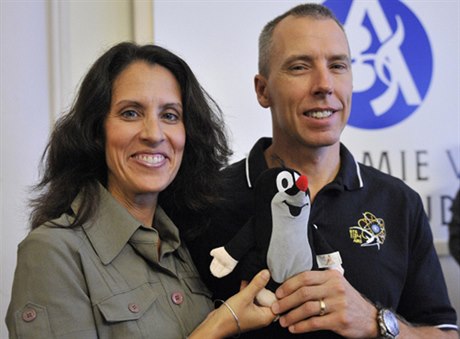 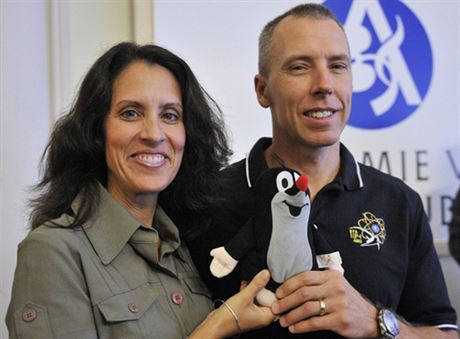 The US astronaut who took the beloved Czech cartoon character, “Little Mole,” or Krtek,  into space revealed some secrets about their shared mission on board an Endeavour space shuttle flight as he received an honorary prize in Prague on Monday.

Andrew Feustel admitted that two puppet moles were actually taken on board the Endeavour six-man mission in May. As well as the larger 19-centimeter “Little Mole” puppet accompanying him in Prague, a smaller version of the world-famous cartoon character was also taken on board the shuttle. That smaller version was presented at the weekend to his creator, the Czech animator Zdeněk Miler, who drew the first Krtek cartoon way back in 1956.

‘We know this is the real Krtek because he has Velcro eyes.’

Feustal fished out the larger 19-centimeter version of the mole astronaut at a news conference in Prague on Monday, where he received an award from the Czech Academy of Sciences for his contribution to propagating science, research and humanitarian ideas. “We know this is the real Krtek because he has Velcro eyes,” Feustel said, fishing the puppet character out of a bag. “Lots of things have to be made of Velcro in space to stop them floating around,” he added.

Feustal became the third astronaut to be award the Czech prize, following in the footsteps of John Blaha and the last man on the moon, Eugene Cernan, both of whom had Czech roots.

The larger Krtek will accompany Feustel and his family on a new, one-week mission around the Czech Republic to talk about his two NASA trips into space at the invitation of the Academy of Science — which hopes the trip and speaking tour will help inspire interest among Czech children in mathematics and science. “It is necessary to develop an interest in science in children in middle schools or earlier,” Academy of Sciences chairman Jiří Drahouš said.

The US astronaut seized on the idea of taking the Czech cartoon character thanks to his wife, Indira, whose Czech mother brought her up on the adventures of the animated animal. On a previous mission in 2009 on the space shuttle Atlantis, Feustel carried a Czech flag and copy of one of Czech poet Jan Neruda’s “Cosmic Songs” (Písně kosmické).

‘It is quite evident he is popular here and in the rest of the world. Maybe Disney is flooding the market.’

Indira said she was at a bit of a loss why the Czech cartoon character — a hit around much of the world — was not better known in the US.  “It is quite evident he is popular here and in the rest of the world. Maybe Disney is flooding the market,” she commented, referring to the US animation empire. “But it is more special this way,” she added.

Feustel said he counted on going into space again in spite of NASA’s ending of the shuttle program and the reliance on Russian and later commercial US spacecraft to provide future transport. “I joined [NASA] in 2000, and I do not think I am ready to retire right now from the astronaut business. We will be doing everything we can to support the return of Americans to space in US-built vehicles,” he commented.

He said that the biggest impression that space flight made on him was the fact that earth appeared so fragile and without man-made boundaries. “You look down and you see countries as a whole and do not see the boundaries. It all looks so peaceful and it is hard to imagine some of the problems which are occurring down below,” Feustel added. “It is very important for us to work hard together and care for the planet. We may be separated by countries or religions, but we are all humans on this planet.”

The US astronaut will long-term also be promoting in cooperation with the Czech Academy of Sciences a pupils’ program aiming at putting selected school students and schools in touch with science companies. Feustel promised to do what he could to use his contacts to develop links with US companies and research labs as well.

The animated Krtek took to space in the third series of the cartoon character in 1965, where he flew to a deserted island and was helped to repair his rocket by a crab. Known as “The Little Mole” in English, the character became popular across the communist and post-communist world including Cuba, China, Eastern Europe and Vietnam and made inroads into Western Europe.