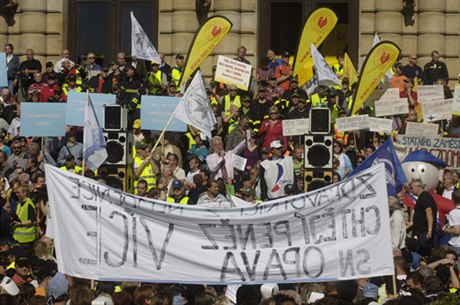 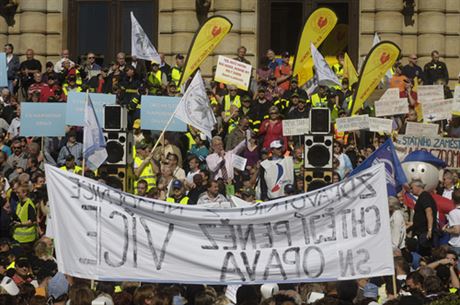 National train services and public transport in Czech large towns, including Prague, will come to a screeching halt on Monday, June 13, due to a major strike of transport workers. Union leaders say there is no room to negotiate with the government over unpopular planned reforms and are calling upon the general public to support their cause — and they don’t rule out extending the strike action.

“The coalition of transport unions has exhausted all negotiation options and declares a transport strike against the unfair and deceitful reforms, which are harmful for the majority of citizens,” leader of the train drivers’ union, Jindřich Hlas, announced on Friday after 13 transport unions and unions representing other sectors, agreed to the 24-hour strike. “Together, we will resist the devastation of the lives of the majority of citizens of the Czech Republic,” Hlas added.

In their declaration, the unions restated their opposition to raising the retirement age, cutbacks in employee benefits and planned pension and healthcare reforms. “A retirement age of 70 is a risk to peoples’ health and is a mockery of employees in demanding professions,” Hlas said reading the joint declaration to journalists gathered in front of Trade Unions house in Prague. A question as to whether any metro services will run in Prague on Monday provoked peals of laughter from the union heads.

Not only will public transport in the capital be affected: “Prague has a number of trunk roads, so these trunk roads will be affected,” the chairman of the Association of Independent Trade Unions (ASO), Bohumír Dufek, told reporters, adding that a protest march will be held in Prague. Public Transport workers in Brno, Olomouc, Plzeň, Ústi nad Labem , and other towns also plan to strike.

“For now, we are not resorting to include air transport, but if it will proves necessary, we will be prepared,” chairman of the Transport Union (OSD) Luboš Pomajbík said in response to a journalist’s question.

The chairman of the Czech-Moravian Confederation of Trade Unions (ČMKOS), Jaroslav Zavadil, warned of more strike action if the government does not heed their demands. “We don’t rule out that the strike will be prolonged. We call upon the government to get reasonable and begin to consider our proposals because otherwise it could happen that the strike will have totally different dimensions, which I personally would not be happy to see,” Zavadil said.

Zavadil told reporters that at the last round of negotiations with the government, Prime Minister Petr Nečas (Civic Democrats, ODS) had promised to call him by this Friday morning to communicate the government’s initial assessment and position on the proposals put forward by the unions. Nečas failed to call, he said.

Reacting to the announcement, Finance Minister Miroslav Kalousek (TOP 09) said he had expected the unions to go out on strike. “There’s an exceptional appetite for a show of power, regardless of how negations will or will not proceed,” Kalousek said in an interview with Czech Television 24 (ČT24). “When I hear that the strike is to be staged over tax reform, I have to smile. The proposed tax reform is currently in the comments and observations process, where there’s a space for the unions’ observations and objections. Therefore, officially, I don’t even know what their objections are.” ‘[We] will not bow to acts of pressure that take the citizens of the Czech Republic as a human shield or as hostages.’

Nečas called a press conference to condemn the planned strike action. “I fully respect the right to strike as an expression of protest. Nevertheless, I consider it unacceptable if such a protest blocks the functioning of the state and its economy and interferes in the lives of all its citizens. Therefore, the government will not bow to acts of pressure that take the citizens of the Czech Republic as a human shield or as hostages,” he said.

“The unions didn’t come with rational arguments to the negations on the proposed reforms; they simply negated them outright. It appears that, according to the unions, the best reforms would be no reforms at all,” Nečas said, commenting on earlier negotiations with unions. He warned that abandoning the reforms would eventually lead to the Czech Republic facing a debt crisis similar to those experienced by Greece, Ireland and Portugal.

The main opposition center-left Social Democrats (ČSSD) denies influencing the unions’ decision in any way, though it declared support The strike could be the largest in the Czech Republic since the fall of Communism.for the strike action.

“The [ČSSD] supports the demands over which the unions will demonstrate and strike. At the end of the day, it’s a consequence of the government’s inability to find a way to communicate with social partners,” the party’s deputy leader, Zdeněk Škromach was cited as saying by Czech Television.

The strike looks likely to be the largest in the Czech Republic in the post-Communist era. In 1997, a five-day strike by rail workers caused the widest disruption to citizens, though municipal public transport was hardly affected. Then the rail workers’ demands were limited to their profession and the management of the country’s rail network and service.

In 2008, ČMKOS unions held a strike in protest against reforms planned by the government of Mirek Topolánek, which halted 80 percent of train services and some local public transport services, though only for an hour and a quarter.