Tomáš Sedláček: economics is all about morality

Czech economist argues that ‘every single, most stupid or casual purchase or decision is really a moral purchase, a moral decision’ 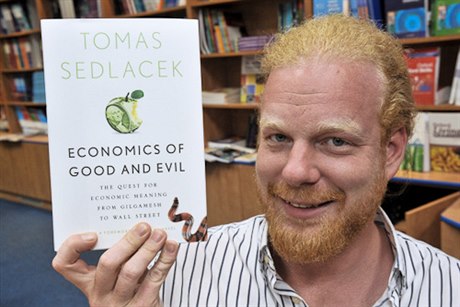 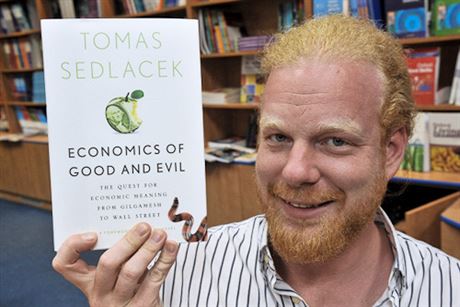 Welcome to Starbucks. Thanks for ordering an ice mocha Frappuccino made with our premium free-trade, environmentally conscious “Save the Children” coffee blend. Would you like some philosophy with that? No?

Too bad, says Czech economist Tomáš Sedláček, because you already bought it. In fact, many of the goods we buy every day are priced according to their brand and the purported philosophy they represent. The actual content, he says, is almost incidental.

“Ninety percent, or even more, of the price is ideology, myth, story, some sort of image-making, et cetera, et cetera. And there’s a huge gap between the coffee itself and what we perceive [we’re drinking]: the story we buy when we drink it,” he says

Sedláček adds that “every single, most stupid or casual purchase or decision is really a moral purchase, a moral decision.”

‘Economics is nothing else than a value system in disguise.’ The 34-year-old Czech author, hailed as one of the “five hot minds in economics” by the Yale Economic Review, says it’s time average consumers stopped blaming Wall Street for the global financial crisis and looked to themselves instead.

“There is a nice paraphrase of the ‘Fight Club’ movie, or the book from Chuck Palahniuk,” Sedláček says, “when one of the main characters says to the other, ‘We work in jobs that we hate so that we can buy things we don’t need.’”

Sedláček goes the next step: he thinks we’ve been buying things we don’t need with money we don’t have. Hence the financial crisis.

Bringing philosophy back to economics

His provocative and bestselling 2009 book “The Economics of Good and Evil: The Quest for Economic Meaning from Gilgamesh to Wall Street” has recently been published in English. In the book, Sedláček offers readers an unconventional history of economics, incorporating thinkers like 13th-century theologian Thomas Aquinas and Enlightenment philosopher Adam Smith in an effort to deconstruct the discipline.

‘The division of labor works perfectly, but the division of responsibility doesn’t work.’ Sedláček says the field of economics is more closely tied to philosophy than the advanced mathematical constructs of today’s fiscal experts. Too many people, he argues, have accepted the “growth at all costs” mantra championed by capitalistic economic theory. In fact, his book is an effort to return the field, in some form, to the common man.

The response to Sedláček’s book, meanwhile, has also been divided. Some have criticized it as little more than a moralizing work of pop economics. Others praise as it as a thought-provoking work that makes the economy accessible to the average person, while challenging the underpinnings of the field as a whole. It was recently listed in The Washington Post’s top five economics must-reads.

For Sedláček, who served as an adviser to former Czech President Václav Havel, the book is about exposing the true nature of finance. “Economics is nothing else than a value system in disguise,” he says. “It has been a huge pretense and a mistake if we believed that economics, or the economy, is value-free. In fact, it is absolutely value-laden, and there is nothing about the economy that is actually really value-free — every single business decision, every single consumer decision, is a moral decision.”

‘Save When Times Are Good’

‘The heart and core of this crisis is in this fervent belief that we need to consume and the only thing that’s going to help us out is consumption.’“And of course Joseph gives him the interpretation of the dream and tells him what to do. And the advice was, you know, during the good years, do not eat everything that grows but store crops, so that you have energy to use during the bad years,” Sedláček continues. “So to translate that into today’s language, during the years of growth, produce budget surpluses — which is something that we almost forgot to put together, the budget-surplus story — and, if you are able to run budget surpluses during the good years, then in bad years you can run deficits. And you will not die of hunger.”

He concludes: “This is why the financial crisis is such a huge moral problem. Because we know, everybody knows, there’s something rotten.”

Sedláček openly advocates a new, independent regulatory unit that would order surpluses of a set percentage in economically strong years and control the amount of debt countries can go into in the “lean” years. This is a central component of his book. ‘The problem is not monetary. It is not a problem of the euro. It is, principally, a problem with debt.’

He says the debate over the debt-plagued euro, while important, distracts from the real issue at hand. “The problem is not monetary. It is not a problem of the euro. It is, principally, a problem with debt. And we need to address debt. We don’t need to be addressing euro issues right now — that is a secondary kind of an effect of the crisis — but really the heart and core of this crisis is in this fervent belief that we need to consume and the only thing that’s going to help us out is consumption.”

Sedláček believes the pharaoh’s decision to store up goods was a “much wiser” economic policy than what’s in place today, despite “all the modern science and Ph.D.s from all the Ivy League universities.”

With Europe mulling fresh bailouts for indebted countries and the United States facing another possible recession, it can seem like the West is in need of an economic miracle. Perhaps, in a way, the Bible is a good place to start.