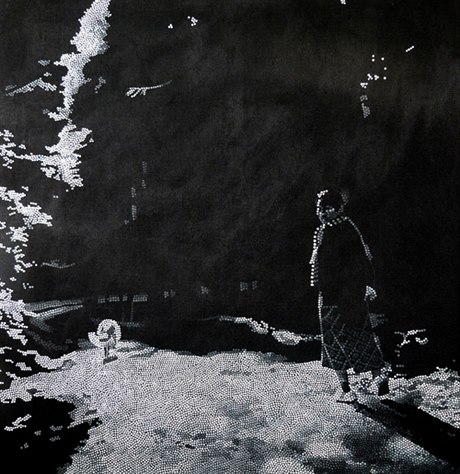 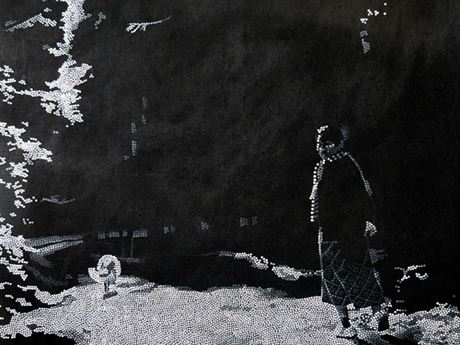 The exhibition of paintings by Eva Sakuma currently on display at galerie 1. Patro shows work of seemingly paradoxical characteristics. The paintings are simultaneously very European and very Japanese; they are very quiet and peaceful in the rural Japanese subjects represented, but very busy in the technique of clustered dots of paint used to depict those scenes.

The division continues to the painter’s Czech first name and married Japanese last name as well as the division of labor in the Czech and Japanese aspects of her art. Sakuma told Czech Position that while in Japan for regular visits to her husband’s family she doesn’t paint, but instead devotes her time to exploring and taking photographs of what she sees around her in her parents-in-law’s rural village. Not having time to paint there though she stores up images as well as emotional impressions and waits to transfer them to canvas when she returns to Prague and her studio.

“I’m taking it all in while I’m in Japan and when I come back to Prague, which is such a totally different world, the distance makes me see much more clearly what I saw in Japan,” Sakuma said.

In fact, Sakuma sees more of a unity than a division between the two different cultures that make up her work. The paintings in the exhibition represent three years of work. Much of the time spent is accounted for by the painstaking technique she uses, one which is highly reminiscent of the Pointillist technique used by Georges Seurat at the end of the 19th century.

In Sakuma’s case she creates images out of circular impressions of paint applied by ends of plastic tubing, something which arose from previous work she had done with plastic tubing. The result is highly vivid and evocative pictures in which details come through surprisingly clearly.

“Of course I know Seurat and his work, but I think the reason I use a similar technique is really different. I’m not thinking about the way I paint as a technique. I’m thinking of it as a process which is very natural to me,” Sakuma said, adding that this way of painting suits the meditative subject matter as it takes a long time to do, which is typical of her work in general.

At the opposite extreme from action painting, Sakuma cherishes the time spent enrapt in each painting as its image comes into focus.

Origins of a cross-cultural connection

Sakuma sees a number of threads that led to her artistic focus on the Japanese countryside and rural life she now regularly visits.

“My husband’s parents live in an old village in an old house and I love how old black and white Japanese photos look. I can spend hours looking at them and finding small details in them like a small person walking in the corner of a landscape.”

Some of the paintings that include figures represent an even closer tie to old Japan as they were made from old photographs taken in the late 1920s. The photos were taken by Tavík František Šimon, the grandfather of the manager of galerie 1. Patro Petr Šimon, on a trip he made around the world, on which he spent a significant amount of time in Japan. “I spent a lot of time with those photos,” Sakuma said.

The old photographs and their evocation of traditional Japan is another factor that contributes to the minimalist, almost timeless appearance of her paintings.

“I feel I live more in the past Japan, the old Japan. The traditional Japanese villages now are mainly filled with old people. You rarely see families with young children. It looks like time stopped there. There are no shops there, nothing.”

As close as she feels she has come to Japanese culture, Sakuma is aware of much that remains obscure to her, and it is this obscurity that also plays a direct visual role in her work.

“I know I will never be Japanese. There are many things that are very different in behavior and ways of thinking, so when I cover my paintings with a layer of white points it is a conceptual way for me to use the layers of paint, that you can always see through it, but there is still something between you and what the painting shows.”

Sakuma says she could imagine bringing the same style of painting to subjects closer to home. “It is all about light and shadow, which you can find here as well,” she said, adding with a laugh that she has imagined the situation being reversed – that if she were Japanese and came from an old Japanese village and her husband was from Prague she might be applying this technique to paintings of Prague Castle.

As happy as she is to see three years of her work exhibited together she feels strongly that it is not the end. “I feel it’s unfinished and hopefully I’ll do some more.” Sakuma says that she can’t predict if she will continue to paint this way in the future. At the moment she is aiming to apply the technique on larger canvases, which is particularly challenging.

Ultimately though, she finds her connection to Japanese culture constantly stimulating. “I don’t think I will ever be bored going to Japan. I’m grateful if I can spend some time there.”