Most people approve of transport unions’ strike over gov’t reform pacakges, but other actions — like a blockade — are less popular 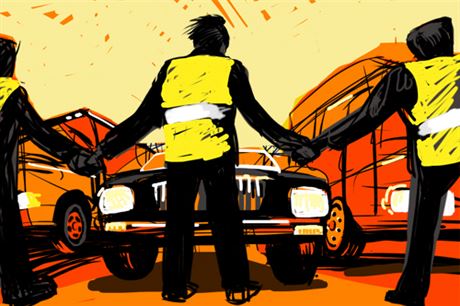 Despite the inconvenience it will cause, a majority of Czechs support a 24-hour nationwide transport strike called for Thursday to protest government reforms, according to a flash poll by the Center for Analysis and Empirical Studies (SANEP).

“The majority support of Thursday’s strike is seen as a protest against government reforms rather than as an expression of dissatisfaction with the political environment dominated by corruption scandals, the coalition disputes and unfulfilled promises from political parties,” SANEP said.

A majority of people also disagreed with the court injunction that stopped the transit strike from taking place on Monday due to organizers giving insufficient notice. In total, 56.6 percent disagreed with the temporary strike ban while 35.1 percent were in favor of it.

Just over three-fifths of respondents also said that the reform package is leading to a radicalization of Czech society, with only 16.3 percent disagreeing. Some 60.8 percent also said that the government reform was so unbearable that it was necessary to respond by organizing strikes, and a similar number — 59.9 percent — said they would support any general strike. But less than a majority, 39.6 percent, say that blockades, strikes and other protests will be effective in resolving the country’s economic and political problems.

“It is obvious that the members of the public who are most dissatisfied with the behavior of top politicians are most likely to support any industrial action against the officials,” SANEP said. “Thursday’s strike will show to what extent the imaginary cup of public dissatisfaction ‘runneth over’ and whether an escalation of public protests against the behavior of political elites can be expected.”

While the strike itself has some support, the plan to block roads is less popular. Some 50.1 percent oppose the idea, and 44.4 percent support it. Most people — 63.3 percent — do not see a blockade of roads in Prague and Brno as well as disrupted rail traffic as a major complication. Just over a third did see it as a serious problem. Likewise, some 55.4 percent oppose the police becoming involved to prevent the blockade, and 36.1 percent favor intervention.

When asked to choose from a list of which specific actions they favored, 34.3 percent support the strike on Thursday, other protests against government reforms and all strikes in general while 15.2 percent support the strike and other actions that day, and 22.6 percent favor just the mass transit strike but not the road or railway blockade — for 72.1 percent favoring some sort of action. Some 22.1 percent do not support any protests against government reforms and 5.8 percent do not know.

The survey took place June 13–14 with 2,081 Czech respondents between the ages of 18 and 69 who answered questions both online and in person. The people were selected according to demographic modles, and the margin of error is 1.5 percent, accordign to SANEP.