The sound of silents 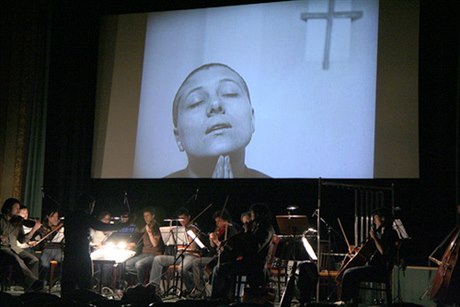 Berg Orchestra performing the new score for ‘The Passion of Joan of Arc’ at Febiofest 2010 foto: Česká pozice 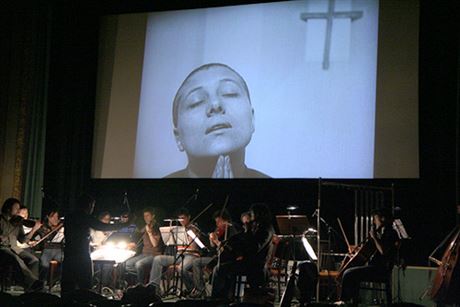 The Prague-based Berg Orchestra has long provided live accompaniment for a number of classic silent films showing in the Czech capital. This year, they are bringing one of these performances abroad on the orchestra’s summer tour of Northern Spain, where among other concerts they will accompany Carl Theodor Dreyer’s 1928 silent classic “The Passion of Joan of Arc” with a contemporary score by renowned Lithuanian composer Bronius Kutavičius.

Luckily for local audiences, the orchestra will perform the work at home as well, with a concert on Aug. 12 at St. George’s Basilica at the Prague Castle. The new score was commissioned as part of the Lithuanian capital Vilnius’ status as a City of Culture in 2009. Four months after its premiere in Vilnius the Berg Orchestra gave the piece its next performance as part of the 2010 Febiofest.

“Bronius Kutavičius came for the Prague premiere and from the very first rehearsal was very surprised how well we synced his score with the film,” Berg Orchestra managing director Eva Kesslová told Czech Position.

One of the main challenges of having a live score accompany a film is getting the timing down. Not only is it difficult to ensure that the film and music end at the same time, individual scenes should also match the music written for them. Kesslová insists that the orchestra’s artistic director Peter Vrábel relishes this challenge. Vrábel spent two weeks with the “Joan of Arc” score, working out what Kesslová describes as “a kind of dramaturgy.”

A landmark of world cinema, Dreyer’s film of the trial and execution of “Joan of Arc” is characterized by striking, experimental camerawork and a naturalist acting style that was diametrically opposed to the expressive gestures typical of the era’s actors. In 2010, the film was selected as the most influential film of all time by the curators of the Toronto Film Festival.

Kesslová describes Kutavičius’ score as minimalist, though not in the sense many people have of this style of contemporary music. “He is different than Phillip Glass. There are Lithuanian folk roots and the music is very dense and colorful. It’s not at all repetitive. It’s minimalism, but richer,” Kesslová said.

Kutavičius is considered one of the chief innovators on the Lithuanian music scene. His 1970 “Pantheistic Oratorio” is seen as a jumping off point for contemporary Lithuanian music.

Return of the Soviet avant-garde

In October, the Berg Orchestra will be adding accompaniment to another silent classic, though in this case they will be playing the film’s original score. “New Babylon” (1929) was the last fully silent film made by the celebrated directors Grigori Kozintsev and Leonid Trauberg.

Co-founders of the film and theater group Factory of the Eccentric Actor, in 1921 the two directors survived the Stalinist terror and went on to have long and distinguished careers. Through his later screen adaptations of “Don Quixote” (1957), “Hamlet” (1964) and “King Lear” (1971), Kozintsev became one of Russia’s most celebrated directors.

“New Babylon” is an epic tale set during the Paris Commune and is generally considered to represent the peak of the avant-garde Soviet silent age, with expressionist techniques utilized to create vampiric capitalists and stunning, montage-filled battle scenes. Today, though, it is the film’s score — composed by a young Dmitri Shostakovitch — that is the most remarked feature of the film.

The Berg concert will also include the world premiere of Czech composer Jan Dušek’s score to accompany a 1910 silent short by D.W. Griffith called “Child of the Ghetto.”