The rise and fall of Prague’s Radio Autumn

The Radio Autumn festival had four European radio orchestras when it debuted in 2009 — and grand ambitions. What happened? 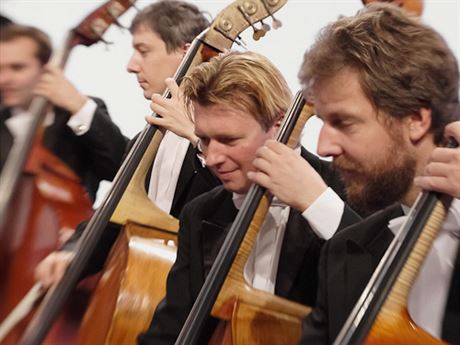 The Frankfurt Radio Symphony Orchestra is noted for its broad repertoire and recordings of Bruckner and Mahler symphonies | foto: © Tim Wegner, Česká pozice

When it started in 2009, the Radio Autumn festival had a promising lineup of four European radio orchestras and mighty ambitions. It was going to replace Prague Autumn as the fall counterpart to Prague Spring, bringing a full slate of radio-sponsored ensembles – not just symphony orchestras, but choirs, traditional folk groups and jazz big bands – to Prague for performances and broadcasts throughout the European Broadcasting Union (EBU).

A quick glance at this year's schedule shows some movement, but in reverse. There are only two radio orchestras (Prague and Frankfurt) on a six-concert program that is more a patchwork than a festival, with a new contemporary music project and a benefit concert stapled onto a modest symphony concert core.

“We are not proud of this program – at all,” admits Jakub Čížek, Head of International Relations at Czech Radio (Český Rozhlas). “We wanted to continue the tradition of Prague Autumn, but we have been limited from several points.”

After the Prague Autumn festival sank under the weight of mismanagement in 2008, Radio Autumn organizers hoped to fill the gap in the city's cultural calendar by picking up Prague Autumn's principal sponsor, Zentiva. But in 2009 Zentiva became part of the Sanofi group, and stopped sponsoring cultural events.

Meanwhile, the Dvořák's Prague festival muscled onto the fall scene with major sponsors, large grants from the city and state, and blockbuster programming. As a result, the initial enthusiasm for Radio Autumn faded.

“The original idea was to present radio ensembles of very high quality that don't often tour, because they're busy recording and playing concerts in their own cities and regions,” explains Čížek. “But you can't do that without a long-term major sponsor, so you can plan programs two or three years in advance. And we've never been able to get one. So every year, we decide at the last minute whether to do the festival with a very limited budget.”

A small, dedicated group at Czech Radio has kept Radio Autumn alive, and given the constraints they work under, done a commendable job. Though it's not what was originally envisioned, this year's schedule includes some tasty offerings.

The centerpiece is two concerts by the Hessischer Rundfunk Sinfonieorchester, better-known outside Germany as the Frankfurt Radio Symphony Orchestra. Currently led by Estonian conductor Paavo Järvi, the orchestra is noted for its broad repertoire and recordings of Bruckner and Mahler symphonies.

An entire evening will be devoted to Bruckner's “Symphony No. 8” (Oct. 8). The following night, the orchestra will play Weber, Mozart and Schubert, with Georgian pianist Khatia Buniatishvili soloing on Mozart's “Piano concerto No. 23 in A major.”

The festival also gives Czech Radio a chance to maintain an audience favorite, a concert featuring the winners of Concertino Praga, an annual competition that the station sponsors for musicians 18 and younger. This year, the Pilsen Philharmonic and conductor Tomáš Brauner were recruited to provide accompaniment for the 2011 laureates: violinist Jan Mráček, who will play a Mozart concerto; flutist Veronika Blachuta, who will play a Stamitz concerto; and trumpeter Walter Hofbauer, who will play a Hummel concerto. The program will open with the orchestra performing Haydn's Symphony No. 6 (Oct. 17).

“The concert gives these young players a chance to perform on a big stage with a full orchestra,” Čížek says. “It's always been quite popular, and judging by ticket sales, it will be again this year, too.” A chamber concert at a chateau in Hluboká (Oct. 18) is part of an exchange program that Czech Radio runs with Slovenský Rozhlas, its counterpart in Slovakia. Every year, the stations sponsor a “castle concert” in each other's country. This one features the Bratislava Clarinet Quartet; no program has been announced.

Bookending the festival are two add-ons. It opens with Babel Prague, a new festival of “sound and improvisation adventures” – which is to say, brain-bending modern music. There are two promising mainstays on opening night (Oct. 4): Pendulum Music, an early electronic work by American composer Steve Reich, and a solo performance by Pauline Oliveros, a longtime fixture on the American avant-garde scene who plugs her accordion into a laptop and creates improvisational soundscapes.

“The organizers approached us with this project, which fits into a genre we have at the station for new works called ‘Ars Acustica,’” Čížek says. “We will broadcast the opening night performance live via satellite on the EBU. I don't know how many stations will pick it up. But our intention was always to present a wide spectrum of music, so it's good for the festival.”

The closing concert (Nov. 1) is a benefit performance by the Prague Radio Symphony Orchestra for Smile for Life, a B. Braun-supported charity that sponsors cheerful entertainment for children in hospitals.

Pianist Jan Simon will join conductor Petr Vronský for a Saint-Saëns concerto. The other pieces on the program might have been lifted from the recently concluded Dvořák's Prague festival: Dvořák's “Slavonic Dances Nos. 9 & 10,” and his Symphony No. 9 “From the New World.”

“It's Braun's project,” says Čížek. “But this is the kind of programming that Prague audiences like, so it's a good fit.” If Radio Autumn falls short of inventive programming, it has nonetheless managed to maintain two of its original goals. “We wanted to support young musicians and special projects, and record and broadcast the concerts, and we're doing that this year,” Čížek says. But the dream of bringing Europe's best radio ensembles to Prague has been deferred – perhaps permanently.

“The last thing that private companies are thinking about now is supporting a radio symphony festival sponsored by a company already getting public money,” Čížek says. “I'm not crying or complaining – that's just the way it is. But the basic idea is good, and we still hope to find a general sponsor someday.”