The Golem does New York

As part of its 50th anniversary season, NYC’s La MaMa theater is reprising a marionette performance of Prague legend ‘The Golem’ 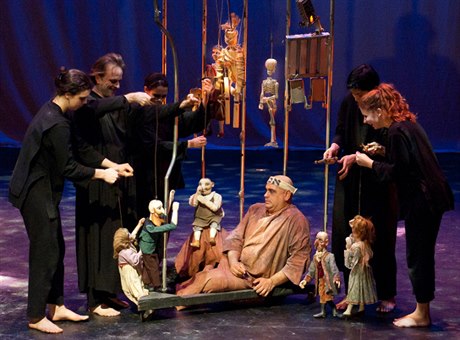 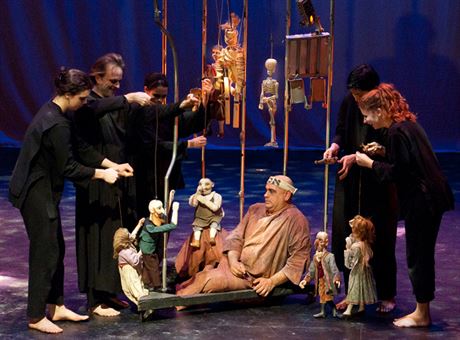 The story of the mythical creation of Rabbi Loew was written and directed by the artistic director of the Czechoslovak-American Marionette Theatre (CAMT) Vít Hořejš. The dance-theater performance was originally developed in 1996 at a contemporary dance festival in Bytom, Poland and premiered at New York’s La MaMa theater in 1997.

Hořejš told Czech Position that “The Golem” being performed in New York through Dec. 4, however, is a much different version than the original.

“We added a narrator and totally reworked the choreography,” Hořejš said, adding that one feature that remained the same was the music by Grammy-award winning composer Frank London of The Klezmatics.

Vít Hořejš came to New York from Prague in 1979. Throughout the ’80s he toured with Ta Fantastika Black Light Theatre and in 1984 found a stock of antique Czech marionettes in an attic at the Jan Hus Church in Manhattan. In 1990 he founded CAMT with fellow Prague émigrés and began bringing the classic marionette theater to New York audiences.

“We started with the Czech themes. We started with ‘Faust,’ which is the biggest hit of the traditional marionette theater and went on to other plays based on Czech fairy tales and then graduated to the international repertoire,” Hořejš said.

A story from Prague

One difference between Czech and American audiences is that the stories the puppet shows are based on are not as familiar to the latter — and in performances generally consisting only of music and dance, it can be difficult to pick up the threads of the story.

“In New York you don’t get that many people who know the story of the Golem very well. I’d estimate about one third don’t know the details, another third will take it as a dance with marionettes while there is a third that wants to know the story, which is why we have the narrator.”

The Golem derives from ancient Jewish folklore and is best-known as a monstrous creation of the 16th century Prague Rabbi Loew, brought to life from inanimate clay to protect the city’s Jews from attack before going out of control and having to be stopped himself. According to legend, the Golem still lies dormant in the attic of the Old New Synagogue.

The figure of the Golem has received many incarnations in books and film, most famously in the novel of longtime Prague resident Gustav Meyrink as well as the silent film classic by German director Paul Wegener. While the film Golem looks like a robot the CMAT production holds more closely to the original notion of a giant clay figure by having a costumed actor tower over a 48-inch puppet of Rabbi Loew.

While Hořejš says that every production has its own specific obstacles to overcome, presenting Czech works to international audiences do not always come up against cultural barriers. When CMAT put on “Rusalka, The Little Rivermaid” based on the opera by Antonín Dvořák — in what Hořejš considers was the company’s biggest challenge —the result was a resounding success.

“I was surprised how people responded. We used three arias from the opera, in Czech, along with Jazz and Rock. There was no narration or dialogue, but it was well understood, and even by children.”

The company is based in New York but has taken its marionette theater far and wide to perform – from Gettysburg, Pennsylvania to Pakistan, as well as performing back in the Czech Republic. Hořejš is currently preparing to take productions of “Winter Tales” and “The Snow Maiden” to Los Angeles for a month of performances.

CMAT does not only draw from Czech fairy tales for its performances but recently staged an adaptation of Ladislav Fuks’ chilling 1942 novel of Nazi occupied Prague called Mr. Theodore Mundstock along with a play titled “Mr. M.” It is the story of a Jewish inhabitant of Prague preparing himself for deportation to the concentration camps to the point of self-torture as he tries to approximate at home the conditions he expects to find.

The company has also delved into modern American history with the critically-acclaimed “The Very Sad Story of Ethel & Julius,” which tells the story of the conviction and execution for treason of American Communists Julius and Ethel Rosenberg — in a production using teddy bears. In “The Life and Times of Lee Harvey Oswald,” puppets are used to examine whether in fact Oswald did not in fact act alone and out of misplaced patriotism in shooting JFK, without any larger conspiracy behind him.

Other CMAT productions have included Shakespeare’s “Hamlet” and “Twelfth Night” as well as an adaptation of the memoir of Russian-born artist and East Village 60s counterculture icon Yuri Kapralov in “Once There Was A Village.”