The (Czech) creature from the black lagoon 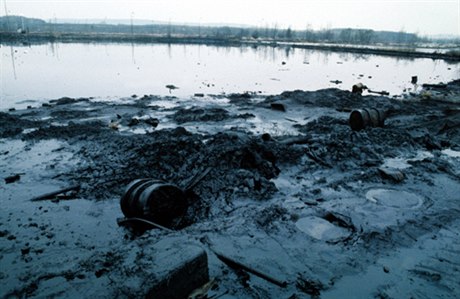 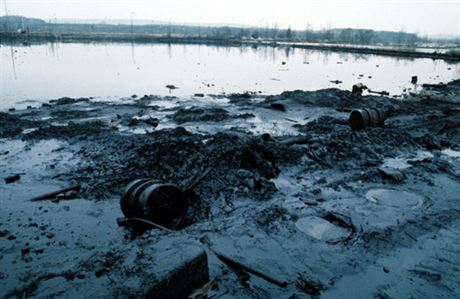 The dispute that has flared up around among the foulest of Czech hazardous waste sites, the waste dump known as the Ostramo lagoon, should serve as a warning ahead of plans for the giant eco-tender, championed by Finance Minister Miroslav Kalousek (TOP 09).

In both cases, the idea is for a consortium of companies to resolve major environmental problems. The effort at the oily black lagoon near Ostrava, led by the Geosan Group, has been a distinct failure. How does this bode for the eco-tender — launched by the Finance Ministry in December 2008 to clean all major toxic sites in the Czech Republic, with the stated aim of accelerating the process — which could cost taxpayers a cool Kč 115 billion? Geosan Group is among the favorites in the proposed effort to cleans the mostly heavy-industry sites dating back to the Communist period.

After more than a decade of waiting for the Czech government to fund and set rules for the clean-up of chemical waste from Ostrava’s industrial pools, or the so-called “oil lagoons,” in 2003 the city finally received the long hoped-for news that the process could begin. As the business daily Hospodářské noviny (HN) reported on Friday, the Clean Ostrava Association (SČO), which in 2004 won a tender to clean up the lagoons, has not paid its contractors for their work. One of them, Baltom, is therefore threatening to sue the SČO leadership, i.e. Geosan Group.

HN also reported that the final price of Kč 2.6 billion for the Ostrama project is anything but final. Geosan Group has wheedled another half billion out of the Czech state and yet still contractors remain unpaid. At the same time, the eco-tender hopeful is collecting money from the state via Diamo, the state-owned uranium mining company. Meanwhile, there is no visible improvement at the Ostramo lagoon after nearly Kč 1 billion in investment.

In fact, the clean-up has not gone according to plan in any way — the timetable has also been pushed back, as previous contractors had done for various reasons literally hundreds of times in the past. The SČO was obliged to clean the location by 2015, but the date has been postponed to 2018. Anyone who believes the official version of events ought not to venture into the forest, as they could be as easily deceived by the Big Bad Wolf as was Little Red Riding Hood herself. The story of the privatization of Ostrama, long since bankrupt, is about as murky as the black lagoon itself.

The story of the privatization of Ostrama, long since bankrupt, is about as murky as the black lagoon itself, where an estimated 200,000 tonnes of waste remain. The size of the project and the amount earmarked to clean it up make it the biggest environmental contract in the Czech Republic. What better test case for Geosan Group’s suitability as a candidate in the eco-tender?

Meanwhile, Baltom, of which the Danish firm Inreco is a co-owner, is not saying whether it will enter into arbitration only against Geosan Group or if it will also go after the Czech state. In any case, Baltom, which is no longer is working on the lagoon, has been replaced in its capacity as a supplier by the firm Šamonil.

Baltom, however, has an industrial patent on some unique technology. So could the firm after withdrawing from the lagoon still benefit or not? Its recycled fuel is usable in electric power stations and in cement works — in theory. But in practice, no one is particularly interested in it. For that matter, Baltom has had its own problems, with its “product” improperly stored, leading to a visit by the Czech Environmental Inspectorate (ČIŽP) and the handing down of penalties (yet to enter into force), which it appealed on the grounds that it wasn’t paid for the work. Meanwhile, Diamo is satisfied because the terms of its contract were met.

What to take away from all this? Note that Geosan Group won the bid despite having quoted the second-highest price for its work. Having secured the job, it clamored for more money, and is heavy-handedly pushing for more time to get it done. At the sprawling Spolana chemical plant, the company has thus far failed to clean up the SAE building, which is contaminated with mercury and dioxins.

‘Mother of all tenders’

The three companies that made it past the first round of earlier version of the eco-tender — a nationwide environmental cleanup that could potentially be the largest tender in Czech history — are Geosan Group, a Czech general building contractor that has a small environmental division; Marius Pedersen Engineering (part of Veolia Environment); and Environmental Services, owned by Czech-Slovak equity group J&T.

In the first round, the Finance Ministry eliminated three companies, including PPF Advisory, connected to the group of companies controlled by Czech billionaire Petr Kellner. PPF Advisory filed a complaint over its exclusion with the Office for the Protection for Competition (ÚOHS) over its exclusion but later withdrew from the process.

Of the eco-tender finalists, “the most mysterious of all is Geosan Group,” the business daily Hospodářské noviny (HN) wrote at the time, noting that two companies with “unknown shareholders” took stakes in the group in 2008 — the same year the controversial tender was called. Cyprus-registered Duplessa Investment Limited now owns a 49.9 percent stake in the company and UK-registered firm Britten Developments Ltd. a 14.7 percent stake, reported, with the remaining 35.4 percent in the hands of Luděk Kostka, the Geosan Group board chairman and CEO.