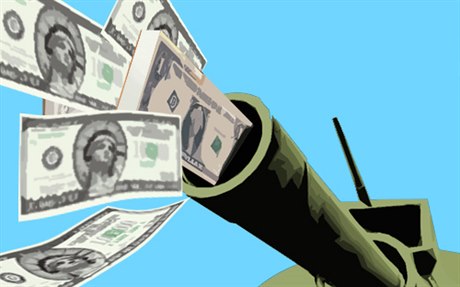 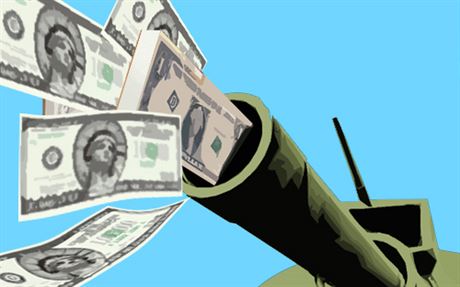 Governments spend astronomical sums on waging war but rarely are the expenses subject to precise analysis. The reason is simple: As stated by Joseph E. Stiglitz and Linda J. Bilmes in their essay Estimating the Costs of War: Methodological Issues, with Applications to Iraq and Afghanistan, the priority of war is to win. Nevertheless, economy has played a greater role in the in Iraq and Afghanistan than in previous conflicts.

As many say, the prime motivation for invading Iraq was the desire to control the county’s oil resources. But the Iraq war is a first in other areas: It was the first operation in US history completely financed with borrowed money, and no other military operation has been so heavily dependent on suppliers from the private sector, including for the most crucial of aspects — security.

Stiglitz and Bilmes attempted to calculate the cost of the Iraq and Afghan wars, and published their findings in the book “Three Trillion Dollar War: The True Cost of the Iraq Conflict.” The authors say the reason why previous estimations of the cost of the military interventions were too low was that it was kept secret that the military was keeping 100,000 and more likely 200,000 professional soldiers for five-year service periods. As noted by Republican Senator John McCain, even during his second election campaign George W. Bush did not make any commitment to tackle the long-term consequences of the invasions of Afghanistan and Iraq.

Not cynical to calculate

Economic analysis is based upon expenses and revenues; for our readers it could be interesting to focus on the perceived returns which from the central European perspective are based on cynical factors. For example, it has been demonstrated that achieving A condition of the democratic process is to inform citizens who, according to Stiglitz and Bilmes, should at least have a rough idea about the costs of war.    “territorial security” does not result in improved security per se: threats simply shift to a different place. The conclusion to be drawn here is that it’s necessary to approach security with a global perspective.

In “traditional” wars, estimations of the enemy’s fixed capacity — the balance between the number of soldiers killed or injured, and the ratio of forces on the battlefield — plays a crucial role in military planning. But such calculations are useless when the majority of enemy forces are volunteers supported by the local population.

It’s also worth attempting to analyze cost effectiveness. After investing $50 billion into the reconstruction in Iraq, funds were diverted to support the civilian population as part of the anti-insurgency strategy.

Stiglitz and Bilmes admit that there are many problems in attempting to assess the costs and returns of the two wars: Many of the invoices are for non-marketed goods and services, and many factors remain hypothetical. If there had been no invasion of Iraq would oil prices have risen so sharply? Would the federal deficit be so high? Would such a deep economic crisis have occurred?

In their conclusion the authors express hope that analysis of the war costs by the Congress budget committee would become routine: the wars are having deep social repercussions, from the financial costs to the alarming number of suicides by veterans. While estimations of cost cannot include all expenses and returns, a general idea about the size thereof is beneficial. And finally, a condition of the democratic process is to inform citizens who, according to Stiglitz and Bilmes, should at least have a rough idea about the costs of war.

Between May 2010 and February 2011, the Supreme Audit Office (NKÚ) conducted a review of six major procurement deals by the Czech military between 2005 and 2009, the findings of which are presented in the 10/10 report which was endorsed by the NKÚ at The ARTHUR radars have not been used since they were bought in 2004. the beginning of May 2011. Although the subject matter and aim of the report are far more modest than Steglitz’s and Bilmes’ studies, it is certainly does not make pleasurable reading. In the review the NKÚ analyzed six acquisitions by the military which cost total of around Kč 18.2 billion of tax payers’ money.

One of the acquisitions scrutinized was that of 976 medium-sized all-terrain vehicles. Originally, however, the military intended to purchase 2,485 of the vehicles and claimed the quantity was “a justified necessity.” The purchase of the ARTHUR mobile radar stations was included in the military’s acquisition strategy on the grounds that it was necessary for full participation of Czech artillery battalions in operations in non-NATO member states. But the ATHUR radars have not been used since they were bought in 2004.

The need for high-capacity transportation planes to replace the military’s Soviet Tupolev 154Ms and Antonov An-26s was included in the defense ministry’s acquisition strategy, but neither the Airbus-319CJ nor the Spanish CASA C-295M which the ministry bought to fulfill this requirement fall into that category — they are medium capacity transporters — and their flight range does meet the military’s stated minimum of 5,000 kilometers without refueling. In this case, the Ministry of Defense also ignored the timetable for the renewal of the Czech Air Force’s fleet and announced that the L-159 were not required and proposed exchanging 12 of these planes for four CASA C-295Ms in a barter deal.

During negotiations, however, the conditions changed radically and the MoD agreed to swap five L-159s for one CASA.

The price paid for the three other CASAs was over Kč 3.5 billion including VAT. The Chief of Staff of the Czech armed forces warned prior to the signing of the part barter, part swap contract that due to the limited range of the CASA planes and their relatively small capacity, the deal would be disadvantageous, but the MoD went ahead with the deal regardless.

The total cost of acquiring the four CASA planes, including service support, reached almost Kč 4.8 billion including VAT. But this figure does not include the five L-159, acquired by the military towards the end of 2008, which were exchanged as part of the deal: it only includes the cost of adapting two of the L-159s from one-seater to two-seater capacity.

What is more, in its program 107,310 – Raising the Capabilities of the Air Force, in which the CASA deal was included, the MoD managed to circumvent the government’s military spending cap. Also, part of the expenses for service support reaching almost Kč 1 billion including VAT is being covered from other sources, despite the fact that this support was included in the delivery documentation and was included in the supplier’s original offer.

The NKÚ’s 10/10 audit doesn’t tell us how much Czech military involvement in the Iraq and Afghan wars has cost the Czech budget. Nevertheless, it clearly shows that it has cost more than it should have.