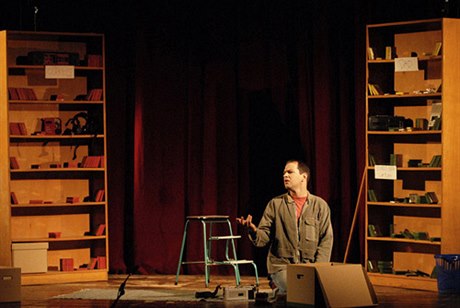 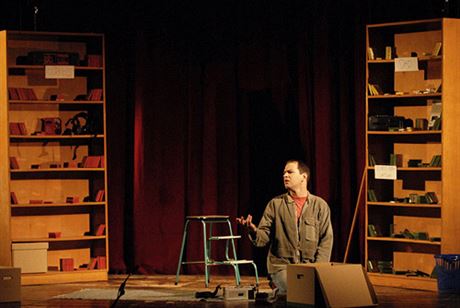 An 11-year old boy stands alone before the audience except for his tape recorder and collection of cassettes. He talks about the unraveling of his family at the hands of his father, a frustrated writer and inveterate womanizer, who in spite of everything he cannot help hero worshipping.

This description recounts the basics of the one man show “My First Sony,” playing nightly (except June 2) at 8:30 p.m. as part of this year’s Prague Fringe Festival, except that Yotam, the 11-year old boy, is actually experienced Israeli actor and director Roy Horovitz. On June 2 it is at 4 p.m. due to the actors other commitment.

“I’ve been doing it for 15 years now,” Horovitz told Czech Position, adding that though there are times it is more stimulating than others he still likes it. “It’s still challenging. It still moves me very much.”

The same could be said for the audience, who hear the voices of an Israeli family in turmoil. Place the words Israel and turmoil together and many people will instantly make political associations, but the politics in this play are strictly familial and psychological, though no less scarring for that. From the oversensitive son clinging to his tape recorder, to the tough but still vulnerable Argentine-born mother, to the “other woman,” to the Holocaust survivor hiring the boy’s father to ghostwrite his memoirs, Horovitz maintains a flow of entertaining and often gut wrenching monologue out of which a virtual epic takes place within the spare stage set.

“My First Sony” was adapted from a novel of the same title by Israeli writer Benny Barabash. It has since been performed throughout Israel, the US, Canada and Europe and even had an Israeli TV series based on it. In the TV series, the tape recorder was replaced/updated with a video camera and Horovitz was not able to take his stage role to the small screen as they quite understandably cast a young boy to play the 11-year-old character.

While the original novel covered a much wider panorama, including the grandparents and making it a real family saga, Horovitz says that he, the director Dafna Widenfeld-Nagler and Barabash, who adapted his novel, narrowed the focus to Yotam’s immediate family. “There were thoughts about adapting it to a full play with many actors, but it didn’t work out,” Horovitz said.

On the national stage

Horovitz will also be a part of a three-actor team putting on “The Timekeepers” at the National Theater. Although strikingly different in some respects to his one-man show, the play also combines comedy with ultimately tragic material to produce emotionally powerful drama.

Written by American playwright Dan Clancy, “The Timekeepers” tells the story of a conservative Jewish watchmaker and a gay hustler at a German concentration camp. When the brutal camp capo pushes Horovitz as the pink-triangle emblazoned Hans on the watchmaker as his new assistant an unlikely friendship forms.

The Israeli production of the play has achieved immense success both at home and abroad, having been performed in the US, UK, Germany and South Africa among other countries. The National Theater will host two performances of the play on Thursday, June 2 at 6 p.m. and 8 p.m.