Strike! Why the unions are mobilizing on Dec. 8 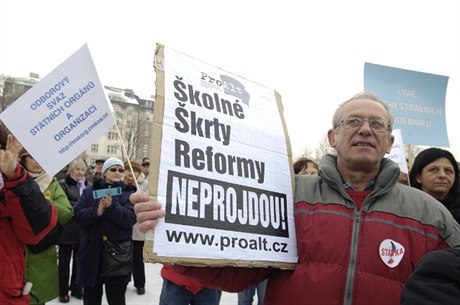 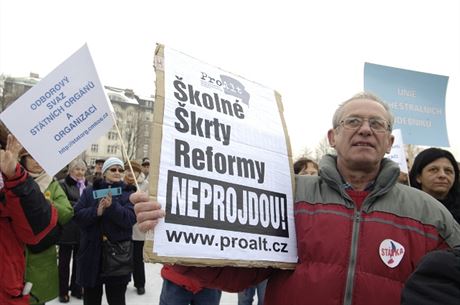 Trade unions are threatening to hold a general strike on Dec. 8 that promises to be the largest protest in the Czech Republic since 1989. Why are the unions taking such action and what will be the consequences?

Since the downfall of the Communist regime in 1989 until this year, the Czech Republic has witnessed only one general strike organized by the trade unions: In February 1997 railway services came to a halt for several days with significant economic and also political consequences.

Following the protest of 40,000 public sector employees earlier in the year, the country is now bracing for the Dec. 8 action. This raises the question: why now? Why, for example, didn’t the unions organize a nationwide strike when the package of austerity measures put forth by the government of Mirek Topolánek (Civic Democrats, ODS) was passed? And why didn’t the unions act when Topolánek demonstratively left the tripartite initiative council, comprised of government members, businessmen and union leaders, and insulted the union bosses?

The answer surely lies in the current government’s approach to negotiating with opponents — or lack thereof. While Topolánek was vulgar in parliament and made rude comments about his opponents, Prime Minister Petr Nečas (ODS) simply ignores his adversaries; he doesn’t feel the need to negotiate with the opposition or even address their objections.The approach of PM Petr Nečas causes frustration and offense and rules out any debate. And this results in demonstrations and strikes.

His approach to the unions is the same. For Nečas, tripartite meetings serve a single purpose: to announce that he is negotiating with the unions while in reality there is no genuine discussion. The unions put forward their proposals, but no one attempts to look for a compromise; Nečas and his ministers simply declare that they insist on their positions.

Such an approach causes frustration and offense and rules out any debate. And this results in demonstrations and strikes. The principal reason for the Dec. 8 strike is not the spending cuts, but the government’s complete contempt for social partners.

The consequences of the strike are easy to predict. The economic damage will be significant, but far more damaging is the threat to social conciliation. Over the past 20 years, this country has not experienced manifest friction between social groups, but it now appears that Nečas is placing his political carrier on the line by betting on a change in public sentiment: The more the public fosters hatred toward state employees - the better.

The more provocations such as the controversial “convince granny” pre-election campaign spot (which urged young Czechs to withhold visits to their grandparents unless the old folks agreed not to vote for leftist parties — and which stereotyped left-wing voters as grumpy pensioners and country bumpkins), the more tensions there are within society — all the better for this government.

This policy will work only until one of the governing coalition parties realizes that this approach cannot be applied indefinitely. And such a moment is approaching. Apparently, we can expect some major developments in domestic politics before Christmas. For the sake of my fellow countrymen, I hope as much.

Note: The author of this article is a prominent Czech decision maker who has asked to remain anonymous. Czech Position guarantees his authenticity.

On Wednesday, Dec. 8, teachers and education sector employees, hospital doctors, police, firemen, civil servants, agricultural workers, miners, actors, classical musicians and singers, and librarians plan to demonstrate against the government’s planned spending cuts, and moreover the method with which they are to be implemented.

In Prague, the demonstration is due to begin on Palacké náměstí at 12:05. Simultaneous demonstrations will begin on Masarykovo náměstí in Plzeň, in front of the regional administration building in Olomouc; by the main hospital in Liberec; and in other regional centers.