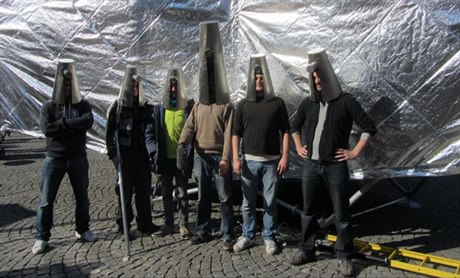 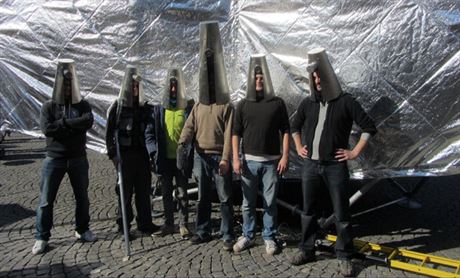 If you have walked past Prague’s náměstí Republiky recently, you could be forgiven thinking that aliens from outer space have landed. The shiny silver object with various gadgets sticking out on top is actually an audiovisual installation called Acuo. The name comes from Latin, meaning to sharpen voice.

Passersby can enter the foil-covered stellar shape and experience the outside world in a new way. “There are six microphones and one sound periscope,” project author and leader Michal Šeba told Czech Position. “I was thinking that people have a lot of sounds around them. You know all the sounds,” he said, citing some typical sounds in the metro.“You remember them but you don’t pay attention. This installation is telling people: Come in and listen to all the sounds the city makes.”

But art, as some people define it, is not just replicating reality but interpreting it. “We are also altering the sounds. … The sounds are actually music,” said Šeba, who is also a photographer. The incoming street noise is filtered to blend it into an ambient stream that is slightly amplified yet a bit indistinct. A rotatable sound periscope lets people search the area to try to identify specific sources.

The audio system was designed by Šeba along with Stanislav Abrahám. Both also operate the music label Data-live, which made music for the videomapping project at the Old Town Square clock tower.

Sound is just one aspect of the Acuo project. “We also have three cameras outside, and they see the city like the microphones hear it … and change it into a cool style though 3,500 LEDs,” he said. That is a very low number. The average pocket camera makes a picture with 12 million pixels. “It is not high resolution. It is art,” Šeba said.

© YouTube Inside the Acuo (refresh your browser if not visible)

Each LED makes a small, discrete star of light on the interior wall. “The artist who made it is Michal Pustějovský. He has worked with LED systems for a long time. …You can see if a car passes by or a person passes by. You can see everyone and everything, but not like on a TV,” he added. The inside has a retro science fiction look, from when computers had huge displays of flashing lights. “Everything is live, both the sound and the video.”

Join the away team

The resemblance to a spaceship is key to the concept. The module, according to the project organizers, is on a two-week mission to observe life on planet Earth. The staff — who explain the ship’s rules such as no touching the walls, no smoking, etc. — are referred to as cabin crew.

Visitors are crew members, temporarily using the module’s sensors to explore the nearby universe. Like most space exploration vehicles, Acuo is sending messages and images home. Data from náměstí Republiky will be archived on the project’s web page, www.acuo.cz.

You don’t even have to get on board to participate. Anyone with an FM radio tuned to 88.6 within a kilometer of the ship’s antenna can hear the audio stream. With any luck, you will be able to blend into the crowd and nobody will realize you are on a space mission looking for signs of intelligent life. “For me it is nicer than being inside,” Šeba said.

Architect Vítězslav Danda explained the concept behind the design. “The shape is a star polygon. It is sharp and hard on the outside,” he said. This reflects the noise and reality on the street. “Inside the sound is modulated … and the shape and the material are soft,” he said. The flat outside is covered with a metallic material, while the interior has a soft egg-carton foam covering the LEDs, gently curving around the interior corners.

The three-pointed star shape was not the first choice. “We considered a cube, but I spoke to a sound specialist who told me that a cube is not good for sound. When the shape is more complex, it is better,” Danda said. The polygon has six angles in total. Inside, each of the angles has a speaker linked to one of the roof microphones.

Designing a mock-up of an interstellar urban exploration vehicle was a new experience. “For me and my colleagues from [architectural firm] Edit Studios, it is a first. Normally we work on houses,” he said. Family homes are typical for the firm, but they are also involved in bigger projects such as converting factories.

It is a spaceship’s nature to have a bit of wanderlust. “The plan is take this module to other cities in the Czech Republic, and maybe we can travel abroad also,” Danda said. The results of further explorations will probably confirm the mission findings from Prague.

“I think the sounds will be similar: trams, screaming children, this tick-tock thing for blind people at the crossing sign. We are looking for busy places like náměstí Republiky. I think it will be the same in other cities,” he said.

The module will end its exploratory probing with a silent bang — a unique concert with Dan Bárta, Lenka Dusilová and beatboxer En.dru. The concert will make use of the module’s limited-range FM broadcasting capabilities. “On Oct. 29 there is going to be the first concert that [runs] after 10 in the evening,” Šeba said with perhaps a bit of exaggeration.

City rules make it hard to have late events. “The law says [after 10 p.m.] there has to be quiet.” Some far-flung venues do manage to get around the noise rule, but Šeba is correct that a late concert downtown, especially outdoors, is certainly a rarity.

“It is called a ‘quiet concert.’ It is very important for people who want to attend this concert that they bring radios with earphones, and they will listen to it on earphones,” he said. The spaceship’s one-kilometer broadcast radius would even allow people to sit in a nearby cafe or bar and listen.

The installation is made possible by Czech brewer Budějovický Budvar, one of the claimants to the Budweiser brand name, through a program called Budweiswer Urban Projects. Rather than BUP, the program uses the acronym BU2R. This is due to a word game.

“If you say it in Czech it is ‘Bu-dva-r,’” Šeba pointed out. Two is “dva” in Czech. Aside from a small BU2R logo on the outside, the corporate sponsorship is low key — and drinking any beverages inside the module, alcoholic or otherwise, is not allowed.

The project is also being held under the auspices of Prague Mayor Bohuslav Svoboda. All the same, it wasn’t that easy to deal with the city bureaucracy. “I had only 14 days, it was not too much,” location manager Petr Hozman told Czech Position. In the future, the spaceship plans to beam signals to its landing destination sooner. “I will need a little bit more time for next one,” Hozman said.