Czech photographer Jan Lukas took a bite out of the Big Apple; a retrospective of his work is now at Prague’s Leica Gallery 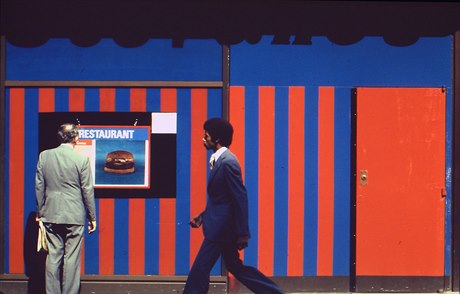 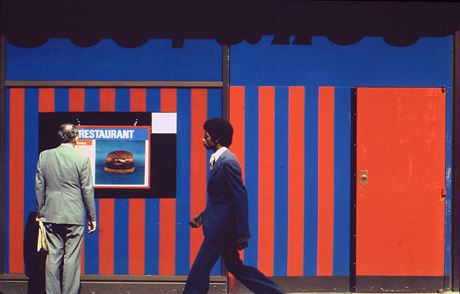 Everyone has their dream city. For Jan Lukas it was New York, and when he escaped there with his family in 1966, the city proved to be as magical as he had hoped. A selection of his photos from his time in the city is now on display at Leica Gallery.

“My father loved New York very much; even before we needed to leave,” Jan’s daughter, Helena Lukas Martemucci, who assisted in setting up the exhibition, told Czech Position. “When communism took over he wanted to leave and thought we would go to Germany. He and I visited New York in 1964, and he fell in love and decided if we could escape we would go to New York.”

Lukas, born in 1915, was a freelance photographer in Czechoslovakia mainly known for his documentary work. His love of the medium though led him to photograph nearly everything from portraits to landscapes to reportage.

He contributed to a variety of European publications and documented a number of important events in Czechoslovak history, including President Edvard Beneš at the time of the Munich Agreement; the Nazi occupation; the rise of communism and the oppression of the 50s. Many of the photographs from this time were compiled in a book, Prague Diary 1938-1965. Not published until 1995, it was this book that brought Lukas to the attention of curator Jan Mlčoch.

“Prague Diary 1938-1965 demonstrated the mood of the country, there are no drastic pictures, some are even humorous, but in a sad way,” Mlčoch told Czech Position. “But he couldn’t show at the time the pictures taken of the Nazi occupation or communist takeover.” Another book, Italian Diary 1965-1966, details the life of the Lukas family as they lived for 10 months in an Italian refugee camp after fleeing Czechoslovakia. These two books gave Mlčoch the idea to continue on the diary theme and display a small portion of Lukas’ work from New York.

“I wanted to recapture his whole life work in these diaries of sort,” he said. “What’s been done so far is a narrow compilation, he has other work that didn’t fit and that still waits to be explored.”

Mrs. Lukas said it was quite painful to narrow down the choices to show; saying the pair started with 80 photos and narrowed it down to the 35 now hanging in Leica Gallery.

“He [Mr. Mlčoch] would win on one, I would win on another,” she said. “We’d play together with the compositions, color, scenes; yes this looks good.” She adds the exhibition is divided into two parts.

“The first is New York “proper,” and these are mainly color,” she said. “The second part is black and white photos of Czech society and friends in New York who left before or after the war or in 1968.”

Mlčoch wanted to emphasize Lukas’ color work because his black and white photos are more well-known, especially locally. Mrs. Lukas says her father didn’t like working in color because he couldn’t print it himself. Much of his work is preserved on slides as that’s how photo agencies at that time requested work. Mlčoch was also insistent on showing the photos taken of Czech society in New York, saying the Czechs know these people’s names, but often not their faces, and now many of them are dead.

“After my father died five years ago, I started pulling these slides out of boxes,” Mrs. Lukas said. “The black and white ones I know so intimately, I was there or in them, they are vivid memories for me. The color ones were a surprise though, I wasn’t walking with him when they were taken so they were a discovery after the fact.”

Delight in every corner

The fact that Lukas didn’t like working in color comes as a surprise when you see how vibrant these photos are. Even ones that aren’t necessarily “colorful” seem bright and alive. Most were taken on the streets of Manhattan in the ‘70s and ‘80s and are labeled as such, with only the street or neighborhood name and the decade.

Mrs. Lukas said her father loved to walk the streets taking photos and he captured the city in a glimmering, but natural way.

He depicted everyday people and their jobs: two firefighters, looking a bit dirty, share a laugh as they stand on the back of their truck; a woman, with a big blonde bouffant, sits in a Coney Island ticket booth with a cigarette in one hand and a telephone pressed to her ear in the other. On a street in East Harlem, kids play baseball on the sidewalk; while in Central Park roller skaters are happily captured enjoying what appears to be a hot summer day.

This was life and Lukas managed to find spots of color all over a grey city. In what appears to be a garbage strewn inner courtyard of an apartment building, a beat-up car missing a door and its tires sits abandoned. The building could even be abandoned itself, some windows are boarded up, others appear missing. But as your eyes move upward, laundry is gaily strung on two clotheslines strung between the upper windows.

His black and white pictures show more intimate moments – parties and other gatherings in people’s homes. Plates of food sit on a coffee table, people are on the couch, chairs, floor, chatting; it’s a typical evening at home in the 70s. There’s one of Václav Havel in Central Park in 1968 in which he appears to be checking out the legs of the women to the side of the photo and another of him addressing the US Congress in 1990, one of the newest photos on exhibit here.

Mrs. Lukas is curious about the reaction the photos will get as his color work may be a bit of a surprise to those more familiar with his black and white photos.

“My point of view is that it is wonderful and New York deserves to be shown in color,” she said. “They are cheerful, even the ones that aren’t. They show life at its best, not luxury, but joy in most of them and that’s how my father saw New York and his life.”