Sixty years of RFE: ‘Best propaganda is the truth’

A mouthpiece for US propaganda? Or an independent voice? Prague-based Radio Free Europe celebrates 60 years of broadcasting 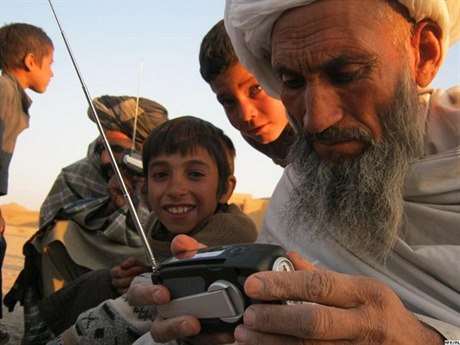 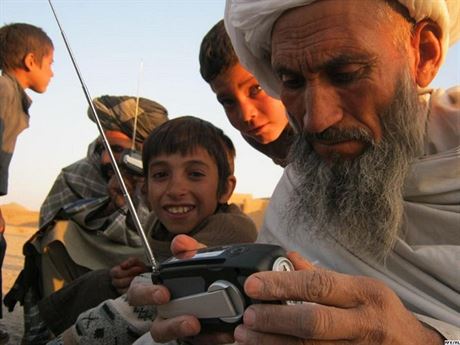 As Radio Free Europe (RFE/RL) celebrates its 60th anniversary this month, many Czechs and Slovaks will recall when the station made regular broadcasts to this part of the world during the dark days of the Cold War.

Initially established by an anti-communist organization in America, which aimed to foster the democratic tradition of free speech in Eastern Europe when communism took hold after the Second World War, RFE/RL actually made its ever first broadcast to Czechoslovakia in 1950, before beginning regular transmissions to all of the Eastern Bloc in May 1951. Under the name Radio Liberty, it subsequently started broadcasting to the Soviet Union itself in 1953.

Teams of journalists, mostly consisting of political émigrés, were assembled for each language section. With political exiles like the “father of Czechoslovak” journalism, Ferdinand Peroutka, and respected writer Pavel Tigrid involved in setting up the radio’s Czechoslovak department, the Czech and Slovak broadcasts quickly garnered a reputation for high-quality balanced reporting. Despite the fact that listening to the content of their programs was frowned upon in communist Czechoslovakia, their transmissions quickly built up an audience among the local populace.

“The main reason Radio Free Europe was so successful was because it broke through the information barrier that was erected here after 1948, when there was essentially a monothematic, monopoly of information here — of the press, radio, and so on,” says Michal Stehlík, the dean of history at Charles University, who helped organize a seminar on RFE/RL to mark the station’s anniversary.

Besides providing Czech and Slovaks at home with information that served to temper the heavily censored output of state-controlled media in this country, RFE/RL also served as a platform for many of Czechoslovakia’s exiled population, who used the station to keep alive the notion of democracy and free debate at a time of great repression.

“Radio Free Europe and its Czechoslovak broadcasts was probably the most successful initiative taken by Czechoslovak émigrés in the period after 1948,” Stehlík says. “Other political activities were effectively defunct and they did not have many other realistic alternatives to get their message across.”

This fact was not lost on the communist authorities. They did their utmost to disrupt RFE/RL’s operations and spent vast amounts of money trying to jam its signals. “The very fact that the regime strongly indicated that it didn’t want this information getting through by blocking the transmissions clearly showed that it had a big impact,” Stehlík says.

Controversial, even in the West

Despite the authorities’ best efforts, however, RFE/RL still managed to get its transmissions broadcast, which led to other attempts to try and disrupt the station at source. Many communist states sent agents to infiltrate the radio’s European headquarters in Munich, and the Czechoslovak secret service even made a notorious, but unsuccessful attempt, to poison the salt cellars in RFE/RL’s cafeteria with atropine in 1959.

As if negotiating the challenge posed by hostile communist regimes wasn’t difficult enough, the station also had to face censure in the West, where some considered it to be more of a mouthpiece for American propaganda than an independent news service.

These criticisms became particularly acute in the wake of the failed Hungarian uprising in 1956. After this popular insurrection was brutally crushed by Soviet tanks, RFE/RL was widely condemned for allegedly fanning the flames of the disastrous insurrection by falsely giving people hope of Western military assistance.

“RFE/RL was supposed to provide objective news and information,” Stehlik says. “It was not supposed to report events in an exhortative manner, which could end up harming people behind the Iron Curtain.”

Given that so many of RFE/RL’s staff were themselves exiles, it is perhaps not surprising that the station’s reporting of the events in Hungary in 1956 seemingly failed to live up to this mission

“They were very fierce, revolutionary times, and the Hungarian section was also affected by the changes that were occurring,” says Stehlík. “In a certain way, they overstepped the boundaries of objective reporting, but the station also undoubtedly became a forum for the people in Hungary.”

Even though there are still some who claim RFE/RL disastrously fomented the events in Hungary in 1956, the historical consensus seems to be that many of the charges laid against the station were unfounded.

“Looking at transcripts of the broadcasts now, historians mostly agree that although the reporting was sometimes emotional — and the lines between the professional, independent, detached journalist and people on the ground were a little bit blurred — there were no instances of incitement or provoking people to stand up to the regime,” says RFE/RL’s current deputy director of communications, Julian Knapp.

Although it was cleared of being directly responsible for events in Hungary, the controversy surrounding the country’s doomed anti-communist revolution prompted RFE/RL’s management to urge more caution in its broadcasts. The station also set up a special analysis division to ensure its reporting was professional and objective.

“I would repeatedly tell our people to remember that the best propaganda is the truth, and I think we really abided by this,” says Pavel Pecháček, the former director of RFE/RL’s Czechoslovak service.

“I told my colleagues that our information was important but that it would have to be people from Czechoslovakia who were living in the country who would change things when they felt it was the time to do so. We couldn’t order them to it.” Despite its efforts to provide a more neutral news service, RFE/RL still regularly had to endure criticism that it was merely a tool for American propaganda.

Further weight was lent to these claims when it emerged in the 1960s that the station was receiving covert funding from the CIA. The ensuing media scandal briefly threatened the existence of RFE/RL, before the matter was resolved when Congress decided to openly fund the service in 1972, an arrangement that still exists to this day.

Although lingering doubts about its objectivity remained in some quarters, RFE/RL’s efforts to provide impartial and reliable news meant it still enjoyed a high level of credibility in its broadcast regions, and this was reflected in its large listenership.

“It was our family’s evening activity almost every day,” says Czech artist Krištof Kintera, recalling his childhood in the 1970s and 80s. “It felt like an adventure because our parents always used to tell us not to say anything to anyone about what we were listening to. It was also completely different to the official media like Rudé Právo. It was like a voice from the outside, from what we considered to be the ‘right side’ of things.”

During the Cold War, RFE/RL’s credibility was enhanced by its coverage of events such as the Chernobyl nuclear disaster. For days following a reactor meltdown at the Ukrainian power plant, the radio station was one of the few media outlets that provided vital safety information at a time when Soviet state media was trying to play down the incident.

There is no doubt that the station also remained a thorn in the side of communism’s totalitarian regimes. The assassination in 1978 of Bulgarian correspondent Georgi Markov (who was notoriously killed by having his leg pricked with a poisoned umbrella tip) and a massive Ceausescu-sponsored bomb attack at RFE/RL’s Munich headquarters in 1981 only served to illustrate the lengths some communist authorities were willing to go to in order to disrupt the flow of information that RFE/RL was disseminating.

As the political climate thawed in the mid-1980s, however, it became easier for RFE/RL to get its message across, particularly when Czechoslovakia’s tottering regime relaxed its restrictions on the station’s broadcasts.

Stehlík thinks this freer flow of information may even have helped pave the way for the Velvet Revolution. “It’s hard to quantify in percentages what it fundamentally influenced,” he says. Nonetheless, one could say that at the end of the 1980s this flood of information definitely contributed to the situation that existed in society.”

When communism was finally swept away in Eastern Europe by a wave of popular protest in 1989, Radio Free Europe played a key role in keeping people in the region abreast of events as they progressed at a breathtaking pace. “I remember well how everyone was tuning into Radio Free Europe at the time,” Kintera says. “We were all coming home and listening intensely to it because we were sure something big was going to happen. In a way, the feeling was so strong that it almost helped things happen.”

Ironically, despite its efforts to provide balanced and reliable information, a mistaken bulletin by RFE/RL’s Czechoslovak service is credited with helping to precipitate the demise of the country’s communist regime.

When it wrongly reported that a young protestor called Martin Šmid had been killed during clashes with police, it inspired many ordinary Czechoslovak citizens to join subsequent student-led demonstrations, and these mass protests eventually brought down the communist government. (By a curious twist of fate, Šmid’s mother subsequently ended up working for RFE/RL’s Czech service when it moved to Prague in the 1990s).

Ultimately, although the role RFE/RL played in ensuring a free flow of information to the Eastern Bloc and helping to precipitate the collapse of communism cannot ever be fully measured, Stehlík believes its contribution cannot be overlooked.

“I would say that Radio Free Europe was a unique historical phenomenon in our country in the 20th century,” he says. “It also offers evidence that information has much greater value, power and strength than an army division.”

RFE/RL continued to broadcast in the Czech Republic until 2000, helping to play what Julian Knapp describes as “a developmental role by setting a standard for professional reporting.”

Ultimately, however, it has gradually been phasing out all its broadcasts to the countries of the former Eastern Bloc, partly because, now that they have their own established free press, the service RFE/RL provided is no longer necessary. “My interest in Radio Free Europe actually ended almost immediately after the Velvet Revolution,” Kintera says. “There was no reason for me to listen to it anymore.”

Although RFE/RL has ceased broadcasting to the Czech Republic, it still maintains a tangible link to this part of the world by virtue of the fact that it moved its main headquarters from Munich to Prague in 1995. The fact that former Czech president Václav Havel invited Radio Free Europe to move its offices to Prague is indicative of how much he appreciated the role the station played in keeping the spirit of democracy alive in this country.

From its base in Prague, RFE/RL now broadcasts to places like Russia, the North Caucasus region, Central Asia and the Balkans, where independent media outlets are banned by the government or not fully established. Although the bipolar certainties of the Cold War are long gone, RFE/RL still remains faithful to its original mission of 60 years ago by pursuing what Stehlik calls “the endeavour of free speech.”

“It continues to provide alternative information to counteract the monolith of information that prevails in certain countries where essentially there is no real free expression,” he says. “This is what has remained from the 1950s, but it is no longer so black and white. It’s a lot more layered and nuanced because the places and states where it broadcasts now are very varied. But freedom of speech is still Radio Free Europe’s legacy and its everyday reality.”