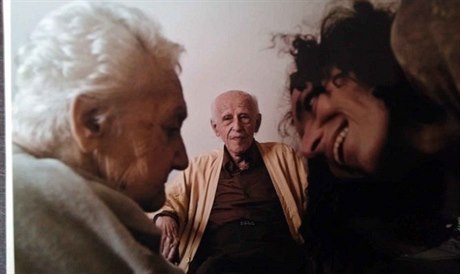 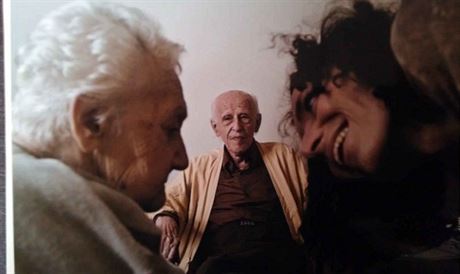 Karel Cudlín is well known as a Czech photojournalist. His black and white images of the inhabitants of Gaza or Ukraine, portraits of former President Václav Havel and other recurring subjects have graced magazine pages and gallery walls for decades. In photographing the residents of Prague’s Hagibor nursing home, though, he has brought photojournalism into contact with a more distant historical era through a stylistic leap.

Inaugurated in 2008, the Hagibor nursing home provides care to the elderly among Prague’s Jewish community. Cudlín has been taking photographs there for over two years, developing relationships and gradually getting to know the people who lived through an exceptionally traumatic episode of modern European history.

“I was fascinated by the strength of the photographs from the first moment I saw the work,” Michaela Sidenberg, curator of visual arts at the Jewish Museum in Prague, told Czech Position. “The pictures offer a glimpse into these complex and intimate environments — their lives, their inner lives.”

Sidenberg said there was a lot of material to sort through. Added to this is the fact that the variety of images at a retirement home is obviously limited by the constraints of life there, while another artistic and emotional challenge was that subjects of the pictures were generally living out their last months as they were being photographed.

“Very often it happens that there is a person that appears regularly in all the photographs over a period of, say, three to five months and then they suddenly disappear because they’ve died. So it’s a very specific work with time as well. You become very close to someone, they start opening up and telling you stories, you build a relationship and suddenly the person is gone,” Sidenberg said.

With such an imposing subject in the background as the Holocaust the photographs manage to retain a subtle, understated quality. This is all the more impressive considering the photographs are in color, with the images studiously avoiding the commercial or sentimental associations color photography often evokes.

Cudlín had never exhibited color photography before, and it took some time for him to come to terms with the idea. The initial decision to have the photos be in color started with the image of a woman in curlers in which Sidenberg saw something evocative of Old-Master portraits. The large sizes (80 x 53 cm.), heightened contrast and desaturated colors of the photographs also lend them the appearance of classical paintings and provide an appropriate depth and majesty to the life stories behind their subjects.

The understatement goes beyond the visual style to the way in which the subject of the Holocaust is neither hidden nor trumpeted to the viewers. “I think the images are so strong that they can naturally guide you through what might be behind them,” Sidenberg said.

There is one image where a concentration camp number is visible on a woman’s arm while another image of matzah on a table is the only other indication that the photographed subjects are even Jewish. Besides the powerful, unposed portraits there are images verging on abstraction that give the overall exhibition an intriguing variety.

Because of the history behind it, there could have been an abundance of information given to the viewers besides the brief introductory texts displayed on the walls, yet Sidenberg says that this was something they wanted to avoid.

“We really wanted to focus on the image not the text,” Sidenberg said. There were also legal issues involved in recounting individual stories that would have made it much more complicated to put the exhibition together.

Instead of creating a document-heavy exhibition, Sidenberg opted to include a short video (subtitled in English) in which images of dance therapy classes at Hagibor are overlaid with one man’s harrowing account of being subject to SS brutality and Soviet bombing in the last days of the war.

“When you watch the video you realize that there could be a similar or a totally different story behind each of these portraits. But this does not really matter. In a way they are all similar — all those people survived the Shoah and very often were the only surviving members of their extensive families,” Sidenberg said.

This is the first show made by the Jewish museum for its community, and Sidenberg stressed the importance of improving communication between the museum and community overall. After its Prague showing, there are plans to take the exhibition abroad, particularly within Europe, where the plight of the rapidly decreasing number of Holocaust survivors is less publicized than in North America.

“People should know that there are still more than 300,000 Holocaust survivors. Many of them live below the poverty line and they need to be helped. One way to help them is to make their presence visible. They are still among us, although it's only a matter of a decade or so until the last witness of the horrible events is gone."