Milošoski and Schwarzenberg discussed a wide range of bilateral relations, from security in the Balkans to EU enlargement 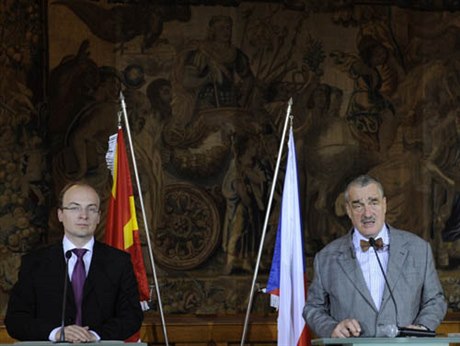 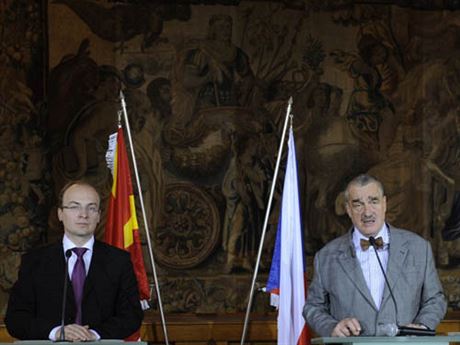 Macedonian Foreign Minister Antonio Milošoski held a meeting in Prague with Czech Foreign Minister Karel Schwarzenberg on Tuesday to discuss the countries’ bilateral relations as well as Macedonia’s future integration into NATO and the EU. The visit comes two weeks before the official visit of Macedonian President Gjorge Ivanov to Prague.

Following the meeting, Milošoski spoke at the Institute of International Relations in Prague on a range of issues, from the major challenges in the Balkans and obstacles to EU enlargement to the seemingly never-ending annoyance of the dispute with Greece over Macedonia’s name — the country became a member of the United Nations in 1993 under the provisional reference of the Former Yugoslav Republic of Macedonia (FYROM) under Greece’s insistence.

Milošoski was upbeat on the state of Czech-Macedonian relations. “It was a very good decision when we decided to open an embassy [in Prague] in 2008,” he said, citing political, cultural and linguistic sympathies as “very good capital for bilateral relations.”

The foreign minister was forthright in his message that Macedonia recognizes the reality of Kosovo’s independence although doing so produced some initial friction in its bilateral relations with Serbia. Czech President Václav Klaus, meanwhile, has refused to appoint an ambassador to the former breakaway Serbian province.

“The issue of relations between Kosovo and Serbia will continue to be an issue in the region,” Milošoski said, but he pointed out that by taking its case to international court the tension has moved from the battlefields to international institutions.

On the disputed Serbian-majority area of northern Kosovo, Milošoski also expressed an uncompromising point of view: “The perception of Macedonia is that we don’t need a ‘second Cyprus.’ Redrawing the borders is not a solution, but integrating the country into the EU so that the borders are less important is the best solution.”

While Milošoski clearly places considerable importance on the role of EU integration for the Balkans as a whole, he is well aware that the climate for continued expansion has changed considerably within Europe itself.

‘Relations between Kosovo and Serbia will continue to be an issue in the region.’

“When EU enlargement was more popular [in Europe], the region was less enthusiastic, less prepared. Today, it is different. Nearly all the countries in the region are better and better prepared, and more willing, but the idea is less popular in the EU, especially in some prominent EU states,” he said.

Milošoski is optimistic that EU enlargement will continue, considering it important not only for prospective member countries but for European peace and for “the EU to become a more relevant global player.” He insists that it is not a question of asking for special favors — EU membership has to be earned, he said — but that Macedonia is only asking “to not have the rules of the game changed once the game has started.”

One area of disappointment has been the attitude of Greece (which has a province known as Macedonia), which Milošoski thinks should take a more supportive leadership role in regard to candidate countries. In regard to the wrangling over the name of Macedonia, Milošoski said he thought there were more important issues to focus on, and that the political elite of both countries should follow the lead of their increasingly intertwined business elites.