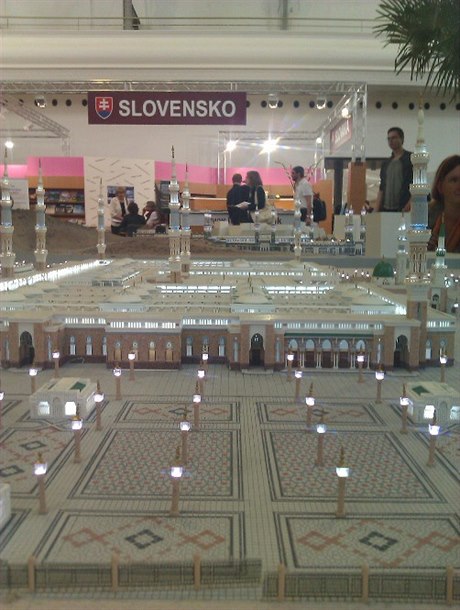 Models of the mosques at Mecca and Medina were a prominent part of the Saudi presentation at Book World Prague 2011 foto: Česká pozice 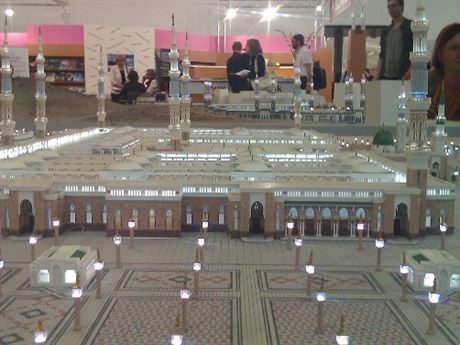 Writing from the Arab world was the focus of Book World Prague, but the “Guest of Honor,” the Kingdom of Saudi Arabia, were both at the center of the discussion and somehow absent, like a much talked about monarch invisible within his palace walls. While other countries had booths, the Saudis had a castle complete with towers, TV screens and a children’s activity area with a large photograph of camels.

In a panel on the legendary dissident publication “Index on Censorship,” founder Michael Scammell pointed to a “sinister trend” of authoritarian regimes such as China, Russia and Saudi Arabia trying to raise their cultural stock by sponsoring book fairs. After China’s barring of writers from the Frankfurt Book Fair in 2009, there are concerns about its sponsorship of the London fair next year, while Saudi Arabia has followed up its sponsorship of the 2010 Tokyo International Book Fair in Prague, before taking up the helm in South Korea in 2012.

Yet book fairs consist primarily of books and writers (along with publishers and other assorted cultural figures), and this is precisely where the Saudi presence was virtually non-existent, calling into question the decision to give the oil-rich kingdom such a prominent showcase.

In an interview with the Saudi cultural magazine issued for the fair, Riyadh–Prague, managing director of Book World Prague Dana Kalinová cited the presence of Saudi writers such as 2011 co-winner of the International prize for Arab fiction Raja Alem and 2010 winner Abdo Khal as highlights of bringing Saudi writing to a broader Czech and international public. The problem was that neither writer attended.

Kalinová told Czech Position that she requested the attendance of both writers, but that the Saudi Arabian program was entirely the decision of the country’s representatives. Kalinová said that as far as she knew, Khal was not invited — and that she thought it unlikely the Saudis would have wanted such a controversial writer as part of their representation. She maintained that she is in touch with him and plans to invite him to next year’s fair.

Abdo Khal won what is often referred to as the “Arabic Booker Prize” last year for his novel “Throwing Sparks as Big as Castles.” The satirical account of life inside a Jeddah palace — replete with scenes of sexual violence and the corrupting power of extreme wealth — is banned in Saudi Arabia, as are all of Khal’s novels. Like other Saudi novelists who write outside the narrow confines of what the religious and political authorities consider acceptable, Khal can only publish his books abroad. “Throwing Sparks” is scheduled to be published in English translation in 2012.

In the case of Raja Alem, the Saudis approved her presence and offerred to include her in the program. Kalinová said that in her initial conversation with Alem, the writer had no objection to being part of the Saudi program; on the contrary, she was extremely excited. Alem was on the list at a Prague hotel, and Kalinová is not sure of her final reasons for not attending.

While Khal and other internationally respected Saudi writers were noticeable absences in Prague, the main writer presented by the Saudi delegation brought to mind a familiar variety of a government-approved and employed scribe, a type which had once felt at home in Prague’s Industrial Palace as it hosted the annual Communist Party congress.

A cursory Google search of “Saudi Arabia,” “writer,” and “Book World” will come up with the headline “Saudi Arabian writer Abdullah Al-Nasir attends Bookworld Prague 2011,” accompanied by a photograph. What apparently requires much more exhaustive research is to find out who this literary notable actually is. The lack of even mildly interesting Saudi books on display was a statement in itself.

When first approached by Saudi Arabia about being the Guest of Honor, Kalinová admits to being ambivalent. Yet after speaking to people at the Ministry of Foreign Affairs — and to leading Czech Arabists — she thought the best solution was to invite them and make sure the fair offerred a multidimensional view of the Arab world. By presenting writers such as Morocco’s Tahar Ben Jelloun and Egypt’s Mansoura Ez-Eldin, as well as holding panels dealing with issues such as censorship and the role of women writers, Kalinová was aiming for a balance that she now feels the media backlash is ignoring.

“For us, during communism the outside world never closed itself off, no matter what they thought of the regime here. I think that’s important, and the reaction from Czech people who attended the fair has been extremely positive,” she said, adding that for most people here it is an initial contact with an exotic, unknown culture, and that once having learned something about it people can then form their own opinions.

“Book fairs are about culture, not politics,” Kalinová said.

The sound of silence

Following the revolutionary fervour that has spread across the Arab world, oppressive Arab regimes are not exactly at the height of international popularity. While the Libyan and Syrian governments might be too busy using hard power to worry much about cultural sponsorship, the choice of Saudi Arabia to sponsor the book fair has been a major cause of concern among many at the festival.

“There is a great complicit silence about the nature of the Saudi regime, partly because at the moment they’re not having an uprising,” journalist and Arab-English translator Alice Guthrie told Czech Position, adding that the idea of having Libya or Syria as the guest of honor would be unthinkable now.

Guthrie singled out the current tendency among Western governments to lend their support to the struggle against oppression only after an uprising has already taken place. In regard to the Saudi’s literary profile, even fellow Arabs found the decision to give the Saudi regime a platform somewhat baffling.

The Saudi's desire to be represented at the book fair is all the more ironic considering that the country’s legislative crackdown on book clubs went into effect less than a week before the start of Book World on May 6. According to the new laws, literary clubs in Saudi Arabia have to be licensed by the Ministry of Culture and are required to charge a fee of SR 300 (Kč 1,382). A bewildering array of additional regulations represent an blatant attempt to keep literary discussion under control, which is still a relatively measured response compared to the 2010 firebombing of a literary club in Al-Jouf by religious extremists.