A cool look at a Prague-based gastronomic gem. Does this restaurant deserve its remarkable reputation? 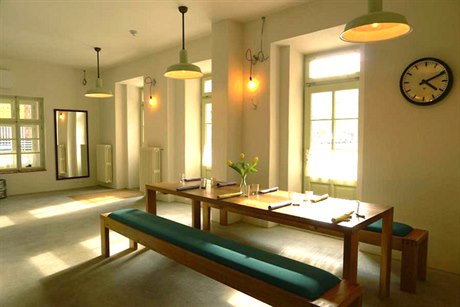 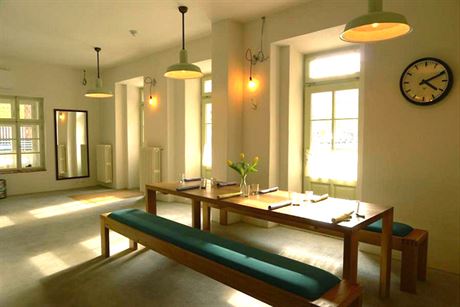 The Anglo-Asian restaurant Sansho has already had a monument to its fame raised in the media, and for good reason. We visited it with one thing in mind: either to 1) festoon the monument with yet more flowers, or 2) furnish it with a more accurate inscription.

The business is so self-confident that it doesn’t even need a sign with its own name, and visitors can have a tough time tracking down its address. But anyone who knows Sansho’s philosophy can’t go wrong — the offer of pig snout and tail on the window is a giveaway.

Paul Day, the chef, trained among other things in the art of Chinese slaughterhouse techniques (in London’s Chinatown, where he apparently once worked as a butcher), squeezes the last out of every animal (with the exception perhaps of a bristle brush). He is best known for his organic pork from Sasov Farm and lamb from Klatovy, which diners virtually pluck from the meadow.

The restaurant prides itself on the top quality of all its ingredients, and all its delicacies are homemade, including steam baked bread and piquant jam, which takes all of three days to prepare.

The restaurant’s design is highly original, though its austerity might not be to everyone’s taste. For anyone who is not partial to long tables with benches, making it easy to share food but in close proximity to neighboring diners, there is a small backroom featuring a cold concrete floor and a trio of industrial lamps.

Between this “heaven and hell” are situated several attractively laid tables with white tablecloths, though don’t peek beneath expecting massive oak and felt — chipboard slabs are supported by simple collapsible metal legs. However, the delicate red flowers in a slender glass vase on the window parapet are a joy, while Asian pin-ups from retro advertisements and calendars peer down from the walls. The chefs can be seen going about their work through a window into the kitchen, brandishing the wok until the flames flare up.

A glass jug full of water is placed on the table to moisten the taste buds, in which there is an unpeeled cucumber, a sprig of mint and a wooden cooking spoon. It’s a very witty and yet refreshing idea. Sansho also offers a range of other tipples, for instance excellent Kumburak beer and its own original creations (right now, for instance, a winter cocktail of gin, elderberries, raspberry juice, Prosecco and lime).

We chose Mackerel Ceviche Taco as a starter (Kč 110 a piece), which is a small tortilla pouch filled with fillet of roasted mackerel. We weren’t quite sure about the ceviche in the title, since it is usually brings to mind fresh fish (not that we’d be interested in this in Prague, so far from the sea). The other ingredients were diced avocado, thin slices of red onion, a heap of coriander, small chunks of grapefruit or pomelo, a small piece of baked red pepper, a spoonful of thick yogurt and plenty of lemon juice.

We thought the pastry would be crispy. However, as soon as we started eating, the filling turned it somewhat soggy. The decorative paper napkin, more used to supporting a cake and on which a taco smiled up at us, separated into several soggy pieces during the course of the dish, and by the end we were spitting out paper — an unexpected experience. However, on the plus side all the ingredients came together to form a very harmonious whole.

Lamb from an organic farm is the main ingredient of one of the main courses (Stir Fry Organic Lamb and Peanuts, Kč 210): thinly sliced and evidently marinated, it completely lacked the typical lamb flavor, so much so that you could almost think it was beef. The peanut sauce provided a dense spicy sweetness, which went well with the delicate jasmine rice. The only fly in the ointment was the fried onion, of which there was far too much. In fact, we craved a fresh, sour or juicy contrast. The sweet, hot and neutrally rice-flavored dish opened up our taste buds, but left us wanting more.

The other main course was vegetarian Red Curry with Green Peppercorns and Vegetables (Kč 189). A huge plate was filled with rice and topped with red curry, in which we found chunks of courgette, green and red pepper, and large cubes of tofu (excellent, lightly fried and without the strangely tough mushroomy consistency which is common in the Czech Republic). The dish was seasoned with coriander leaves, fresh sliced red onion, spring onion and the fried onion which we have already spoken of. The wonderfully flavoured sauce could have done with being a bit thicker. To be honest, it wasn’t the best red curry we’ve ever eaten, though it was certainly a very tasty variant.

What we’ll remember about the service

We had previously ordered wine from this waiter (incidentally, there are only two kinds of house wine and both are fairly expensive – Kč 80 for 1.5 dl of Müller), though he hadn’t backed up his recommendation with any arguments, but had simply said that most people drank Italian wine ... Finally (after a good half an hour) we beckon someone over ourselves.

We ordered dessert – Sticky Toffee Pudding (Kč 145). First impressions were somewhat disappointing. The woodland brown of the cake and sauce was more like steak. However, the first mouthful banished all doubts immediately. The super-sweet caramel carried a square of dense but succulent pastry containing plenty of dates. The title got it right. The dish was decidedly sticky. It was topped off by vanilla ice-cream. The result was a calorific bomb. If you love oriental desserts, you’ll love this. As far as we are concerned, British desserts made by Brits are not completely our cup of tea (they add twice as much sugar as is necessary and the result tends to be heartburn rather than any improvement to the flavour), but then each to their own...

We finished off with Grim Reaper coffee (first of all the milk failed to appear, and when it arrived it wasn’t hot), and then it was time to pay up. The bill came to Kč 880 for one starter, two main courses, one dessert, a glass of wine, one beer and two coffees. All in all we ate pretty well, though we weren’t euphoric over any of the dishes.

The restaurant concept is congenial and the good quality fresh ingredients to be welcomed. However, we had the feeling that Sansho was aimed mainly at masculine taste buds. It was no mere coincidence that male diners predominated. It’s difficult to compare the restaurant, since Sansho is a one-off. Perhaps it’s time for a nostalgic reminiscence. We agreed that we still really missed the sophisticated creations of Anglo-Indian inspiration (and especially the fresh aromatic spices) conjured up by the amazing Sofie Smith of the erstwhile Angel restaurant. So far nobody in Prague has surpassed her...