SANEP: Elections now would be a ‘debacle’ for ODS 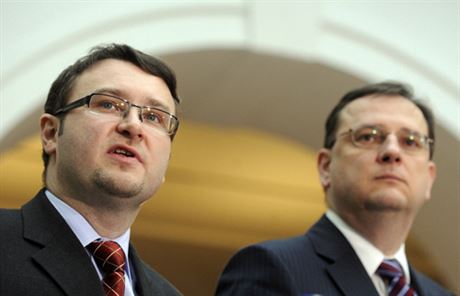 A coalition of the left-wing Social Democrats (ČSSD) and Communists (KSČM) would gain 104 seats in the 200-member lower house of Parliament if elections were held now,  according to an online poll conducted Jan. 27 to Feb. 2 by the Center for Analysis and Empirical Studies (SANEP). The pollsters say the results reflect the impact of recent scandals on support for the Civic Democrats (ODS).

Scandals have caused voter preference for the center-right ODS — which currently leads the governing coalition of the ODS, TOP 09 and Public Affairs (VV) — to erode to third place with 16.5 percent, while junior coalition partner TOP 09 goes into a distant second with 18.3 percent. Both the ODS and TOP 09 saw their ratings drop about a percentage point each since the last SANEP poll at the end of 2010.

The ČSSD held the lead with 34.4 percent, more than twice the ODS’ level of support and about a percentage point higher than in the previous poll. The KSČM was fourth, with 11.8 percent, followed by junior coalition member VV with 8.1 percent. Other parties, including the Christian Democrats (KDU-ČSL) with 3.9 percent, would not make it passed the 5 percent threshold for entering Parliament.

“Parliamentary elections would be an utter debacle for the ODS if they were held [now]. The [poll] clearly show the overwhelming predominance of the ČSSD,” SANEP said in its report.

The results show that voters are not pleased with the scandals in the ODS, which promised during the May 2010 elections to clean up corruption and which has also put forward unpopular belt-tightening measures. “The ODS suffers from its [economic] reform policy and the scandals with its Cabinet ministers. In addition to now former Environment Minister Pavel Drobil (ODS), who resigned following media reports concerning his dealings with the State Environmental Fund (SFŽP), the case with [Minister of Defense] Alexandr Vondra (ODS) has also contributed to the declining voter preference for the ODS. Vondra has so far failed to explain overpriced service contracts during the EU presidency,” SANEP said.

On the other hand, the scandal concerning Transport Minister Vít Bárta (VV) has not had a heavy impact on support for junior coalition member Public Affairs. “This may be due to relatively strong and transparent manner of ministers from Public Affairs, and the fact that the case with security agency ABL is not related to any act of corruption at taxpayers’ expense. This cannot be said of Drobil and Vondra affairs. Transport Minister Vít Bárta has proven to be a very adept politician,” SANEP said.

When the results from the SANEP poll are translated into seats, excluding parties that failed to pass 5 percent, the ČSSD gains 77 seats and the KSČM 27, totaling 104 out of the 200 seats in the lower house. The current ODS–TOP 09–VV coalition gets only 96 seats, down from the 118 it now holds in the lower house. A “grand coalition” of the ODS and ČSSD — as exists in Prague City Hall — would get 114 seats.

Two out of three polls agree

The SANEP result is in line with a Jan. 3–10 poll by the Center for Empirical Studies (STEM), which predicted that the ČSSD– KSČM coalition would get 112 seats in the Chamber of Deputies when unlikely voters were excluded.

These two polls contrast to a January survey by the Public Opinion Research Center (CVVM) of the Institute of Sociology of the Academy of Sciences that predicted the current center-right coalition of the Civic Democrats (ODS), TOP 09 and Public Affairs (VV) would get 52.5 percent of the vote, to 43 percent for a ČSSD–KSČM coalition. The poll results did not exclude parties that failed to make it past the 5 percent threshold for gaining seats in the lower house.