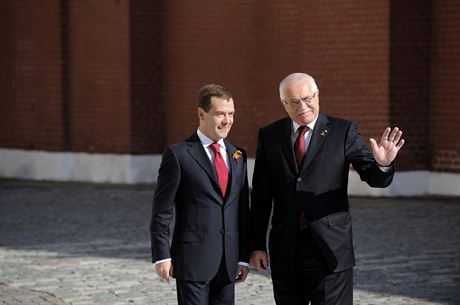 Russia and the Czech Republic will sign an agreement to establish a joint venture to promote the exchange of advanced technologies in the civilian nuclear power sector during the two-day visit to Prague of Russian President Dmitry Medvedev, the state news agency RIA Novosti reported Wednesday.

Medvedev, who is due to arrive in the Czech capital at 7:00 p.m. this evening, will also discuss bilateral trade and cooperation in the energy, transportation and technology sectors with his counterpart, Václav Klaus (who invited him for the visit), and Prime Minister Petr Nečas (Civic Democrats, ODS).

Russia’s nuclear fuel producer TVEL, which supplies the Czech nuclear plant Temelín, and the Czech firm ALTA Invest are to sign an agreement on the establishment of the Technical Services Center “to enable the exchange of technologies for civil nuclear applications, including power generation,” RIA Novosti said, citing the Kremlin press service.

Russia remains a key energy supplier to the Czech Republic, meeting 80 percent of the country’s demand for natural gas and 70 percent of its oil needs, the report noted. A Russia-Czech consortium led by Rosatom is one of three bidders in the multi-billion dollar bid to expand the Temelín plant, run by the state-controlled electricity producer ČEZ, by two new reactor blocks — and the consortium’s bid for the tender is expected to top Medvedev’s agenda.

The Russian leader will also sign a bilateral strategic partnership agreement between the countries economic chambers — the “Declaration on industries’ modernization” — that aims to increase the competitiveness of the two countries, The Voice of Russia website reported on Wednesday.

In this regard, ALTA’s projects at a number of large Russian enterprises will also be discussed, along with the participation of Czech companies in the construction of railroads in Yamal, in the north of Russia, and the establishment of JVs in the construction, timber processing, food production and medical equipment sectors, the website said.