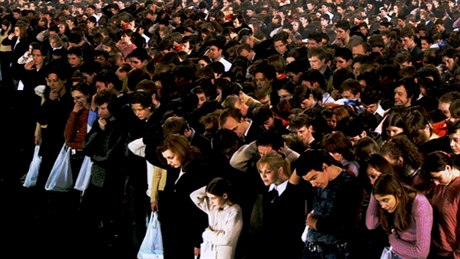 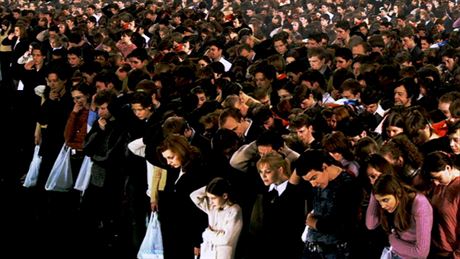 The Czech Centre’s exhibition of contemporary Russian art, Extra Curricular/After School presents the work of five Russian artists working in a variety of mediums and styles. The exhibit is the first step in an effort to renew the artistic connection between Czech and Russian contemporary artists that was formed among conceptualist artists and art critics in the 1960s and ’70s.

“For a long time we didn’t have normal contact with Prague or the Czech Republic, and it’s important for us to have contact with Czech artists,” Leonid Bazhanov, the exhibition curator and director of the State Center for Contemporary Art in Russia, told Czech Position.

While Bazhanov explains that the exhibition is meant to show that there isn’t one trend in contemporary Russian art, he traces one tendency back to renowned Czech art critic Jindřich Chalupecký, who identified a group of Moscow-based conceptual artists, such as Ilya Kabakov and Viktor Pivovarov under the informal rubric of the School of Sretěnský Boulevard. The bond is all the more visible in that Pivovarov has lived and worked in Prague since 1982. Both of these artists were prominently featured in the major Eastern Bloc art retrospective Ostalgia at New York’s New Museum.

Bazhanov says that the Russian artists currently on display in Prague represent the next generation of artists that can be linked together with this school described by Chalupecký. At the same time, he insists the artistic connection between Russia and Central European countries like the Czech Republic and Poland goes beyond any specific artists or critics.

And while Bazhanov says that Russian and Czech art figures have typically met and spoken together at major art events such as the Venice Biennale, he thinks it would be better for these meeting to take place in Prague, Moscow and St. Petersburg for a more substantial bond to be re-forged.

For all the differences between the exhibited artists, there are some shared sensibilities and approaches visible in their work. Vladimir Kupriyanov was trained as a theater director and became one of the innovators of conceptual photography in Russia up until his death at the end of 2011. His 1996 photographic series The Red Belt displays an emphasis on the conceptual over the plainly photographic, and uses the juxtaposition of color photographs of people’s faces with black and white images of a mountaintop with varying amounts of cloud cover and snow.

Victor Alimpiev likewise makes conceptual use of a modern medium, in this case with his 2004 video Sweet Nightingale. The video shows a massed crowd of people performing a series of ordinary gestures – pushing their hair back with their hands or placing a white plastic bag on the ground in front of them. These miniscule gestures take place to a soundtrack of a symphony by Gustav Mahler and give the impression that they are imitating someone off-screen or are following some hidden instructions, as if taking part in a large scale game of Simon Says.

The other three artists represent a shift of focus from people to objects. Vladislav Efimov’s Progressive Movement series shows a series of ordinary seeming objects such as what looks like a light switch or a sculpted ceramic elephant with rockets jets attached and flames shooting out from them.

Nikita Alexeev comes out of the Moscow conceptualism art movement, and his Green Peas series is a series of pictures with green pea-shaped dots gradually filling up the picture space. Rows of canned peas placed on the floor make for a humorous juxtaposition with the conceptual pictures on the wall. The mechanical installations of Kirill Alexandrov are evocative of early 20th century futurist designs on a gallery-size scale and make for an imaginative use of machine parts and geometrical shapes.

Contemporary art and its ability to generate controversy and protest is facing a particularly difficult impasse in Russia today. The legal assault on art groups such as the Voina Group is already well-known in Prague following its exhibition here at the end of 2011, while the latest trials involving the Russian feminist punk-rock performance collective Pussy Riot have been widely reported as well.

Bazhanov thinks that a widespread incomprehension of contemporary art in Russia is one of the main reasons that these groups and other artists have experienced such a strong backlash for their work. “We are trying to take some first steps in education programs for contemporary art but it is a big problem in Russia and we have no institute for art critics.”

This opinion echoes the widely publicized 2010 court statement of curator Andrey Yerofeyev, who was convicted of exhibiting indecent art in a show called Forbidden Art. “We are at the very beginning of the journey toward fully comprehending the foundation of contemporary culture and its values,” Yerofeyev wrote.

If the plans of further Czech and Russian artistic collaboration come to fruition some of the contemporary art Russians will be able to see will be the work of Czech artists. Bazhanov says he was very favorably impressed with the art and exhibition quality he saw on his current trip to Prague to open the exhibition.