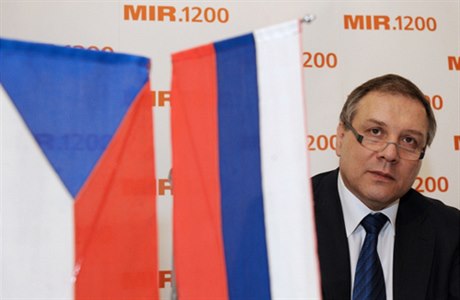 Rusatom Overseas top manager Leoš Tomíček at a press conference Tuesday at which he announced the signing up of a further 10 Czech and Slovak companies as possible suppliers for the Temelín project and some of the 30 reactors Rosatom is building around the world foto: © ČTK, Česká pozice 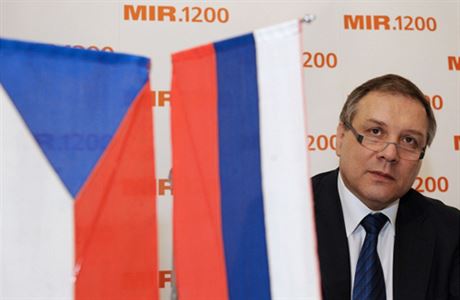 The Russian-Czech joint venture bidding to construct two new nuclear reactors at the Czech Temelín site says that it is willing provide up to 100 percent financing for the project if need be.

“We are ready to provide anything from a small part [of the financing] to 100 percent,” said the operational vice president of Rusatom Overseas, Leoš Tomíček. “It is up to the Czech Republic to decide how much they want,” added the top manager of the overseas marketing arm of state nuclear construction company Rosatom.

However, Tomíček said he believed it would not come to more than 49 percent. That would mean the state-controlled Czech power company ČEZ would to cover the remaining 51 percent of the estimated Kč 150 billion – Kč 200 billion costs of the nuclear expansion.

Tomíček said that a share stake in ČEZ or a joint venture just focusing on the third and fourth reactors at Temelín would be possibilities for a deal. “There are many options,” he said, adding that Rosatom could seek the necessary financing from the Russian state.

‘We are ready to provide anything from a small part [of the financing] to 100 percent.’

Rosatom is one of three bidders to carry out the Temelín expansion in a joint venture with Czech engineering company Škoda JS. Confirmation that the Russian state could help pay for the Czech nuclear expansion will put pressure on the other two bidders, France’s Areva, and US-based Westinghouse, which have to date both insisted they are interested solely in building nuclear power plants — not financing them or having a final ownership stake in them.

The willingness of the Czech-Russian JV to come forward with financing comes amid concerns whether ČEZ can underwrite the nuclear expansion alongside other conventional and renewable power projects already in hand. ČEZ has plans for expanding renewables, mainly in Poland and Romania, an ongoing program for refitting some of it coal-fired power plants and building new gas-fired plants in the Czech Republic.

ČEZ managers have stressed that that the near 70-percent state owned company can finance Temelín’s expansion from its own resources and borrowing, but doing so would put a substantial squeeze on its other plans. The Central European power giant has already contracted French-based bank BNP Paribas to help it explore the possibilities for partners to help come up with the financing for the two new reactors.

“These signals that ČEZ might not have the financing for Temelín are very disturbing for us,” Tomíček commented. “We have invested a lot of money in this project already.”

‘These signals that ČEZ might not have the financing for Temelín are very disturbing for us.’

The Rusatom Overseas manager, who took part in the construction of the Dukovany nuclear power plant when the former Czechoslovakia was part of the Soviet bloc, said that 100-percent financing has been offered for construction of Russian nuclear power plants in Belarus, Vietnam and Turkey. Such a deal or something similar would have to be underwritten by a bilateral agreement between Prague and Moscow, Tomíček said.

While overcoming the financial problem, Russian state financing would create political and diplomatic headaches for the Czech Republic, which sought to distance itself from the Soviet Union following the collapse of the puppet communist regime in 1989 and sought to tie itself to the West as soon as possible afterwards.

Opting for the Russian-Czech bid would be a clear slap in the face for the country’s biggest strategic ally, the US, which has been lobbying strongly for Westinghouse to land the Temelín deal, and France, one of the most influential members of the EU, which the Czech Republic joined in 2004. Paris has been peddling the line of Prague’s key role in a European grouping of countries that could help to push nuclear power following declarations from a series of countries, headed by Germany, that they are no longer counting on it for future power production.

Tomíček was speaking Tuesday in the margins of a press conference to announce the signing up of a further 10 Czech and Slovak companies as possible suppliers for the Temelín project and some of the 30 reactors being currently constructed by Rosatom in Russia and around the world. A similar ceremony in October last year resulted in 15 Czech and Slovak companies being given the chance to benefit from a slice of massive contracts being competed for worldwide.

“We are taking part in nearly all the ongoing [nuclear] tenders around the world. We are talking with Hungary, South Africa, in Latin America, Vietman and other countries in Southeast Asia,” said Tomíček, adding that the Russian company had a target to increase the number of reactors constructed or being built from around 30 now to around 80 by 2030.

“Rosatom is planning to buy equipment and services for the construction of nuclear power plants amounting to more than $300 billion by 2030,” it said in a press release. “We are currently cooperating with Czech colleagues. For example, for the two reactors at the Indian Kudankulam plant, we have nine Czech companies providing fixtures, pumps, cables and other equipment worth $58 million.”

Offers from the three bidders for the Temelín expansion should be submitted to ČEZ by July 2 with the company having until the end of 2013 to decide whether to go ahead with the project and pick a winner.