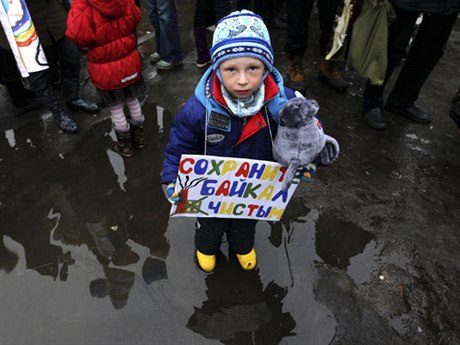 A boy holds a banner reading ‘Keep Baikal Clean’ at a protest in Irkutsk, Sibaria. The new forum could be a very useful platform for smaller, localized civil movements. foto: © REUTERS, Česká pozice 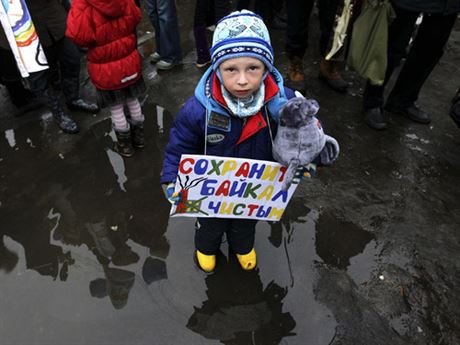 Representatives of over 50 NGOs convened in Prague from March 28–29 to establish the Russia EU-Civil Forum, an initiative for closer cooperation between the respective parties and solidarity among their non-governmental, non-profit organizations. In addition to agreeing on technicalities of the Forum’s functioning and electing members of the steering committee, the conference endorsed a mission statement defining the common factors, values and goals of the participating civil organizations as diverse as Bankwatch CEE and No to Alcoholism and Drug Addiction.

A recurring theme at the EC–Russia Civil Forum was the lack of discourse on human rights in relations between Russia and the EU as a whole and on the bilateral level with individual member states. A stated aim is to address this on the premise that — with greater coordination and solidarity between NGO’s in Russia and the EU — civil society will have a stronger voice and ability to exert influence upon politicians.

“The Forum is not conceived as a formal institution; instead, it should be regarded as a framework for enhanced cooperation, an informal ‘meeting place’ for joint action,” the group said in a press release prior to the forum’s founding meeting.  ‘We are convinced that State structures’ monopoly on principles and mechanisms of international relations elaboration is a thing of the past’

Yet the statement adopted by the founding conference contains clear demands for greater involvement of civil organizations in matters of state: “We are convinced that State structures’ monopoly on principles and mechanisms of international relations elaboration is a thing of the past, and NGOs should play a more essential role in this process,” it reads. The statement goes on to criticize the lack of attention to human rights and civil issues in the new EU–Russia strategic partnership currently being drafted.

“EU and Russian diplomats demonstrated their obvious unwillingness to consider observance of human rights and freedoms as one of the most important factors of international relations. Geopolitical, police, and financial economic factors remain a priority for them. The observance of human rights is rapidly deteriorating, not only in Russia but [also] in European countries,” it continues.

It concludes by inferring that prolongation of the status quo, primarily in Russia, is likely to culminate in violent unrest: “Observance of human rights directly affects European security. The experience of revolutions and demonstrations in Arab countries shows what large-scale destabilization may happen because of a long-term false stability based on repressions, corruption and ‘conspiracy of the world’s silence’ in the face of despotism.”

On the first day of the founding conference held in Prague’s Czernin Palace — the seat of the Czech Ministry of Foreign Affairs — the opening plenary session was attended by Czech Foreign Minister Karel Schwarzenberg; Mikhail Fedotov, head of the Russian President’s Human Rights Council; and Heidi Hautala, Chairwoman of the European Parliament’s Subcommittee on Human Rights.

In his address, Schwarzenberg supported the call for a greater role of NGOs and civil society in international relations: “I attach a great importance to the Forum. It’s important not to leave EU-Russia relations only to the politicians. I hope that civil society will play an important role in the EU-Russia Modernization Partnership,” he said.

Following the opening plenary sessions, four separate working groups dedicated to human rights and the rule of law, environment, social issues and civic participation, and democratic structures and processes convened. The general session on the second day was dedicated to agreeing on proposed changes to membership conditions, location of the Forums’ secretariat, and endorsing a mission statement and the statement of the founding conference.

As for human rights, the Strategy 31 movement, which calls for the protection of the constitutional right to public assembly, has united diverse ideologies from the across the spectrum of Russian political opposition movements. But here again the authorities claim that the movement’s organizers are financed by western interests with ulterior motives. And large swathes of the Russian population have bought this line.

Given the apparent effectiveness with which the Russian authorities have managed to bring into disrepute these NGOs, the question arises as to what benefits cooperation with EU-based NGOs can bring Russian civil movements, and whether such cooperation might actually be damaging.

According to Pominov, the Forum is an initiative that is especially needed by local civil movements in Russia: “The initiative is very important for those organizations that are more local and don’t have resounding names like Transparency International Russia, which can rely on the image of the Transparency International network. It’s very important for, say, local environmental or human rights groups that work in just one region to be able to speak on a larger platform,” Pominov said.

While many may perceive the Forum as a means of harnessing support within the EU to apply pressure upon the Russian leadership to implement democratic reforms, some participants stressed the Forum’s potential for improving mutual understanding between Russia and the EU on the societal level.

“Hopefully, we’ll grow from mutual understanding between the EU and Russia, and hopefully we’ll raise in general the profile and instance of civil society in both Russia and the EU; and I think that’s a realistic goal,” Fraser Cameron, president of the Brussels-based EU-Russia center and elected member of the Forum’s steering committee, told Czech Position.

This echoed a point made by Fedotov of the Russian President’s Human Rights Council: “There is so much to do to improve perceptions of Russia in the EU. Outcomes of surveys show that 70 percent of Russians had a positive view of the EU, while only 2 percent of Europeans had a positive image of Russia. This means that there is a tremendous need to improve contacts between the EU and Russia.”

Yet Cameron, who also says that he has perceived a marked decline in interest in Russia within EU society in recent years, suggests this negative view is predominantly the result of the current political conditions in Russia: “The number of students taking Russian courses and Russian studies is declining dramatically in the EU. Young people are not visiting Russia, they’re not studying in Russia and they don’t even go as tourists. … Young people don’t find Russia attractive. ... Why would you want to go and study in that environment in Russia where there’s no rule of law, no freedom basically, and it’s a static society; it’s not dynamic. Look at their own young people; they’re leaving Russia in the hundreds of thousands,” Cameron said, adding that one of the main goals of his organization is to raise awareness and understanding about contemporary Russia not only among EU officials, but in equal measure in society at large.    ‘There are many Russian and East European NGOs ... with a lot of creative potential and often could inspire NGOs from the EU.’

Sergejus Muravjovas of Transparency International-Lithuania echoed this aspiration and suggests that Russian civil movements could serve as an inspiration for NGOs and civil movements in the EU. “There are many Russian and East European NGOs that are eastward of the EU with a lot of creative potential and often could inspire NGOs from the EU in how to tackle certain issues in a creative way with limited instruments at their disposal and in rather difficult environments,” Muravjovas said.

“I am sure there are many initiatives that originated in the Russian Federation that many people in the EU would be interested to learn about,” he said, adding that even an international NGO like Transparency often lacks information about NGO activities in Russia and Europe beyond the borders of the EU.

The steering committee elected at the founding conference said they will aim to convene the first Forum of member NGOs early in 2012.