President Václav Klaus has the backing from the country’s richest man, Petr Kellner, for a library dedicated to the head of state 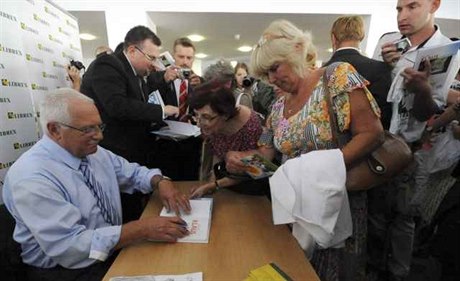 Václav Klaus, seen above at a book signing, looks like he has a sponsor for his memorial library project foto: © ČTK, Česká pozice 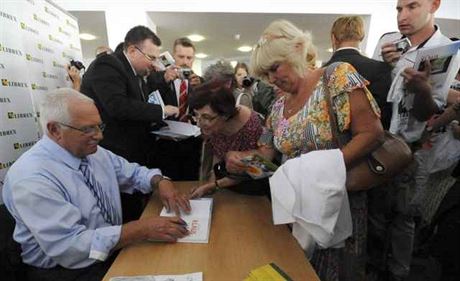 Czech President Václav Klaus appears to have lined up the country’s richest man, PPF’s Petr Kellner, as the backer for the head of state’s planned library. The billionaire’s spokesman signaled for the first time on Monday that Kellner is prepared to dig into his own deep pockets to finance the library project.

“Generally, Mr. Kellner believes that it is right that in the Czech Republic it is a national tradition to take care of the legacy of a democratically elected president. And if there is no action by the state in this direction, this logically makes room for an initiative from the private sector,” PPF spokesman Milan Tománek told the business paper Hospodářské noviny (HN).

The paper pointed out that the PPF investment group, 95 percent owned by Kellner, has purchased three buildings on Prague’s most select street, Pařízská, with speculation rife that one of them could serve as the site for President Klaus’ future library.

‘Generally, Mr. Kellner believes that it is right that in the Czech Republic it is a national tradition to take care of the legacy of a democratically elected president.’

Tománek, however, ruled out that one of the most recently acquired Pařízská addresses was earmarked to be the Klaus library. He said the investment group had bought it and the others as a pure commercial proposition.

Other speculation says that the president’s office has its sights set on a house near Prague Castle, the traditional seat of the Czech head of state and site of the presidential suite and offices.

President Klaus’ spokesman, Radim Ochvat, confirmed to the paper that the library project is the subject of “very serious consideration,” but said that further details were premature.

Following the US lead, presidential libraries dedicated to former heads of state appear to becoming a feature of the Czech political landscape with a rich sponsor in the wings to cover the costs. A library dedicated to former Czech and Czechoslovak president Václav Havel is being paid for in Prague by Czech financier and coal mining billionaire, Zdeňek Bakala.

A library dedicated to Havel has the advantage of being able to draw on his globally recognized literary works, drafts, and documents as well as his extensive literary, personal and political correspondence during his times as a dissident, leading the small, underground, movement against the Communist regime, and later as the main actor in its overthrow and as head of state.

Klaus’ published works, though voluminous and translated into many languages, have not won the same literary acclaim as his predecessor. The turgid works are usually centered on Klaus’ inflated recollections of his role in recent political events or devoted to his twin hobby horses; the flawed conceptions of the current European Union or denials of human responsibility for global warming.

The library tradition is fairly new to the Czech Republic. The mostly gray Communist leaders usually had steelworks, collective farms, and streets named after them, with the first Communist president Klement Gottwald having a whole city Gottwaldov, formerly and now Zlín, bearing his name.

Gottwald’ successor, Antonín Zápotocký, was a well-known  journalist who also turned his hand to novels illustratrating inevitable class conflict. One of those novels was later turned to into an excruciating stereotyped film during his time as president in the mid-1950s. He failed however to have any significant libraries dedicated to his stilted literary plots.