Return of the King: Will Klaus join ODS, Sovereignty or D.O.S.T.? 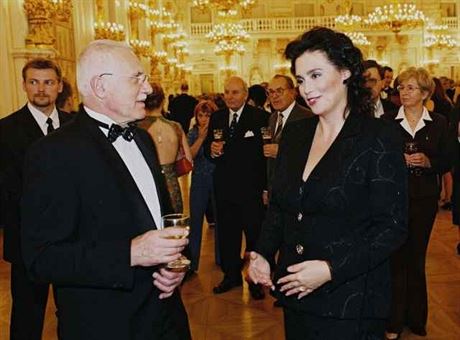 “I cannot envision that on March 7, 2013 I would head off to some cottage in Southern Bohemia or to some remote university. I have the feeling that I will want to continue [in politics]; for now, I cannot say anything more,” Klaus told the daily Právo a couple of years ago, referring to the end of his second term in office, and likely taking a dig at his rival Miloš Zeman, the former ČSSD prime minister.

Klaus has not changed his view, but he was more forthcoming in comments carried by the paper on Aug. 27: “I do not rule out the possibility that a political party could emerge with which I would sympathize in one way or another. But the names and specific ideas that appear [in the press] are amusing,” Klaus said. “Let the media speculate; perhaps thanks to this speculation something will come that nobody else had thought of. … Put another way, I want to say that today I have no such project in mind. … In the coming months, the next year and a half, certainly gives me enough time and information to react to various impulses.”

Klaus has invited the media to speculate: We shall indulge him!

Return of the king

Václav Klaus is a workaholic and homo politicus to his very core. We can expect that after leaving Prague Castle he will go right back into national politics and would be far more inclined to lead a party rather than merely join one.

However, after leaving the presidency, in March 2013, Klaus will be 72; even if still in good health, he will not have the stamina or inclination to crisscross the country to speak at hundreds of meetings and try to mobilize hundreds of thousands of voters. He will therefore need a vehicle for his return to politics, be it an established political party or movement — or completely new entity that draws together people sharing his views.

Klaus founded the center-right Civic Democrats (ODS) in 1991 as the pro-free market wing of Civic Forum, and he was party chairman until 2002, and later honorary chairman. Many remain nostalgic for the era when the “father of ODS” was at the helm. Although Klaus has greatly alienated many in the rank and file, many view the era of his immediate sucessor, Mirek Topolánek (2002–2010), as ideologically void, marked by the rise of cronyism and lobbying for an ODS that had strayed from its original principles.

On the other hand, many others who left ODS years ago remain more critical than supportive of the party, which, under the weak leadership of the current chairman, Prime Minister Petr Nečas, is slowing cleansing itself and ceasing to hold a hegemony on the right. For Klaus to rejoin the ODS and take front stage it would have to also be purged of Nečas.

Among the “impulses” that Klaus alluded to (which would serve as the basis for his decision of where to go after leaving Prague Castle) is how the ODS will fare in the regional elections next autumn, when a third of the Senate seats are also up for grabs. If the party’s decline is confirmed (its own internal research predicts a dismal showing), Klaus would hardly risk humiliation in the spring 2014 parliamentary elections by hitching his “wagon” to a weak ODS.

While Bátora has flirted with Czech fascists groups spouting xenophobic and racist ideologies, it is Bobošíková’s Sovereignty — she was, by the way, nominated by the Czech communist party (KSČM) as their 2008 candidate for president — that rather can tend toward leftist extremism. “The views of Suverenita and Mr. Bátora are consistent long-term. … People take it that we are one, large group with similar ideas. I would stress the fact that I use the phrase opinion-related group, not organization,” Bobošíková told Czech Position in a recent interview. Sovereignty expects to get 15 percent of the votes in the parliamentary next elections; allied with Klaus, it could do far better.

According to its own forecasts, Sovereignty expects to get 15 percent of the votes in the next elections to the Lower House of Parliament (Chamber of Deputies); since the party only got 3.67 percent of the vote in elections last year, it seems a bit presumptuous. Unfortunately, however, it  could take the elections by storm.

Sovereignty takes pride in having drawn in to its grouping some members of Petr Mach’s Party of Free Citizens (Strana svobodných občanů), the Green Democratic Party of Olga Zubová (which helped “bring down” the Topolánek government and elect Klaus for a second presidential term) and even some radicals from the ODS. If it isn’t some kind of propagandistic trick, Sovereignty could continue to become a core concentration of Czech nationalist-populist extremism.

If recession returns the European Union and also to the Czech Republic, leading to increased social tensions and at the same time Klaus allies himself with Sovereignty, it could well win 15 percent (or even more) of the vote. But it is far from a certainty, and there is still time to keep political extremism where it belongs in a democracy, that is on the periphery (a party must obtain 5 percent of the vote to enter parliament).

The basic premise for that to happen is that, first of all, the Social Democrats (ČSSD), as well as ODS and its junior coalition partner, TOP 09, will offer such program alternatives and credible candidates that people will vote for them — and perhaps other parties with which they have experience, like the Christian Democrats (KDU-ČSL) and Greens (SZ). Secondly, unlike last year, when the upstart Public Affairs (VV) party entered parliament (and formed a coalition with ODS and TOP 09, the public will have lost its appetite to experiment with new groups, including extremists.

Not only ČSSD, ODS and TOP 09 but also the KDU-ČSL and SZ — which could both reenter parliament following VV’s all but certain exit, have a historical responsibility to defend our democracy. It must be done, perhaps by engineering early elections, while Klaus is still at the Prague Castle and Bobošíková’s Sovereignty is still too weak to bring about a putsch.