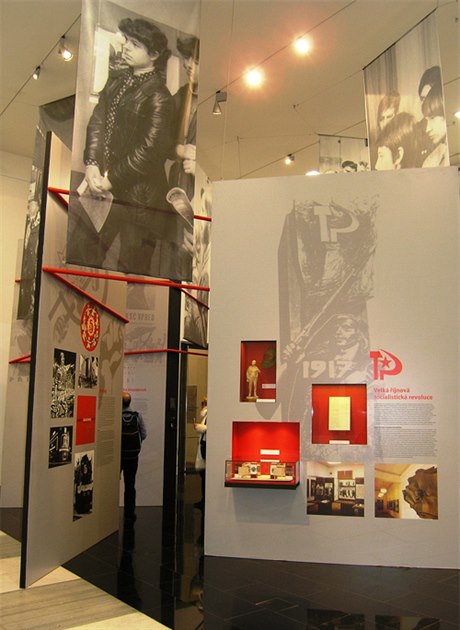 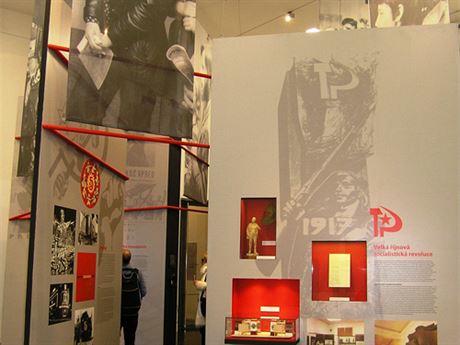 Before the dawn of television and the digital age, radios and newspapers were the primary sources of public news, but museums also helped shape public perception of historical and current events.

The role museums could play in influencing the masses was not lost on the communist leadership of Czechoslovakia that came to power in the 1948 coup d'état that came to be called “Victorious February.” Prior to the 1940s, museum visits in Czechoslovakia were the domain of intellectuals. For your average Czech, a visit to the National Museum, which was officially founded in 1818, was still a once in a lifetime experience until the massive social changes that took place after World War II.

The ongoing Red Museums project at the National Museum shows how a new crowd of museum-goers and a new ideology were linked by the then Stalinist regime in an attempt to create communist “temples of knowledge.”

Through photographs, videos and a wide range of displays with excellent documentation in Czech and English, the exhibition tells the story of how the communist period affected and continues to affect Czech historical knowledge. Items on display include the uniforms of communist youth organizations, hammer and sickle-decorated medallions as well as childrens’ toys and assorted gifts given to party leaders.

From its inception, the communist concept of propagandized museums extended from the distant past to the most recent world historical events. The efforts of any non-communist party in resistance and postwar reconstruction efforts were erased from history and it was not until the ’70s and ’80s that documentation of non-communist anti-Nazi resistance efforts were allowed to be seen together with the officially sanctioned variety. For many Czechoslovaks, that was the first time they had seen any documentation of the “Western” resistance, such as the now well-known case of Czech pilots in the RAF, the British Royal Air Force.

Historical exhibitions were also manipulated for obvious propaganda purposes. Red Museums shows how the Hussite era was adopted as both a revolutionary social movement and as a blatant exercise in hardening anti-German sentiment following the expulsion of the Sudeten German population.

In imitation of the personality cult of Stalin, there was a major emphasis on the leader of the Czechoslovak Communist Party, Klement Gottwald. Not only did Gottwald have a large museum devoted to him in Prague, but his birthplace in Dědice, Moravia, was turned into a museum, showing the simple clothes and working-class newspapers that went into shaping the future champion of the proletariat.

The Red Museums exhibition commentary points out that these propagandized views of famous people’s homes became so absurd that it was ripe material for parody of the comedy team of Zdeněk Svěrák and Ladislav Smoljak in their creation of the mythical Czech everyman Jára Cimrman.

Besides the Gottwald Museum, there was the V.I. Lenin Museum, documenting Lenin’s pre-World War I visit to Prague, as well as the Karl Marx Museum, which was located in the spa town of Karlovy Vary (Carlsbad) due to the founder of Marxism’s having taken the waters there. Drawing visitors to the more didactic and ideological museums in particular proved to be a challenge in Czechoslovakia. In the ’50s they solved this problem by sending delegations of workers, student groups and foreign delegations, but later, especially after post-Prague Spring Warsaw Pact invasion of August 1968, many museums became accustomed to slow days without many visitors.

The story that the Red Museums exhibition tells of communism’s influence on museums behind the Iron Curtain is not a uniform one. After Stalin’s death, the party gradually lost interest in museums, which were able to operate with somewhat more freedom, particularly into the 1960s, with the personality cult of the ’50s fading away.

Following the 1968 invasion, however, Moscow took a renewed interest in museums in the troublesome Czechoslovakia. Red Museums features a short but fascinating video clip of Leonid Brezhnev being led around a Prague exhibition devoted to “the happy life of our people.” During the period of “Normalization” — the period characterized by the initial restoration of the conditions prevailing before the reform period led by Alexander Dubček — museums devoted space toward covering over the scars of the Prague Spring and whitewashing the arrival of what was referred to as the “friendly armies.”

Many of the communist exhibitions were feeble attempts to counter specific realities. In the 1970s in Brno, an exhibition was held titled The Revolutionary Metamorphoses of Rural Areas. The reason for locating the exhibition in Moravia was that agricultural collectivization in the 1950s had caused some of the most severe damage there; thus, the regime was essentially putting a bandage on a gaping wound through lack of any better ideas.

At that point, Czechoslovak museum attendance was at a critical low. There had also been a significant turnover of people working in museums following the Soviet Occupation, causing the quality of exhibitions to decline even further. There remained pockets of genuine intellectual and historical work, but they were exceptions. For example, from the end of the 1970s, Tábor’s Museum of the Hussite Revolutionary Movement organized symposiums where banished researchers were able to stay in contact with young historians.

For a relatively small exhibition, Red Museums touches on a tremendous variety of issues and historical eras, and does so in a very well-designed setting. Other aspects of Czech and Slovak history touched on include the Czechoslovak Legions, which included a selection of wood-carved sculptures made by the soldiers as well as packs of the cigarettes they smoked.

The show concludes with a compelling argument of the extent to which the ideas pushed on people during before 1989 remain accepted orthodoxy, and whether current museums have remained too close to the patterns established by their communist era predecessors.

Red Museums
National Memorial on the Vítkov Hill
U Památníku 1900, Prague 3
Through April 3, 2012