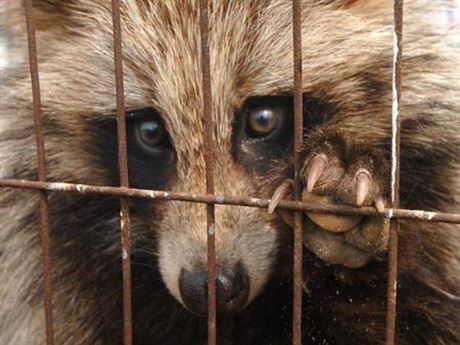 Czechs killed over a thousand raccoon dogs last year (compared to just dozens in the ‘80s), but the population is still growing

A small carnivorous mammal native to east Asia is now thriving in the Czech countryside — much to the dismay of some hunters and zoologists, who say it threatens to disrupt the balance of nature. And it’s now mating season for this invasive species.

The raccoon dog (Nyctereutes procyonoides), whose name means “night wanderer” in Greek, has a thick, dense winter coat — which allows it to survive temperatures below −25° Celsius but is also a curse. It explains why the creature came to be introduced to Europe: for its pelt.

Due to raccoon dogs’ long and coarse guard hairs and their woolly fur fiber, which has a tendency to felt or mat, their pelts are used almost exclusively for fur trimmings. ‘[The raccoon dog] is the most commonly unlabeled, falsely advertised, and misrepresented species found being sold in the U.S.’

According to the Humane Society of the United States, the “faux fur” used as trim on women’s jackets carried in major retail chains in fact often comes from raccoon dogs, “the most commonly unlabeled, falsely advertised, and misrepresented species found being sold in the U.S.,” the animal rights watchdog said, “and there is documentation of this animal being skinned alive in China.”

Czech hunters, however, do not appear to much prize the animal, an omnivore that is adroit at stalking everything from fish, rodents and hares to songbirds and pheasants, feeds almost exclusively on eggs and chicks during the spring period — and reproduces at a dizzying pace.

From 1928–1958, the Soviets introduced some 10,000 raccoon dogs of the ussuriensis subspecies throughout its territories and republics in an attempt to improve its fur quality. The animal is now abundant throughout Finland and the Baltic States and has been reported as far away as France and Serbia.

Although Czechs killed over a thousand raccoon dogs last year (compared to a few dozen in the ‘80s), the population is growing: the creature has a gestation period of just over two months and typically gives birth to half a dozen pups at a time. In neighboring Poland, some 6,000 are killed annually.

But despite their growing numbers, true to its name, “the night wanderer,” though not nocturnal, keeps a low profile, and are even known to hibernate during severe winters.

“You are highly unlikely to catch sight of one during your walks in the countryside because it extremely timid and lives in hiding,” zoologist Jiøí Zboøil told the Czech commercial station TV Nova, adding that the animals are highly adaptable: it’s the only Canidae apart from its distant cousin the North American gray fox that habitually climbs trees in search of prey and shelter.