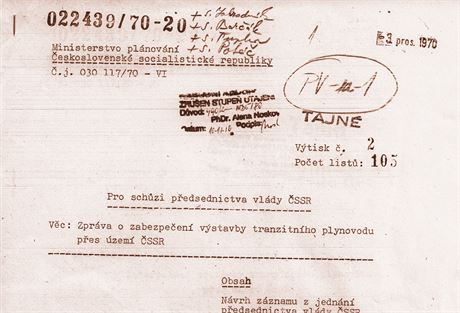 Was the invasion of August 1968 an extreme reaction by Moscow to the Prague Spring, or simply a cynical necessary precondition for a mutually beneficial deal between Western capitalist countries and the Communist Soviet Union on the transit of natural gas? For the moment there is no clear answer to this question nor a “smoking gun” documenting it, but well-known energy expert Vratislav Ludvík does not exclude the possibility.

“From the latter half of the 1960s, the atmosphere in the sharply divided Europe of the day had started to thaw a bit. At the close of the decade, the first talks on the supply of large quantities of Russian gas held between the Soviet Union, on the one hand, and Austria, Germany, Italy and France on the other. The gradual construction of a system of transit pipelines passing through Czechoslovakia then followed,” Ludvík wrote in an article for Czech Position.

“Some people also associate the Soviet occupation of Czechoslovakia with the USSR’s perceived aim to gain territorial control over the future route of this gas export pipeline. Supporting this theory is the fact that gas pipes originally laid out in Poland were at a later stage transferred to Czechoslovakia. Moreover, on Dec. 12, 1970, the Czechoslovak government adopted a top secret resolution on the construction of a transit pipeline,” he says. Prague adopted a top secret resolution to construct a gas pipeline to  Western Europe

Czech Position now has the almost 40-year-old document from the ČSSR presidium from which it is clear that the Soviet Union had signed an agreement on long-term supplies of natural gas to Western Europe countries already back in the late 1960s. In fact, witnesses say the contract was for a 30-year period expiring on Dec. 31, 2002. However, negotiations over such large contracts sometimes last for years, and this is clearly why although the meetings actually peaked before the 1960s were over, the agreement was not signed until 1972.

The documents show that the de facto ČSSR government was given the task of constructing the natural gas pipeline upon Moscow’s orders. And the puppet government in Prague made it a high priority, with the then foreign minister, Andrej Barčák, leading the negotiations with the Soviet delegation.

The construction of the pipeline began immediately in 1971 (before the long-term supply agreement was finalized) and by the following year, some 7,880 people were working on it. The government gave firms taking part in the construction orders to grant blue-collar workers and so-called “engineering-technical” workers a 22 percent preferential bonus.