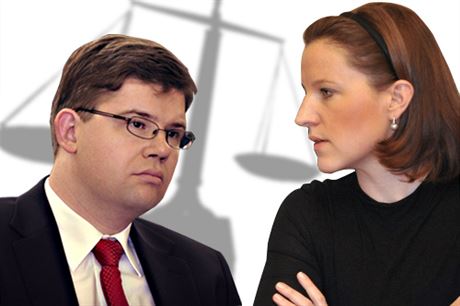 Public Affairs’ (VV) top member of the government, deputy prime minister Karolína Peake, has stirred up a battle over her proposal that she head a government working group to trace out reforms of the Czech prosecution service and police.

The proposal would put Peake in charge of the working group with Justice Minister Jiří Pospíšil (Civic Democrat, ODS) and Minister of the Interior Jan Kubice (non-aligned) as deputy chairmen of what is a central part of the government’s reform agenda, with significant rewards likely for the politician and party that can position itself as leading the fight against graft and reforming the institutions which have proved lacking.

Peake, who heads the government’s anti-corruption drive, faces one major hurdle with her proposal — neither Pospíšil nor Kubice were informed before it was put on the agenda for last week’s Cabinet meeting, and neither have much reason to warm to it.

“I learned about this material when I got to the government, the same as the Minister of Interior,” Pospíšil told Czech Position. “I consider that there is no reason why the ministries of justice and interior should take second place to this newly created body. “This is especially so when a reform of the prosecution service is taking place and the broad legislative aims have been agreed by the coalition. The proposed law should be sent to inter-ministerial comments within the next few days.”

‘I consider that there is no reason why the ministries of justice and interior should take second place to this newly created body.’

Kubice’s ministry reacted in a similar fashion. “This point was put on the government agenda shortly before its start. We did not know anything about such a proposal beforehand,” commented spokesman Pavel Novák.

Pospíšil halted discussion of Peake’s late agenda point at the Cabinet last week due to the short notice about it. The proposal should return for discussion again this Wednesday (Jan. 25) but the chances appear to be slim that it will be approved. “This is just another attempt by Public Affairs to influence the police and public prosecution service,” said a trustworthy source who asked not to be named. Peake was unavailable at the end of last week to answer questions about her proposal.

The fact that Peake’s initiative is not a one-off move from Public Affairs is testified by ongoing events in the lower house of parliament (Chamber of Deputies). The very day that Peake’s proposal surprised her cabinet colleagues, VV chairman Radek John, chairman of the security committee, called for the sub-committee on the reform of the police to be scrapped.

The sub-committee on reform of the police was, until the end of 2011, answerable to the security and defense committee. The governing coalition in December came up with a proposal for a shake-up of that committee aimed at giving John some high-profile role in parliament to help compensate for the loss of his ministerial post last year. The security committee was created as a result, with John put in charge, and a separate defense committee spun off and put under Civic Democrat (ODS) expert Jan Vidím.

In spite of VV’s demands, the sub-committee for police reform was not scrapped but lives on thanks to votes of ODS, TOP 09 and opposition Social Democrat (ČSSD) lawmakers.

John has given a different reason as to why the sub-committee should have gone. “After the [2010] elections, we mistakenly linked the defense and security committees. This had around 30 members of parliament and was not able to regularly get to grips with all the issues. Now we have two committees. The committee for security has 15 members and its most import task is the functioning of the police and state prosecution service. It seemed to me nonsense that there should still be a sub-committee for reform of the police which would deal with some of the same things,” the VV chairman told Czech Position.

The security committee should not deal at all its sessions with just police reform, it has a lot wider mandate.’

Social Democrat security expert Václav Klučka begs to differ. “The sub-committee for police reform does make sense. The security committee should not deal at all its sessions with just police reform, it has a lot wider mandate. That is why the ČSSD called for the sub-committee to be conserved,” he said, adding that John’s stance was in part due to his inexperience of parliament’s workings.

The head of the Czech police, Police President Petr Lessy, has also weighed into the reform debate with his own proposal that a boosted anti-corruption force take shape under his command. The new police unit, according to Lessy, should become the partner of the new team of prosecutors which should take form out of the existing state prosecution service. It should be recalled, perhaps, that Lessy owes his position to a selection committee put together during John’s era as head of the ministry of interior.

The VV chairman himself rules out any coordinated attempt by his party to take the lead in paving out the reforms of the state police and prosecution services. “It’s clear that you cannot solve the questions of police reform and that of the state prosecution service separately. If you look to Slovakia for instance, they work together there and cases of corruption are not swept under the carpet,” John commented.

Reforms of the current state prosecution system envisage cutting the four-tier system to three with a special division of prosecutors being created who would deal with cases of corruption and financial crime. The service has come under particular fire in recent months for failing to get involved actively enough and offering help to Swiss authorities investigating suspected tunneling and fraud at former state-owned mining company Mostecká uhelná společnost (MUS).