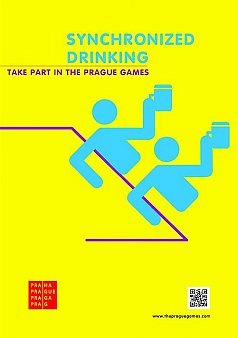 Prague City Hall is spending around Kč 2.4 million on a marketing campaign in London in May to entice UK residents to visit the Czech capital during the summer Olympics. The campaign will not however feature beer — the prime attraction of the Czech Republic for many Britons — as originally planned due to British advertising standards banning the association of alcohol with sport.

The firm EURO RSCG was awarded a contract worth Kč 2 million to design the posters for the Prague administration’s campaign. The agency came up with a series of posters comparing activities for visitors to the Czech capital with Olympic disciplines. Two of them, however, will not appear in the UK. One of these proposed posters carries the main title “Synchronized Drinking,” followed by the generic slogan for the marketing campaign “Take part in the Prague Games.”

Another pseudo-sporting slogan which was thought up but ditched was “Morning Slalom” featuring two presumably drunk figures weaving their way around lamp posts.

Prague City Hall wants to attract London residents who are looking to leave the UK capital during the Olympic Games. The marketing campaign will consist of a promotional team handing out information and a competition at a stand at Liverpool Street rail station for five days and at Stratford station, adjacent to the main Olympic site, for two days.

Two teams of two will also hand out fliers in bars and restaurants and other public locations in the City, Soho, and Angel districts of London.

Prague City Hall says it is also planning on spending an extra Kč 300,000 to Kč 400,000 on advertising, including a spot in the London Evening Standard and several billboards.