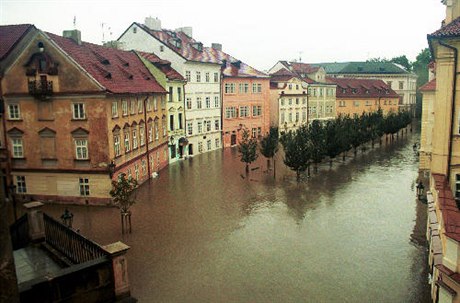 The Czech capital’s flood defenses are in a poor state with holes and large cracks in some of the concrete barriers constructed to prevent another massive inundation of the type that occurred in 2002, the daily Lidové noviny reported on Wednesday. Channels to divert floodwater are also clogged up so that they cannot fiction, it added.

The daily said that a brief survey of existing barriers showed holes and serious cracks in sections of the concrete barrier protecting the northeastern suburb of Libeň which suggested that it could not stand up to any floods, said parts of the historic center on the left side of the river were at risk, as was the southern suburb of Modřany from blocked conduit, which was supposed to be used for relieving the pressure of floodwater.

Prague Mayor Bohuslav Svoboda (Civic Democrat, ODS) has called for immediate checks on the capital flood preparedness after hearing of the problems, the paper said.

The city carried out tests of flood protection in the low lying Holešovice suburb of the city at the start of October last year which were judged to be satisfactory. It plans a rolling program of tests until 2014.

The so-called 100-year flood of Prague in August 2002 — which were actually the worst floods in 200 years — caused large sections of the city to be evacuated on both banks of the Vltava river and flooding of significant parts of the city, especially the Holešovice, Kampa, and Karlín areas with the capital’s subway flooded and closed for months.

Buildings in some of the areas that bore the brunt of the flooding had to be destroyed because they were judged to be at risking from collapse. Afterwards, Prague city council bought pre-fabricated flood barriers for parts of the city center that could be quickly assembled and began building new barriers along other stretches alongside the river.