Old and new photos of Žižkov, two days of concerts and lots of street theater mark the neighborhood’s celebration of its cool demeanor 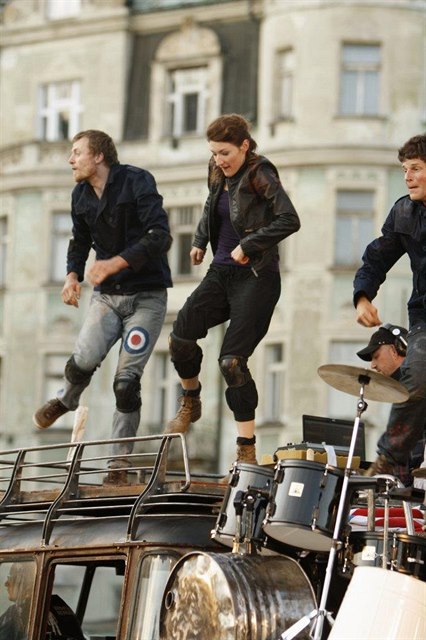 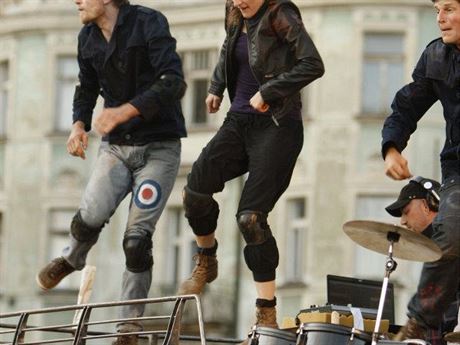 The Žižkov district of the Czech capital has always been a bit different, marching to its own drummer. It is often described as Prague’s Brooklyn, with a mix of working class people and artists. Long-time residents know the area as the “Free Republic of Žižkov.” A series of events and exhibitions under the banner Žižkov Sobě — roughly meaning Žižkov to itself — enbraces the dictrict’s uniqueness.

The festival, which is in its fifth year and runs until the end of June, is intended to bring culture and leisure activities to nontraditional places that normally serves different purposes, according to Eva Kociánová, the PR representative of Pálac Akropolis, one of the organizers of the festival.

“We want to attract people who normally wouldn’t go to shows and events,” she said, adding the festival helps to link different generations and groups of people in the diverse neighborhood. All of the events are free.

The festival has already started, with an exhibition of photographs commemoration the 80th season of the Club of Amateur Photographers in Žižkov (KFAŽ). Dozens of pictures — both framed originals and reproductions grouped together on large display boards — are at the Prague 3 office of insurer Všeobecná zdravotní pojišťovna (VZP). “The selection was made by current members of the club and focused on Žižkov as a theme,” Kociánová said.

Some local history can be seen in the archival selection, with black-and-white images of the statue of giant horse statue of Jan Žižka under construction and later surrounded by visitors shortly after it was finished. Long-gone and altered vistas appear side by side with some places that are virtually unchanged, with only the fashions of passersby to show the passage of time.

Along with landscape shots in various formats there are artistic efforts including posed nude models, studies of textures and contemplative portraits. “The border between amateur and professional is very thin,” Věra Matějů, the head of the Czech Union of Photographers (SČF) said at the opening of the exhibition. “It is good that the club has continued because it has given Žižkov a chronicle and a memory,” she said, adding that over the years several well-known photographers have been members. Some of the photographs in the exhibition are attributed to specific artists, but the bulk are presented as anonymous works.

A second photo exhibition will start June 1 in the foyer of Pálac Akropolis. Křehké omítky, or Brittle Renderings, will show recent works by Jitka Kopejtková. “They are photographs of graffiti, and not only from Žižkov facades,” Kociánová said. This exhibition shows a more contemporary look at the neighborhood and urban environment in general.

The pictures capture the current trends in street art, such as stenciled images as well as details of posters. Weather and the interaction of anonymous people often transform the original images into something new — the original becomes a collective artwork in the freewheeling gallery of urban streets, which Kopejtková captures in photographs.

Music on the hill

Two days of concerts on Parukářka, the hilltop park near Olšanské náměstí, will probably attract the most interest from the public. Local ska band the Chancers headline on June 13, with support form Pub Animals, Chaotic and DJs from Radio 1. A fixture on the Prague music scene since 1998, the Chancers have a mixed Czech and British lineup fronted by Simon Ruffskank.

Their music appears on their own albums as well as international compilations.“Four years ago we prepared an evening of ska and it was quite successful,” Kociánová said. “So it has become a tradition to devote an evening to ska.” But it is not the only type of music that is popular in the neighborhood. “Certainly I do not think that people from Žižkov can be characterized only as lovers of ska,” she added.

For the ska-skeptical the following day offers a different genres, dub and hip-hop. UK-based band Dub Pistols is the headliner, with support from Czech act Bonus and the return of DJs from Radio 1. Music by Dub Pistols has appeared on soundtracks for films such as “Blade II,” “Bad Company” and “Mystery Men.” The band’s hits include “There’s Gonna Be a Riot.”Aside from the music, there will be a fashion show. In case of inclement weather on either day, the concerts will move to Pálac Akropolis.

Taking it to the streets

Public performances make up a large part of the festival. The ensemble Traffic Dance, a project of Spitfire Ensemble, will perform “Mogal na cestách” on several different days beginning May 24 at náměstí Jiřího z Poděbrad and at Parukářka. “The core of Traffic Dance is a specially adapted decommissioned firetruck. It was converted by artist Lukáš Rais to serve as a theater and music stage,” Kociánová said. “Mogal na cestách” includes fire dancers and percussion.

Toward the end of the festival, on June 27, the group will perform the premiere of “Drums.”  “For ‘Drums,’ the truck will be fitted out with special musical instruments,” Kociánová said. Later that same day, Traffic Dance will present the premiere of “Show CZ,” a new Czech version of “Show,” which played at last year’s festival.

A visiting company from Germany lends an international flavor to the street performances. Bängditos Theater will stage the Prague premiere of “Überfluss,” an absurdist drama set around the dedication of a fountain. The well-planned ceremony goes a bit awry as the fountain fails to cooperate.

Other events in festival include a day for children and families, juggling workshops and performances, a table football competition, and a tournament for the Swedish lawn game called kubb.