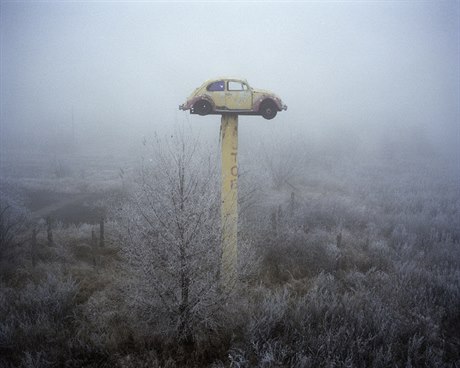 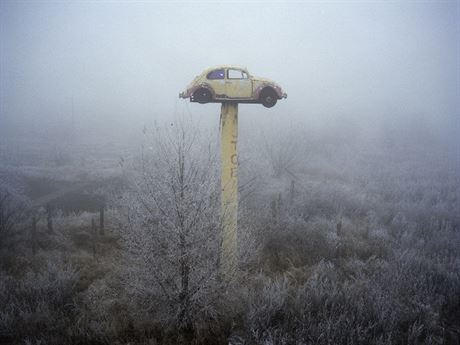 The most significant change the exhibition has undergone is the change of venue. While the central location of Mánes brought random passersby to see the show, the new space is even more suited to exhibiting photography, with the industrial architecture of the contemporary art museum replacing the functionalism of the former venue to powerful effect.

Besides the initial comprehensive exhibition at Dox the Prague Photo Festival continues throughout the month and beyond at 15 different venues all over the city. Long-term exhibitions that are already underway include a Jan Reich retrospective at Prague Castle, an exhibition of the work of Bernd and Hilla Becher at the Rudolfinum as well as of Jaroslav Fišer at Galerie AzeReT. Also underway is National Awakening by Salim Issa and Štěpánka Stein at Josef Sudek Studio (Ateliér Josefa Sudka). The show recreates mythic and iconic images from Czech culture with Vietnamese models, offering an ironic twist on conventional nationalist myths and showing the vast distance between 21st and 19th century life here.

Exhibitions opening over the coming weeks include, among others, the photography of Bohdan Holomíček, Image Source by the Dutch img_src collective, a Czech-Italian historical photography exhibition titled Boemia Mia at Prague’s Italian Cultural Institute and a Czech émigré documenting his newfound New York home at Leica Gallery Prague.

There are 25 galleries taking part in Prague Photo at Dox, with a strong emphasis on the work of renowned artists such as Josef Sudek,František Drtikol and Jaroslav Rössler. PPF Art is exhibiting its new acquisition of 15 photographs of Miroslav Hák, whose work is not as broadly known internationally as some of his compatriots but is another excellent example of the classic era of Czech photography.

Another internationally less well-known photographer whose work is exhibited in an extremely evocative manner is Václav Chochola. By mixing in Chochola’s portraits of famous figures such as Louis Armstrong and Salvador Dalí with music, film and selections of old photos from sources such as the Soviet Press Agency, which for only Kč 20 each can be purchased so visitors can bring a piece of the black-and-white communist past home with them.

Prague Photo has also expanded its range of young photographers, with the total number of photography schools participating in the show increasing to seven. The student work takes up the upper floor of the exhibition space and displays a tremendous variety and high level of work.

The new work of many of the same Czech and international students of the Film And TV School Of Academy Of Performing Arts In Prague (FAMU) that exhibited at Prague Photo 2011 and Famufest is on display, as is work by photography students at the Institute of Creative Photography in Opava, some of whom have likewise appeared in major exhibitions in the capital over the past year.

A strong new addition to Prague Photo is Galerie Montanelli’s display of two German women photographers Stoll & Wachall, who combine figurative and abstract work in a series of photographs of arms and shoulders isolated against black backgrounds. “This is very interesting work because it’s something completely different to the Czech eye,” Nesvadbová said.

The gallery is also showing the work of Czech photographer Magdalena Bláhová, who gives a visual slant on the festival’s more international approach in a beautifully displayed set of pictures blending images of Prague and New York City. By concentrating on the seemingly interchangeable aspects of the two cities – Chinese restaurants, rundown buildings and street scenes – it takes a close look to be able to determine which city many of the photographs show.

For the first time a foreign gallery is exhibiting. Le Lac Gelé is a photography gallery from Nîmes, France and are exhibiting the work of five different photographers. “We are having a roundtable discussion with the French gallery because they have asked us to organize a presentation of young Czech photographers next year in Nîmes.”

Young Czech photographers will have another international presentation much sooner, with Prague Photo in Brussels starting May 4 through the end of the month at the Belgian capital’s Gallery of the Prague House. “We are taking a whole collection of different exhibitors there,” Nesvadbová said.

According to Nesvadbová international interest in Czech photography and Prague Photo in particular is showing concrete signs of growth. “I just spoke with someone from a very good Berlin gallery who wants to participate in the exhibition next year.”