The Prague City Council wants to cut costs on the controversial Kč 36 billion megaproject, but concessions and savings are scarce 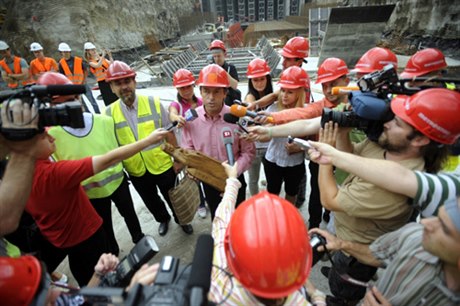 Ex-Prague mayor Pavel Bém attending a ceremony to mark the beginning of drilling on a section of the Blanka Tunnel, which is now over budget and behind schedule foto: © ČTK, Česká pozice 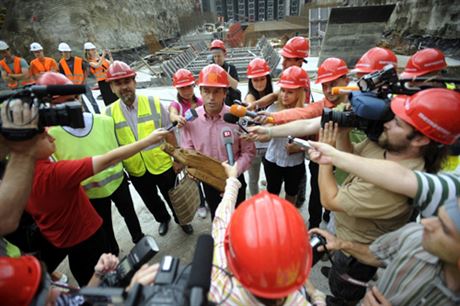 The Prague City Council meeting this week did little to answer the quintessential questions about the controversial Blanka Tunnel complex: Who will complete it, when, and at what cost to the Czech capital?

Council members, who have reams of documentation at their disposal examining the minutest of details about the megaproject — the estimated cost of which has skyrocketed from Kč 26 billion to Kč 36 billion — still appear to be in the dark.

“We will meet with all parties concerned so as to review expenses and the possibility of discounts,” said First Deputy Mayor of Prague Karel Březina (Social Democrats, ČSSD) following Tuesday’s meeting, acknowledging concerns about cost overruns.

The result of these negotiations between the stakeholders should be known in April; in theory, it would be possible to save some money by reducing the city’s requirements as regards the surface finishing and technology costs, as these can be addressed after the construction work is completed. Perhaps the construction companies will also offer discounts, but first the municipality itself needs to get to grips with the figures.

The Council has broken down costs into four basic categories: the Trója Bridge; additional requirements of the Bureau of Mines; additional costs related to stricter norms; and the requirements of individual city districts, which will manage the tunnel complex.

Of the Kč 10 billion extra in estimated costs, the bulk relate to the Trója Bridge project. When Metrostav won the tender in 2006, costs were estimated at only Kč 400 million. Now, a more demanding version of the plan — which resulted from an architectural contest held by the Prague municipality — puts the figure at Kč 1.2 billion. There will also be higher expenditures for the related infrastructure network.

“Most of the additional costs for the Blanka project stem from 2007 to 2010,” claims Březina, refuting the allegations of the Prague mayor during that time, Pavel Bém (Civic Democrats, ODS), who casts the blame on the current city administration. The current mayor, Bohuslav Svoboda (ODS) says that the former Prague Council didn’t do its homework, having “only met once” to discuss the budget for the mega construction project and even that 2008 meeting was “only to get information for orientation.”

There is no shortage of speculation and blame connected with the Blanka project and the cost overruns, but only recently has much attention been paid to the question of commissions — which a source has told Czech Position could be from 40 to 50 percent of total costs. Also widespread is the belief that the current Prague municipal leadership has purposely overestimated project costs, so that any “discounts” the councilmen may obtain from contractors will help them gain favor with the electorate.

The original plan was that the Blanka Tunnel would be in operation already in 2012. The timetable is, however, completely unrealistic; for example, the Trója Bridge hasn’t even received a final building permit. Svoboda has pushed back the target completion date to 2014, but the Council admitted on Tuesday that it cannot say when the Blanka Tunnel project will be completed. The total cost must be recalculated and Prague’s budget for investment examined.