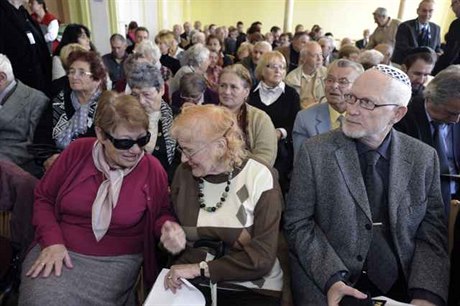 A meeting of former prisoners of the Terezín ghetto, held by the Terezín Memorial in association with the Terezín Initiative foto: © ČTK, Česká pozice 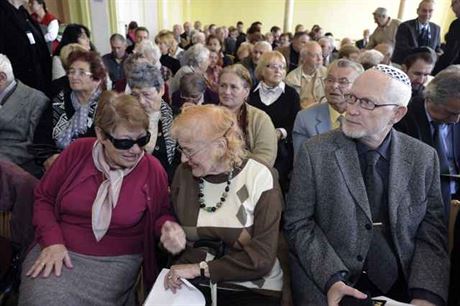 Nov. 24 marks the 70th anniversary of the first deportation of Jews from Bohemia and Moravia to Terezín, from where many of them were sent on to Auschwitz and other death camps. Prague’s Jewish Museum is commemorating the occasion with lectures, concerts and assorted events with Holocaust survivors and historians offering valuable insights to put the tragic events into a contemporary perspective.

“I think it’s important to understand that the 70th anniversary, like any round anniversary, is a kind of checkpoint, in the sense that you have the possibility to rethink what you are doing and what the memorial of the Holocaust is about,” Michal Frankl, the head of the Shoah History Department at the Jewish Museum, told Czech Position.

Frankl says that ideally we could reinterpret and reconsider the Holocaust without needing anniversaries, but society needs landmark dates to focus on history. In the case of this round anniversary it is even more relevant, as in all likelihood it will be the last round anniversary that Holocaust survivors themselves can mark.

During WWII, the Gestapo turned the garrison town of Terezín (Theresienstadt) into a Jewish ghetto. More than 33,000 of the 150,000 Jews sent there from Czechoslovakia and abroad died within its walls, mainly due to the appalling conditions arising out of extreme population density. About 88,000 inhabitants were deported to Auschwitz and other extermination camps. At the end of the war there were 17,247 survivors of Terezín.

The first time former prisoners met at the site itself was in 1991, but Frankl says that it was hardly seen as big news at the time. Times have changed, and the 60th anniversary in 2001 resulted in much greater interest from the media as well as among students and educational projects, municipalities installing plaques and changes in Czech textbooks.

“We all are totally sure that it’s very relevant, but we cannot avoid giving it a new meaning. Theoretically, it would be nice if we could do this without any anniversaries, but the way societies function we need anniversaries to do this,” Frankl said. “This is a story of partial successes, but also some failures. I’m not sure it always leads us to rethink alternative ways to the tell what happened in the Second World War, especially how we tell the Czech story of the war.”

Frank cited recent mainstream examples of Czech publications that deal with the war as showing more tolerance and openness towards minorities while remaining highly ethnocentric. “It’s a strange combination of talking about minorities only in certain contexts and means that they are not that essential to the core of the story.”

One of the events meant to reach out to the Czech public is the opening of the Pinkas Synagogue on Sunday, Nov. 27.  The site of the memorial to the Czech Republic’s 80,000 Holocaust victims was one of major projects of the postwar Jewish Museum in the ’50s and one of the ways it tried to cope with the legacy of the Holocaust.

Frankl says how the director of the Jewish Museum at the time, Hana Volavková, was close to artistic circles and brought in two painters, Václav Boštík and Jiří John, to hand paint the 77, 297 victims’ names on the synagogue walls. “They created this memorial concept, which is unique in many respects. It’s not only a list of names, it’s a work of art,” Frankl said.

The painters spent much of the ’50s painting the names on the wall of the synagogue and the memorial was opened in 1959. Frankl points out the discrepancy of a Holocaust memorial being allowed during a highly anti-semitic period in communist Czechoslovakia, following the show trial and execution of Rudolf Slánský and other party officials, the majority of them Jewish.

“In this context, talking about the Holocaust – or anything Jewish – might even be dangerous and hardly anyone did it, but my interpretation of this is that the Pinkas Synagogue was seen as a purely religious space that belonged to the Jewish community but didn’t belong to or speak to the public space.”

Opening up the synagogue today is an attempt to make it a part of the Czech public space and thus make the names memorialized within it part of the larger Czech story.

The Jewish Museum is also intent on broadening the Holocaust dialogue to include the postwar experience of survivors. ‘I think in some respects it’s important to realize that, on a personal level, the Holocaust didn’t end in 1945.’

“I think in some respects it’s important to realize that, on a personal level, the Holocaust didn’t end in 1945, and that these people are not only survivors who suffered during the Holocaust but that they have their stories after the war. They generally were living in an environment that wasn’t open and friendly. They also had to cope with the fact that their families were incomplete, as their family members had usually been murdered,” Frankl said.

Frankl also sees their situation as a good starting point for thinking about the postwar period. With the country virtually cleansed of its minorities through both the Holocaust and the subsequent expulsion of Germans the situation for the members of minorities who remained or came back was all the more tenuous.

The Jewish Museum is not confining its interest in this topic to the anniversary, but has been working for the past two years on an oral history project focusing on the postwar experience of survivors, revisiting with previous interview subjects and asking them to elaborate on issues such as postwar memories of the Holocaust and their relations with the Jewish community after the war.

Holocaust
Vstoupit do diskuse (1)
Registrace: smskou dopisem
diplomate Not to forget In the face of a person building a house in the Czech Republic... 10:00 24.11.2011