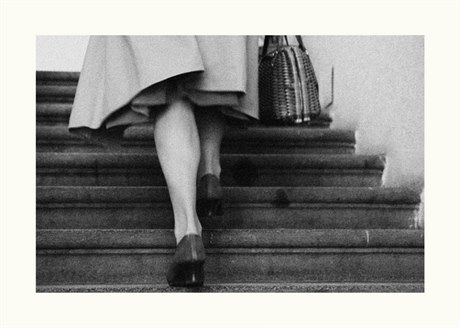 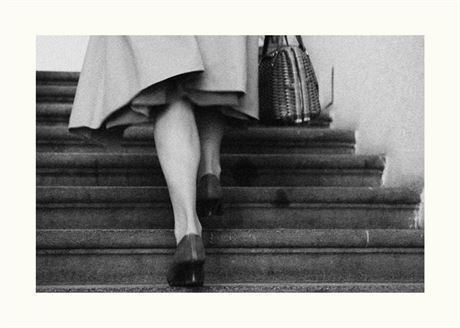 Central European photography is on view at Leica Gallery Prague with an exhibition of the winners of the FRAME competition. Open to the Visegrád Four countries of the Czech Republic, Slovakia, Hungary and Poland, the competition has drawn work from both student and professional photographers working in styles ranging from realism to the abstract.

The FRAME competition winners were decided in Brno in November 2011 by a jury comprised of Czech photographers Ivan Pinkava, Josef Moucha and Vojtěch Sláma along with the head of the photography department at Moholy Nagy University in Budapest Ábel Szalontai and Slovak art theorist Bohunka Koklesová. Though the competition attracts entries from all four Visegrád countries, a majority of around two-thirds were Czech. With the competition based in Brno, there has also been a tendency for the student winners to come from Moravian photography schools, and this year is no exception.

First prize went to a pair of students at the Institute of Creative Photography of the Silesian University in Opava, Gabriel Fragner and Anna Gutová, for a project titled “I love my family.” The photographs look like they were taken from a photo album from the 1970s. Through the use of clothes and décor from the period in Czechoslovak history known as Normalization, as well as material that gives the work the appearance of photographs from that time period the pair create a convincing artistic equivalent of personal and historical documentation.

Second prize and the Leica Gallery Prague special award went to Hungarian photographer Akos Czigany for his series “Skies.” Czigany photographed skies framed by the courtyards of apartment buildings. The skies in the pictures are uniformly whited out, pushing the focus back on the architectural frame within the frame.

The pictures’ subtitle is an homage to Japanese artist Hiroshi Sugimoto, with the white skies evoking the whited-out movie screens of Sugimoto’s Theaters project, which formed part of a Milan Kundera-inspired exhibition in New York last year. Czigany told Czech Position that the idea for the series started with a theme for the 2010 Lucien Hervé and Rodolf Hervé Prize, which was “the language of the city.” He won the competition but began without intending to pay homage to another artist.

“However, after the first few shots were ready it was obvious that these photographs turned out to be reinterpretations of Sugimoto's Theaters as well and that it was no mere accident,” Czigany said. The previous year he had published an essay entitled “Time-time: Tomatsu, Sugimoto, Shibata” exploring the significance to him of certain Japanese photographers and Sugimoto’s Theaters played a key role in his argument.

“The birth of my Skies a year later proved that this preoccupation with Sugimoto’s work went far beyond the realm of theory and half consciously, but importantly, inspired me to create. It was natural to recognize this influence with an homage in the subtitle of my series.”

Czigany says that the visual idea and the tribute spontaneously coincided and that determining which came first is beside the point. “I am glad that I could append a meaningful footnote to a classic work which I hold in the highest esteem.”

The third prize went to Jan Grombiřík for a series entitled “Annunciation.” Through the use of and focus on light sources these abstract photographs give everyday locations such as a lamppost in a park the appearance of objects from outer space.

The work of the three finalists is also on display at the gallery. Polish photography student in Opava Anna Grzelewska presents “Julia wannabe,” a long-term project exploring feminine identity and searching for the moment when a young girl becomes a woman. The portraits show young girls in various situations – listening to Madonna and then putting on make-up to look like the singer, standing above an expansive field holding a cell phone and crying. More than ordinary portraits these pictures contain a larger story in miniature, blending many of the surging emotions of that period of transition and resulting in an image of childhood that goes beyond the easy idealism and sentimentality.

Another Polish photographer among the finalists, Paweł Fabjański aims at a later transitional period in life, taking a darkly humorous look at a thirty something slacker in his series “Auto Fire.” These pictures also pack a story in them by balancing between the naturalness of documentary work and the artificial and absurd. Images of a man lying face down in a puddle or another forming a stepladder out of books to reach a light bulb defy expectations of images from real life.

Dagmar Vyhnálková’s “Heart on Fire” creates its effect through the juxtaposition of diverse images meant to reflect a confining relationship. Images of a barred window is hung next to that of birds in flight and a man looking depressed, wrapped in a blanket, as if not wanting to get out of bed.

As the competition is focused on the Visegrád Four countries it is natural to wonder whether the work taken as a whole shows any Central European commonality, a shared sensibility or stylistic similarities. While Czigany admits that there might be “a special relation to past, tradition and time, grounded in history,” that the photographers share he doesn’t think it translates so directly into common artistic features.

“As limited as my perspective is, I do not see the outlines of such a regional character. Perhaps many of us have this gut feeling that such a sensibility does exist, but to actually identify it in a group show like this seems a bit too adventurous.”