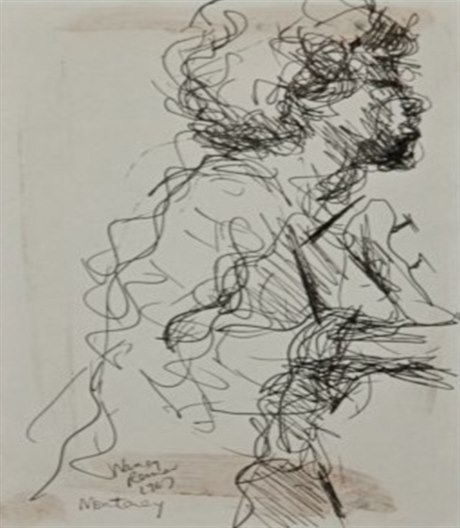 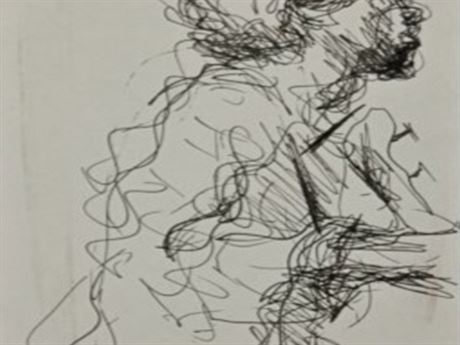 The Art of Hard Rock is an exhibition at Prague’s Dvorak Sec gallery showing the intersection between Rock’n Roll and the visual arts. The exhibition includes paintings, drawing and other visual art by an impressive list of famous names from the world of rock music and derives from the collection of the Hard Rock Café in Orlando, Florida.

Hard Rock Café, which was founded in London in 1971, now has a collection of Rock memorabilia that numbers over 73,000 pieces worldwide. That the company began collecting artworks, instruments, outfits and rare photographs of musicians came about through the whim of guitarist Eric Clapton. A regular at Hard Rock Café in London, Clapton asked to have his guitar hung up over his favorite barstool as a way of reserving his place. A week later The Who’s Pete Townsend followed suit, sending a guitar and a note reading “Mine’s as good as his! Love, Pete.”

The Czech Republic’s own musical legend, Karel Gott, spoke at the press conference about his own painting, his influences and ambitions as an artist. He had applied to the Academy of Fine Arts, Prague (Akademie výtvarných umění v Praze) in 1954 and was not accepted, but says he is glad now that he is self-taught. Seeing all the other painting being done by fellow rock stars prompted Gott to joke, “I’m glad I’m not the only crazy one.”

Gott’s painting in the show, The Ecstasy of Saint Theresa, aims more than any of the other works on display to hark back to the grand tradition of European painting. Gott began to focus more on his painting in the last two decades and has exhibited his work both at home and abroad in cities such as Berlin, Moscow and Vienna.

Not surprisingly, the majority of the work depicts the world of Rock music, whether painted by a musician or not. Some of the highlights include the late bassist of The Who John Entwistle’s caricatures of band mate Pete Townsend, a self-portrait and a painting of Elton John as “Rocket Man” flying above the earth wearing his trademark flamboyant glasses and rainbow-colored platform shoes. Entwistle’s caricatures were used for his cover art for The Who’s 1975 album “The Who by Numbers” in which the band is depicted in a connect-the-dots drawing.

Other rock portraits in the show include a pencil sketch of Buddy Holly by former band mate and childhood friend of David Bowie, George Underwood. Album cover art also plays a prominent role in Underwood’s career. Among the covers he did are Bowie’s “Ziggy Stardust” and “Hunky Dory” as well as the psychedelic cover for the debut album by T-Rex.

Probably the most well-known artist among famous musicians is Rolling Stones’ guitarist Ronnie Wood. Wood has had numerous exhibitions of his paintings and includes among his buyers former US President Bill Clinton, who purchased a portrait of Billie Holiday and Bessie Smith as well as a painting of The Rolling Stones performing. Wood’s painting at Dvorak Sec shows Stones Charlie Watts and Keith Richards and incorporates a set list into the picture.

Not all the artwork on display is the product of musicians that devote significant time to a second calling. A spiky, abstract caricature by Billy Idol looks like it might have been drawn on a paper tablecloth at a Hard Rock Café and then was shrewdly collected by an observant waiter. Nevertheless, the drawing is an excellent likeness. There is also a self-portrait by The Doors lead singer Jim Morrison done when the Lizard King was still in High School. Morrison portrays himself as a monstrous ogre.

Michael Jackson’s self-portrait sketch is similarly revealing in that the famously emotionally fragile singer draws himself with his face obscured by a hat and his signature glove, yet manages to make it a recognizable self-portrait.

Not all the musician/artists rely on their famous faces and musical credentials to promote their art. The exhibition includes a large abstract canvas by Kiss guitarist Paul Stanley as well as a selection of Ringo Starr’s “Star Canvas Series,” in which the Beatles drummer painted a star surrounded by splotches of color.

The exhibition is rounded out by the work of some professional artists who made a name for themselves in the music world. Alan Aldridge created such memorable art for the Beatles that John Lennon dubbed him “His Royal Master of Images to Their Majesties The Beatles.” Besides a psychedelic cartoon drawing of the Fab Four Aldridge is also represented in the show by a drawing of Lennon as a penguin. Aldridge has done album covers for The Who and Elton John’s “Captain Fantastic and the Brown Dirt Cowboy.”

Another seminal Rock music artist featured in the show is Stanley Mouse, who is represented by some of his iconic skeleton drawings that he used to illustrate album covers for The Grateful Dead. Mouse was also known for giving a ‘60s psychedelic touch to the Art Nouveau style originated by Czech artist Alphonse Mucha.

There is also a display  of photographs from the original Hard Rock Café in London showing appearances and performances by the likes of Led Zeppelin’s Robert Plant and Jimmy Page, Paul McCartney, Bo Diddley and Les Paul.