‘Prague Fatale’: in the crossfire of Czech resistance and the Butcher of Prague 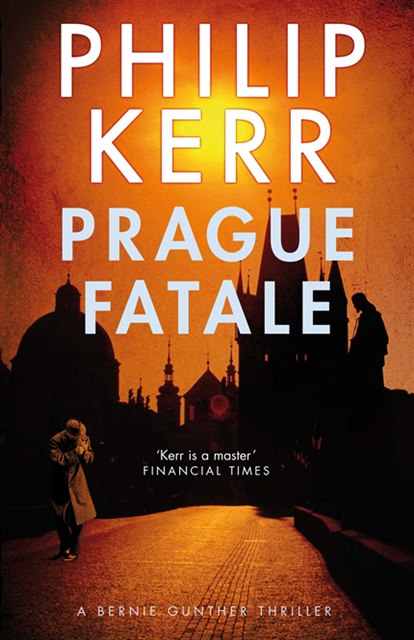 “And if I had really been as single-minded and independent as Heydrich said I was, I would probably have told him he was wrong: murder – even political assassination – is rarely ever committed by people who are anything but crazy; and, over the centuries, one way or another, a lot of crazy things had happened in Prague.” — Prague Fatale

Prague Fatale is the eighth book by Philip Kerr that follows hard-nosed Berlin homicide detective Bernie Gunther as he navigates his way between the world of everyday street murders and the much more menacing variety of killing ordered in Germany’s corridors of power. Trying to remain a decent cop and decent person working under the Nazis takes its toll on Gunther, and he often wonders if he can pull it off. “But mostly I just blamed myself for thinking it was even possible to behave like a real detective in a world that was owned and run by criminals,” he thinks to himself at one moment.

The story takes shape under the sinister shadow of Reinhard Heydrich, the Reichsprotector of Bohemia and Moravia known as the “Butcher of Prague.” Heydrich’s 1942 assassination and the brutal reprisals that followed make up one of the key moments of modern Czech history, and the book opens with a scene of Gunther escorting Heydrich’s body back to Prague. In fact, the novel was initially going to be titled The Man with the Iron Heart after Hitler’s description of his close associate – a description Gunther evidently agrees with, while obviously preferring more human hearts made of flesh and blood.

The main action actually takes place before the assassination, in September 1941, when Hitler sent Heydrich to Prague, Jews first became obliged to wear the yellow star, and when Gunther begins investigating the gruesome death of a Dutch railway worker. These seemingly disconnected events later reveal themselves to be part of a web of violence and subterfuge once the story makes its way across the Czech border.

The initial connection to Prague comes in an unwelcome visit to Gunther’s office by the Gestapo, who suspect that a corpse found in a Berlin park is a member of a Czech resistance organization. When he protects a nightclub hostess from an apparent rape attempt and strikes up a romance with her, another thread is cast that will eventually come to fruition in the occupied Czech capital. The action moves to Prague when Gunther is given the assignment of serving as Heydrich’s bodyguard against attacks from rival Nazis. Bringing his new girlfriend with him, the seemingly clear-eyed cop has no idea what he is getting himself into.

What makes Prague Fatale so effective is how Kerr places a highly conventional detective whodunit in the midst of a highly unconventional, genocidal war. A policeman happens to be present at a country manor house when a dead body is found in a room that was locked from the inside. That it sounds like a plot out of an Agatha Christie novel is entirely intentional.

The real-life manor house in question is located 14 kilometers outside of Prague, in the village of Panenské Břežany. Formerly owned by the wealthy Jewish industrialist Ferdinand Bloch-Bauer, it was taken over by the Nazis during the war. Gunther actually meets the murder victim of the detective segment of the novel (there are numerous murders shown or referred to in the book) while looking at Gustav Klimt’s famous painting of the former owner’s wife, Adele Bloch-Bauer.

Unlike in an Agatha Christie novel, though, the reader is well aware that none of the swastika-wearing suspects deserves to be called innocent, and Kerr even offers flash forwards of the executions and suicides most of them would be subjected to following the end of the war. The bitter rivalries and mutual distrust among the Nazi high command is dramatically rendered as the investigation moves forward.

But as Gunther works his way towards identifying this specific killer among a house full of mass-murderers you realize that the murder he is investigating pales in importance not only to the mass killings taking place in the East, but even to the Germans’ anti-espionage efforts against the Czech resistance.  The espionage and resistance elements of the book were historical events, and Kerr deftly weaves together the historical and fictional elements in the story.

The Czech resistance group the Germans are hunting down in the book were the Central Leadership of Home Resistance (Ústřední vedení odboje domácího, ÚVOD) and their chief target is the last of the Three Kings (Tři Králové) resistance fighters remaining at large. The other two, agents Josef Balabánand Josef Mašín are already in Gestapo custody, with Balabán’s execution occuring on October 5, while Josef Mašín was executed in revenge for Heydrich's killing in '42. Their last target is an agent named Melchior whose identity they eventually discover to be Václav Morávek.

The spy hunting going on largely plays out in the background of the detective story, only gradually seeping through to the surface as Gunther unintentionally plays the role of a stereotyped detective: questioning suspects in the stately Morning Room, even briefly wondering whether the butler did it.

Sometimes Kerr pushes the envelope a little too far with the repeated mentions of Agatha Christie, such as when Gunther refers to an interrogation as “some bullshit scene in a crappy detective novel by that English lady novelist Heydrich seems to adore so much.” There are also moments where Gunther’s tough guy approach toward the effete and often affected Nazis gives the impression of a Hercule Poirot novel in which the Belgian detective has been replaced by Sam Spade.

Kerr clearly wants Gunther to be likeable to the modern reader, but some of his hero’s admirable sentiments and actions feel a bit forced. Would a tough Berlin cop working in the house full of Nazi top brass really object to a homophobic comment by pointing out that they are just like us? And angrily sticking up for a Jewish passenger to be able to keep his seat on the train seems likewise unrealistic.

From the beginning of the book, it’s clear Gunther professes a deep sympathy with the Jews, even claiming their fortitude is the only thing preventing him from committing suicide after his witnessing and participating in atrocities on the Eastern Front. Neither his sympathy nor his suicidal tendencies are expressed very convincingly, though, and Gunther’s presence is strongest when he is in the thick of external events.

Murder and violence are constant presences in the story, yet the brutality surrounding Gunther at the country manor house is more like a dark cloud hovering over them than an immediate reality, and it doesn’t break through with force until a late scene in the torture rooms of the Gestapo’s Prague headquarters. What happens in the dungeons of the Petschek Palace (Petschkův palác, which Kerr writes as Pecek Palace) finally gives the horrors taking place all over Europe a tangible shape for the reader and ultimately allows Gunther to put a specific name and face on the millions of victims who died at Auschwitz.

The atmosphere of wartime Berlin with its blackouts and shortages is effectively evoked while the Czech backdrop is mostly only hinted at as the plot more or less takes over the latter half of the book. A brief mention of off-duty German soldiers taking photographs of Prague’s famous astrological clock is a familiar sight for any visitor or inhabitant of the city today, though Kerr does get a few local details wrong.

Having Gunther arrive at Prague’s Masaryk Railway Station is inconceivable during the German occupation as the station was renamed Prag Hibernerbahnhof after its location on Hybernská street. The same is true of the reference to Hoover Street (Hooverova ulice), it being extremely unlikely that the Germans’ would keep a street named after an American president. In fact, the street was rechristened Richard Wagner Street from 1940 to 1945, and today is named after a more widely-respected US president, Woodrow Wilson.