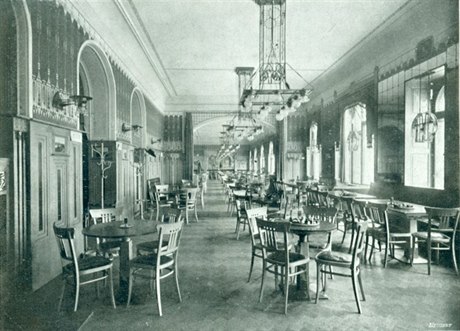 Prague's Café Louvre back at the turn of the 20th century foto: © Cafe Louvre, Česká pozice 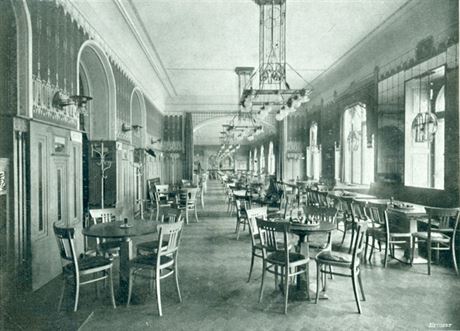 “When the great actor Norinski entered the National Café, which is located in front of Prague’s Czech Theater, at three o’clock in the afternoon, he started a little – but then immediately smiled his most disdainful smile.” This is the opening line of the short story “King Bohush” by the poet Rainer Maria Rilke, in which he parodies the Czech intellectual scene through the title character of an ill-fated hunchback. The haunt depicted is none other than Prague’s famous Café Slavia, a favorite of artistic and intellectual Czech society from its opening in 1881 to the present day.

The vital role played by Prague cafés in intellectual history goes beyond the sphere of the Czech capital and nation to a truly global prominence. The most notable figure in this respect is Franz Kafka, though the city’s café-goers have included a wide variety of artists, philosophers, novelists and the Czech Republic’s first president, Václav Havel.

Havel’s dissident circle were habitues of Café Slavia and occupied the table below Viktor Oliva’s painting “The Absinthe Drinker” (pictured). The group were called the ’36ers because a majority of them were born, like Havel, in 1936. Fellow regulars included playwright Josef Topol, writer Věra Linhartová, poet Jiří Kuběna and writer Pavel Švanda, among others. It was at Slavia in 1953 that the 17-year old Havel met his future first wife, Olga Havlová. The café was further immortalized in the poetry of Nobel prize-winner Jaroslav Seifert and even had a novel take its name in “Café Slavia” by Ota Filip.

Later generations of rebellious artists that made Café Slavia their meeting point included the visual artists of the Tvrdohlaví Group, which boasts Petr Nikl and Stanislav Diviš as well as students and teachers at the neighboring Film and TV School of Academy of Performing Arts in Prague (FAMU) such as Miloš Forman, Jiří Menzel and Věra Chytilová.

The café’s post-communist life remained turbulent, with new American owners closing it up to the general chagrin of the local population. In 1993 President Havel entered the fray, reading an open letter threatening that its continued closing could “seriously damage the relations of Prague’s intellectuals towards capitalism and the US.”

When the various conflicts were finally resolved and Café Slavia was re-opened for good, renovated in the art-deco style it had exhibited during the 1930s, Havel declared the event “a small victory over stupidity.”

Just up Národní street from Slavia is Café Louvre, a former haunt of Kafka’s when he participated in the philosophical discussions of the Brentano Circle, a group that met there to discuss the ideas of philosopher and psychologist Franz Brentano.

The expansive, elegant café with its billiards room has been home to the formation of many influential groups of artists and writers. It was at one of its tables in 1925 that Karel and Josef Čapek founded the Czech branch of PEN, the international literary and human rights organization founded four years earlier in London. Another group that came into being at Café Louvre was the Sursum art association, which was founded by modern symbolist painters Jan Zrzavý and Josef Váchal, among others. Renovated in 1992, the café remains a meeting point and secondary office space for Czech notables including Foreign Minister Karel Schwarzenberg.

Café Montmartre (Řetězová 7, Prague 1) wasn’t originally a café at all but a wine bar and cabaret. When the building that originally housed Montmarte was put up for bidding in the year 2000, Iva Nesvadbová and husband Milan Jaroš presented the winning historical reconstruction plan including a period café, basement theater and first floor art gallery. The new Café Montmartre opened in 2001.

Besides its student regulars, the café is popular with local artists and intellectuals, even hosting a weekly Thursday meeting of Czech Surrealists, a group that includes filmmaker and animator Jan Švankmajer. Other regulars included Czech actor Vlasta Burian and Austrian author of The Golem, Gustav Meyrink.

Besides the period atmosphere, the café’s walls are lined with old photos of the cabaret performances that took place there, which the owners found in the archives of the National Museum. One of the photos shows the then popular “bear dancing” (medvědí tanec) in which participants aim to imitate a Carpathian mountain bear. The cabaret also happened to be the first site in Prague where the tango was danced. Nesvadbová says that Jaroslav Hašek, author of The Good Soldier Švejk, was also a daily visitor of the original Montmartre.

While direct comparisons between the present and past incarnations of cafés are usually impossible to make Café Montmarte actually had a regular able to compare the two incarnations. Writer Lenka Reinerová was a close friend of Egon Erwin Kisch. As a Czech, Jewish, German-language writer, Reinerová typified the intellectual mix that existed in Prague before the war. Up until her death in 2008 at the age of 92, she was a regular guest at Café Montmartre.

“She said it was just like it had been in the old days,” Nesvadbová said. “She said it had the same feeling, so we were glad that she approved.”

Of all Prague cafés the Grand Café Orient has the most splendid setting, occupying the first floor of the House of the Black Madonna, the city’s most famous work of cubist architecture designed by Josef Gočár. Opened in 1912, the café shut down in the early ‘20s but was renovated in 2005 using what was left of the original plans and modelled on photographs of the original. The café is fitted out with replicas of the cubist furniture designed that Gočár designed for it, with numerous examples of original cubist furniture in the Museum of Czech Cubism that occupies the upper floors of the building.

The Café Imperial is another historical Prague café with a literary connection of its own. In tribute to Zdeněk Jirotka’s 1942 comic novel Saturnin customers used to be able to pay Kc 2,000 for a plate of day-old doughnuts that they were then allowed to throw at whomever they chose. The tradition was discontinued about five years ago, presumably due to the volatile combination of designer suits and red or orange jelly.

At the other end of the spectrum from comedy, the café and its adjoining hotel were a setting in Philip Kerr’s recent historical crime novel Prague Fatale. You can also see the café’s stunning tilework (prior to its latest, disappointing reconstruction) in the 2006 film “The Illusionist” starring Edward Norton (though like the Prague Castle among other locations, it is merely a stand-in for Vienna in the film).

Not all of Prague’s legendary cafés have survived the test of time. At one time Café Arco was the base of the city’s German-speaking writers, a group that included Kafka and his closest friends as well as Franz Werfel and Egon Erwin Kisch. The café and its literary inhabitants became so closely associated that the Viennese writer and satirist Karl Kraus mocked the café’s “Werfel-s and Brod-s and Kafka-s and Kisch-es,” dubbing the group the Arconauts.

Today, Arco is run by the Ministry of the Interior and serves reasonably-priced meals to policemen and government bureaucrats, making it highly likely that the conversations are quite different than they were a century ago.

While there is an elegant, old-style Café Savoy in Prague it has nothing to do with the historical café in which Kafka famously discovered Yiddish theater and began a frienship with Yiddish actor Yitzchak Lowy. It might be just as well, as the Savoy of a century ago was a dingy place on the edges of the Jewish Quarter with a doorman, Kafka noted in his diary, “who used to work in a brothel and is now a pimp.”

Also gone is the Café Union, called Unionka, home to the Devětsil Artistic Federation whose work recently went on show at a major US retrospective. The café was initially going to be closed in 1923, but the writer Karel Čapek organized a petition in daily Lidové noviny that kept it alive until its demolition in 1949. Other cafés lost to time include the Café Continental, Café Corso and Café Central.

In his diaries Kafka recounts an afternoon excursion across the Stone Bridge, as he called it, to the Kleinseite (Malá Strana) and on to what was once the Café Radetzky in Malostranské náměstí. “I still saw the prospect of a good mood, so that really there was not much fault to find with me,” was how he concluded that day’s entry. Were he to return to that site today his prospect of a good mood would be significantly lower, for following a post World War I name change to Malostranská Kavárna it has gone an even more drastic renovation and is currently the site of Prague’s first Starbucks.

Even Café Slavia hasn’t escaped the traces of commercialism as most of its large windows have the words Coca-Cola stuck on them just below a lure for tourists in the sweltering summer heat that the café is equipped with “Air Condition.”

In spite of the encroachments of the less intellectual modern world, Prague’s cafés retain some of the lost splendour of former times, as well as some appeal for today’s writers and artists. The evocative opening to contemporary Czech novelist Michal Ajvaz’s short story “The Past” shows that the city’s cafés  remain on the literary map, and that Havel’s small victory over stupidity continues to pay dividends:

“I'm sitting at the Slavia, people-watching.  In one corner I recognize the pointed bird-like profile of the man who one stormy night, Malay dagger in hand, chased me past locked compartments along empty corridors of the Orient Express.”

Václav Havel | Franz Kafka | Miloš Forman
Vstoupit do diskuse (1)
Registrace: smskou dopisem
A Concerned Citizen Great article... thanks! Thanks for this excellent article and the photos.... 9:10 1.2.2012