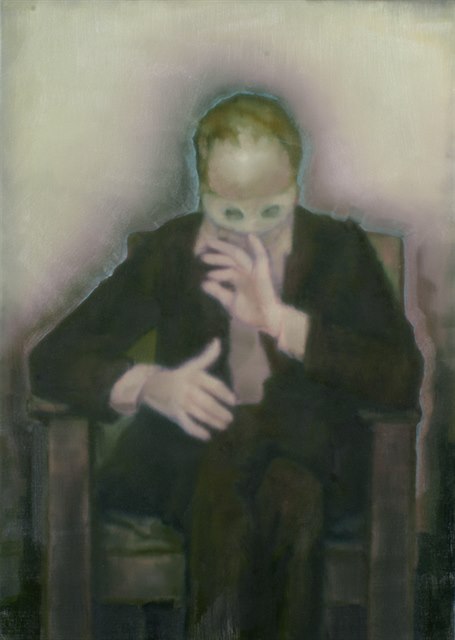 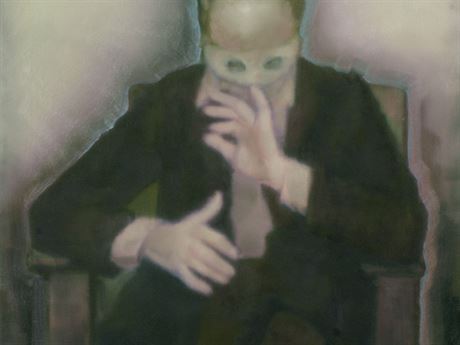 Faced with an onslaught on one side from our high-tech culture of digital and video images, and on the other from the art world preeminence of conceptual art, the irrelevance of painting has been loudly proclaimed at various times over recent decades. In spite of everything a taste for viewing pigment on canvas remains intact, with painting playing a prominent role at the current Prague Biennale.

And while much of the painting on display at the biennale is too uneven to dispel any dire prognoses that the art form may face, there are two strong shows that provide a signpost to where painting stands in the 21st century, and where it might be headed.

Portraits of Power curated by Jane Neal showcases five painters related to Hungary either by ethnicity or who live and work there. Entering the exhibition space after having passed through a large section of the biennale devoted to the often colorful, extravagant and ironically exotic art of India, the Hungarian painting provides a distinctly Central European atmosphere, displaying both continuity and innovation, as well as the tug-of-war that often takes place between them.

Peter Sudár’s muted portraits are both mocking and traditional, displaying figures in a renaissance style of portraiture, yet with modern additions such as sports equipment or the slight indication of a wristwatch. Moldovan painter Alexander Tinei paints with an almost photographic realism in places, then veers away sharply in different directions, such as in Man with Glasses, where he goes into full-fledged abstraction.

The haunting, ghostly figures of Attila Szűcs evoke less the idea of power proclaimed by the exhibition title than that of memory. Szűcs told Czech Position that his process of painting resembles the way memory works, often going back over incidents and revising them. The painter admits that he doesn’t love the act of painting itself and starts each work hoping to finish in a relatively short time, as much to preserve the freshness and vitality of his initial idea.

“It almost never happens, unfortunately. On the other hand, I’m quite stubborn. So if I’m not satisfied with my work, I’ll leave it aside for a time — for two, three or four weeks, say — and then start again. And sometimes again and again,” Szűcs said.

This way of working plays a major role in the paintings themselves, as Szűcs might end up painting over most of the initial elements in the work so that there might only be faint traces of them still visible. In Repainted Figure with Wreck this aspect is actually brought to the fore, as a phantom-like man holding a mask stands in front of the virtually abstract wreck of the title.

For Szűcs, the layers of a painting are one of the stories it tells. Another work in the Biennale that displays this trait is Pulling Gloves, in which a painting of two seemingly disembodied sets of hands removing white gloves further reveals the ghostly outlines of the human figures they are presumably a part of. Szűcs insists that the appearance of the figures was unintentional.

“I was really surprised by what happened. It is like a faint trace of a memory, and I think it’s very important, maybe more important than what’s going on in the main motifs. And you can’t distinguish between the importance of the figurative and non-figurative aspects of the work.”

Szűcs sees the tension between figurative and non-figurative work as a vital line that contemporary painters need to follow. “If you are just a simple figurative painter, you will be a simple illustrator,” he said.

Woman in the mirror

The eight UK artists presented in Some Domestic incidents curated by Matt Price and Charlie Levine have a different yet equally interesting take on the issue of figurative versus abstract painting. By focusing on paintings set within domestic spaces — people’s houses and apartments — the exhibition finds a point of departure to a wide array of styles and sensibilities, from the architectural images of Graham Chorlton to the seemingly ordinary made unreal in paintings by Justin Mortimer and Sally Payen.

Entering the space the large canvases on the opposite wall could potentially distract you from the smaller paintings by Caroline Walker placed just beside the door. But a closer look at these images of women, often seen in multiple reflections of mirrors in the rooms, presents another striking and original example of representational painting taking on elements of abstraction.

“This is something I'm starting to explore through my current body of work using mirrors and reflections. I’ve been trying to break down the spaces in my paintings so that there isn’t such a discernible figure/ground relationship, forcing the viewer into a more complex position,” Walker told Czech Position. “I think this place between figuration and abstraction leaves us in a painting space that has a tension between fact and fiction, which seems to echo the position of painting itself.”

For Walker, using mirrors allows for bringing additional figures into the space without including them in the narrative. The multiple images also comment on the representation of women throughout art history: In one work, the model is seen in the same posture as a Degas ballet dancer in a painting hanging behind her.

Walker’s work arises from taking a life model into rented houses and having the model dress up in different costumes and enact different “feminine” activities such as housework or putting on wigs, as can be seen in the paintings Conservation and the theatrically titled In the Round.