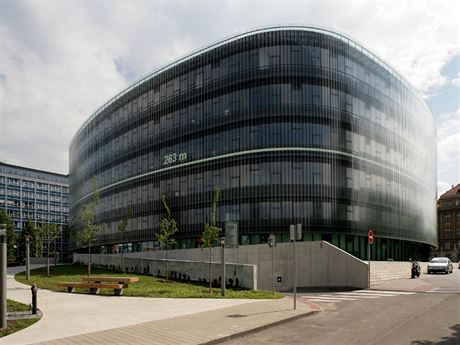 The National Technical Library (NTK) in Prague 6 was the first large public building to be erected in the Czech capital in almost 20 years. The critically acclaimed new library, which opened in 2009, should be an object of pride for the city. Yet it is also the cause of some embarrassment — an inspection by the Supreme Audit Office (NKÚ) into the realization of the project, first and foremost the financing thereof, has drawn damning conclusions.

NTK director Martin Svoboda categorically disagrees with the findings of the NKÚ report. He says that while the building would probably have been cheaper had it been financed not by the private sector but from the state budget — or money from the European Investment Bank (EIB) — the latter option was only theoretical.     The plan drawn up by the MŠMT counted on finding a strategic partner capable of completing the construction by June 2006

The government approved the construction of the NTK in 2000 after it agreed that the arrangement whereby the old State Technical Library — renamed in June 2009 — rented space from the National Library in the historic Klementinum complex in Prague’s Old Town, was not desirable. Additionally, renovation of the Klementinum, once the largest Jesuit college in the world, was planned.

In 2000, the cost of the new NTK was estimated at just under Kč 1.5 billion, but lack of finances prevented implementation. The Ministry of Education, Youth and Sports (MŠMT) and the management of the technical library negotiated methods of financing for the following two years. The first option was financing from the state budget, the second — credit from the developers. Eventually, the second option was chosen despite the estimated cost being higher because the education ministry didn’t have the funds required.

Early in 2004, the government reviewed the updated timetable for the construction of the new library building. The plan drawn up by the MŠMT counted on finding a strategic partner capable of completing the construction by June 2006 and providing long-term credit that would be paid by 2010 in installments of Kč 300 million.

The first round of the tender for a strategic partner was announced in 2004, but due to appeal proceedings and delays in preparation of project documentation, the second round of the tender didn’t begin until March 2006. It was therefore obvious that the originally-planned completion date in June 2006 would not be met.

From the five bidders the management of the NTK and the education ministry chose the Sekyra Group, which submitted an offer of Kč 2.1 billion including VAT. The new library building received post-construction approval in November 2008.    The NKÚ concludes that the financing model for the construction of the library was not a success

In its report published at the end of February, 2011, the NKÚ concludes that the financing model for the construction of the library was not a success. “The overall costs of the construction were raised during building work in the form of amendments to the total amount of Kč 2.377 billion including the costs of preparation of the project from 2000,” the NKÚ says. The period of repayment of the credit provided by the strategic partner was prolonged until 2013.

“From the very beginning, it was clear that the library wouldn’t be a cheap proposition. But we tried to keep the costs as low as possible, that’s why there are no dividing walls in the library. What’s more the running costs are very low,” NTK’s Svoboda told Czech Position. “It’s not true that that the price was raised during construction,” he added.

According to Svoboda, then-minister of education Petra Buzková (Social Democrats – ČSSD) and then-minister of finance Bohuslav Sobotka (ČSSD) agreed that the strategic partner would deliver the building ready for use for approximately Kč 2.1 billion. “The NKÚ included the costs for preparation of the project from 2000,” Svoboda says by way of explanation as to why the NKÚ’s inspectors calculated the higher price.

The NKÚ says details, including designer furniture and fittings, resulted in the higher overall cost of the project. The reading chairs cost more than Kč 8,000 each, office seats Kč 35,000. The reading tables cost from Kč 32,000 up to Kč 450,000. “The furniture in the public sections of the library was delivered by the company Vitra. We wanted quality furniture which would last and be the same in 20 years time,” Svoboda explains, adding that in the administrative sections the furniture provided by the firm Techo is cheaper.   The education ministry didn’t compare the financing and construction of the library by a strategic partner with a classic public tender.

What appears to be the most serious finding of the NKÚ inspection is the fact that the education ministry didn’t compare the financing and construction of the library by a strategic partner with a classic public tender. According to the NKÚ, such a theoretical comparison is compulsory for public - private partnership projects because, first and foremost, it should reveal whether such a model is the optimal choice.

“The estimated overall cost for the realization of the project was raised by Kč 786.6 million, nevertheless construction was not expedited. The inspection revealed that the chosen method of financing the construction was not appropriate, nor financially advantageous,” the NKÚ report states.

A Rolls-Royce among libraries

According to Czech Position’s information, there’s another reason why the project was so expensive: “Nobody supervised the architects and therefore they proposed a monument without taking into account the acquisition price and the running costs. Also the technology implemented was something like the Rolls Royce among libraries,” a source who chose to remain anonymous told said.

The NTK’s director, however, says that the overall cost of the library corresponds to that of similar buildings constructed in other countries. “The library in Estonia was cheaper, while in France it was more expensive,” Svoboda said.

Nevertheless, Svoboda admits that in theory the project could  have been cheaper, though he says that it remains questionable Rumors circulated that then-prime minister Vladimír Špidla was having a house builtwhether in practice another financing method would have been better value. “The European Investment Bank offered a loan with an interest rate of 3.5 percent, but it demanded a guarantee from the state and the government didn’t provide it. Moreover, that credit would have had raised the national debt,” Svoboda states.

Pavel Hrnčíř, a member of the NKÚ collegiate, says that the inspection did not reveal anything that merits the filing of a criminal complaint. “We’ve sent the findings of the inspection to the Government Office,” Hrnčíř said, though he added that financing from the state budget would have been preferable. “If the project had been financed from the state budget, it would have been possible to monitor the fulfillment of the contract. But in the case of the National Technical Library, everything was directed by the strategic partner,” Hrnčíř claims.

At the time when the National Technical Library was in the planning stages, rumors circulated that then-prime minister Vladimír Špidla (ČSSD) was having a house built into which he planned to move when his mandate ended. In retrospect he can be glad that he got a job in Brussels as a Euro-commissioner.