PPF ‘ready’ to immediately stabilize and take over Sazka

The latest proposal to declare Sazka bankrupt came from Roman Ječmínek, vice chairman of the lottery firm’s board of directors 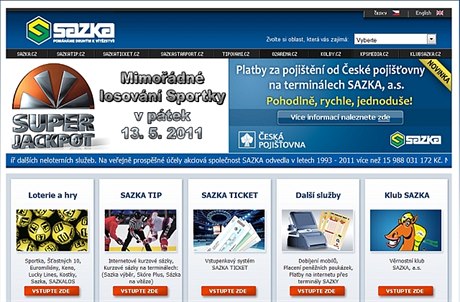 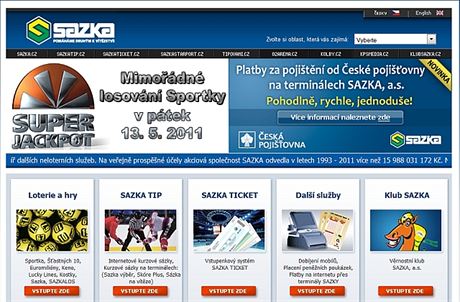 “The PPF group announces that it has taken over from Radovan Vítek the creditor’s position in Sazka, a.s.,” PPF said in a press release. “At the same time, PPF confirms that it has coordinated its steps with the other creditors, the KKCG group [of Karel Komárek] in particular.”

The announcment comes on the heels of a dramatic step by Roman Ječmínek, the vice chairman of Sazka’s board of directors; owing to Sazka’s growing indebtedness, on Monday he submitted to a court his own proposal for declaring the company bankrupt.

Sazka’s current cash flow has been significantly affected by the halt of revenue from its terminals’ operators, who are worried they will not recover their deposits; in most cases, the deposit on a single terminal amounts to tens of thousands of crowns. Accordingly, the lottery company previously collected approximately Kč 300 million from its partners. A number of them have already ceased accepting bets.

The Municipal Court in Prague has been expected to rule on April 21 on the three insolvency proposals it currently has on the table, but on the basis of Ječmínek’s proposal, the judge could accelerate the process. The other submitters and Sazka’s significant creditors Radovan Vítek (who filed his proposal on Jan. 17) and Karel Komárek, Jr. (proposal filed on Feb. 15) are in favor. An extraordinary session of Sazka’s board of directors met yesterday to discuss the current situation. Sazka chairman Aleš Hušák, who was hospitalized after the general meeting last week, was expected to attend. Ječmínek is now on holiday.

At the end of last week, when all three mobile phone operators in the Czech Republic suspended cooperation with Sazka and ceased offering recharging of subscription cards through its terminals, the lottery firm pressed the court to permit conclusion of contracts on credit and cooperation with the firm Gladiolus, backed by the Penta financial group and Martin Ulčák’s E-Invest.

Ječmínek drew the attention of the then insolvency administrator Josef Cupka and the court responded with a preliminary ruling. On the basis of this ruling, all contracts to be concluded exceeding half a million crowns and disposal of the company’s immovable assets are subject to Cupka’s approval.

The loan of up to Kč 2.5 billion would, according to Sazka’s management, ward off insolvency and make it possible to pay off all active debts (on Monday, drafts of the two contracts were made public in the Insolvency Register). Yet the Cooperation Agreement would hand over all the power over the company’s management to a “restructuring committee,” in which Gladiolus’ representatives would have the main say. Owing to the securing of the credit by a 5 percent package of shares, in the case of failing to meet the yearlong maturity there would be the threat of Sazka coming under the control of Penta and E-Invest.

This, however, does not appeal to Komárek and Vítek, who would like to participate in the lottery company’s “rescue” as its significant creditors. Through their firms, they have registered mature debts exceeding Kč 800 million. Therefore, the two billionaires welcome Ječmínek’s proposal, which also contains a request for permission for the company’s restructuring under the creditors’ supervision.

“The court should decide about bankruptcy really quickly. I expect the other members of Sazka’s Board of Directors, including Aleš Hušák, to join Ječmínek’s proposal too,” Vítek told news server iHNed.cz.

Komárek’s KKCG group voiced a similar opinion of the proposal.  “[The group] considers this step appropriate and the only legally feasible measure making it possible to rescue the lottery company and to protect all its creditors. Dr. Hušák and the other members of the Board of Directors should voice their opinion on the proposal without delay,” it said in a press release.

The KKCG group also said it is also prepared to “implement its offer for financial support along with the other creditors in compliance with the insolvency law and, following agreement, to provide financial sources for financing Sazka’s needs forthwith.”

The preliminary agreement between Sazka and Gladiolus, and Penta and E-Invest, should theoretically not fall by the wayside even if the court were to declare the lottery company bankrupt. The debtor is the first to submit a possible plan for restructuring if its creditors agree with it. Yet the plan must be approved both by the creditors and the insolvency court. Subsequently, the creditors supervise its fulfilment. In  case bankruptcy is announced, they can definitely write off part of their debts.

What should the Finance Ministry inspection ascertain?

At the moment, the Finance Ministry is also carrying out an inspection at Sazka. Its state supervision of lotteries, or the revenue authority, is ascertaining whether Sazka still meets the conditions for possessing a lottery licence. As has been revealed, the so-called surety that Sazka had to give to the state in the case of numerical lotteries is merely Kč 50 million. “This is the first case we have encountered in which a surety will not suffice to satisfy all debts from lottery activities,” Karel Korynta, the head of the state supervision of lotteries, told Czech Position.

At the same time, he pointed out that the lottery law and the game plan, which is part of the license granted for operation of lotteries, do not rule out this evident insufficiency of the surety and said that “it is nothing unusual.” That is a truly alarming finding. All the more so in that the surety does not only serve for possible satisfaction of all the winners (i.e., not only the Kč 100 million jackpot) but also possible debts toward the state and municipalities.

Korynta considers the inability to pay out prize money one of the serious reasons for possible withdrawal of the license for operation of lotteries. “I don’t want to prejudge, an administrative procedure would take a decision,” he added. This could last up to 150 days. The winners have a 90-day deadline for registration of their prize, followed by a 60-day deadline during which the operator must pay out the prizes.

With regard to the current situation, Sazka’s allurement on its website appears to be considerably optimistic. The company entices betters to a “Super Jackpot,” which “could be yours!” The special lottery will take place – on May 15, 2011. … At the moment, however, Sazka does not even have money to pay the more than Kč 100 million jackpot from this January.