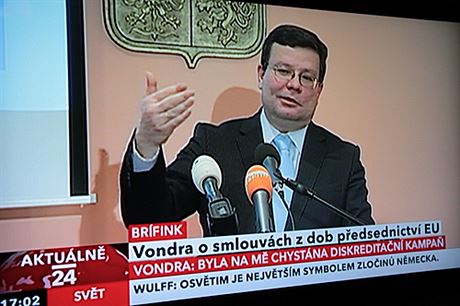 The barrage of scandals involving members of the center-right coalition government of the Civic Democrats (ODS), TOP 09 and Public Affairs (VV) has raised concern in more than four out of five Czechs, according to a poll by the Center for Analysis and Empirical Studies (SANEP).

The poll shows that, to varying degrees, the public (at least by a plurality of votes) would like all of the individual ministers associated with scandals to step down. The cases have sharply impacted trust in the overall government. “This situation is of course reflected in the evaluation of Prime Minister Petr Nečas (ODS). The Czech public no longer considers that his personality guarantees an effective fight against rampant corruption. This view is shared by a large number of supporters of the ODS,” the SANEP report said.

When asked if they were bothered by cases involving government officials in the Nečas Cabinet, some 70.7 percent said “yes,” and an additional 15.7 percent said “rather yes.” Only 7.5 percent said either “no” or “rather no.”

A full majority of 51.1 percent saw all the cases as equal threats to the credibility of the government. This was followed by 12.7 percent for the ProMoPro affair involving Alexandr Vondra (ODS), and declining figures for cases involving ousted Environment Minister Pavel Drobil (ODS), who already quit over the State Environment Fund (SFŽP) incident, Education Minister Josef Doběs (VV) and the worker bonuses brouhaha; and the ABL scandal with Vít Bárta (VV).

Another strong majority — 78 percent — said the current members pose a challenge to Nečas’ anti-corruption policy, while 12.4 said they did not. During the May 2010 elections, Nečas — dubbed “Mr. Clean” by the press — campaigned on a reform policy that included reducing government corruption.

“More than a two-thirds majority of the respondents (67.3 percent) currently do not trust the coalition government led by Petr Nečas, who is also accused of poor communication with the public,” the SANEP report said.

The publicized scandals of some ministers have affected the trust of 64 percent of people in the government as whole. “[This result] may amplify the negative perception of the government’s reform measures,” SANEP said. Some 27.1 percent claim their trust in government was not affected.

“A quite popular politician before, Petr Nečas is not a sufficiently strong personality to guarantee the implementation of his anti-corruption policies, according to 68.8 percent of respondents. This is obviously contributed to by the majority view that the prime minister is not too personally involved in the cases of his Cabinet members,” SANEP said.

Slightly more than two-thirds (67.4 percent) say that current Defense Minister Vondra — who was deputy prime minister for European affairs during the Czech EU presidency in 2009 — should step down, and 65.6 percent said the arguments he put forward to prove his innocence were “not true” or “not conclusive.” Overall, 67.5 percent said he was not a capable and trustworthy politician. Only 17.5 percent found him trustworthy and 8 percent felt he proved his innocence. Most respondents to an earlier poll said that Vondra should step down over ProMoPro.

Education Minister Doběs also should resign or be dismissed for his role in large and questionable bonuses to staff members, according to 54.6 percent of respondents. Only 26.4 percent want him to stay on. Some 63.3 percent find him an incapable or non-credible politician, and 63.6 percent say he is “not effective” in his post.

People were slightly more receptive toward Transportation Minister Vít Bárta and his former ownership of the ABL security company, which is alleged to have monitored politicians. Only 52 percent said the affair had a negative impact on his tenure in the Cabinet. Just 44.2 percent want him to step down, but even fewer — 39.4 percent want him to stay. A clear majority, 52.4 percent, however, say he is not capable or trustworthy.